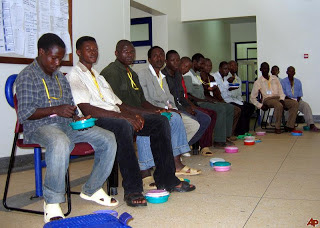 African men wait to learn about circumcision
We've heard it stated time and again: the push to circumcise Africa by white, Western profiteers ($$) is going to prove disastrous for the African peoples.

First, the trials ended early due to too many women contracting HIV after their male partners were circumcised (believing it would then prevent HIV transmission, among other STIs).

Then, we watched as numbers of HIV positive men increased in the areas we had conducted the trials - circumcised men were turning up HIV-positive.

Doctors in the know have reinforced common sense - circumcision does not prevent HIV.

Even if the African trials were statistically sound and valid (which they are far from being), they suggest circumcision reduces the risk of contracting HIV - but leaves a 40% failure rate. As intactivist, Joseph Lewis, recently pointed out, if we were to advocate for the use of a condom that had a 40% failure rate, we'd be laughed out of the room. In fact, your chances of contracting HIV in the first place (circumcised or not) are about 1 in 100,000 (or 1 in 1300 if you are having anal sex with another man). (1, 2) Use a condom, and your chances of remaining STI-free are 95% in your favor.

It is terribly unfortunate that not only are African men and women being lied to (male circumcision will *not* improve - but will hamper further - their sex lives, and it will *not* protect them from sexually transmitted infections), they are also the butt of one of the biggest pro-cutting jokes of all time.

This is 2010. We live in the nation that boasts not only the highest rate of sexually active adult men who are circumcised, but also the highest rate of adult HIV of any developed nation. Obviously we aren't doing too well here on the home front. Maybe we shouldn't be suggesting to others that the scalpel is a vaccine for AIDS. Because it isn't.

And now men in Africa are forgoing condom use, and female partners have little say in the matter, because they all believe that circumcision is the "new condom." In the process they are putting themselves, and their partners, in grave danger. More children who cannot be supported are being conceived (again, thanks to lower condom use) and born to parents infected with HIV.

Note that the healer interviewed for today's Times article even has a difficult time standing up to the big dogs in white coats. While he recognizes clearly that (1) circumcision is leading to more STIs in men and (2) they must continue condom use even after circumcision -- he cannot bring himself to say that circumcision is unnecessary and even harmful to these same men he is treating.

Lewis recently reminded us that when this circumcision hoax is finally over, the legacy left behind by the African pro-cutting likes of UNAIDS, UNICEF, WHO, Bill Gates, Bill Clinton, and those who promoted circumcision as HIV prevention policy will have the blood of many on their hands.

Lewis continued, "The absurdity is immediately obvious to me. What precisely are they smoking? Or is the wiping out of African men [and women] their intended purpose?"

Hmmm... brings me back to a question I had a few years ago when this all started. One which looks a whole lot like my ethical concerns of repeating another Tuskegee experiment. Except this time, instead of 399 black men from the poorest counties in Alabama being used as STI guinea pigs, we have several nations worth of individuals in our test tubes. Hopefully we don't spend 40 years on this 'experiment' as well - because we already know the outcome. 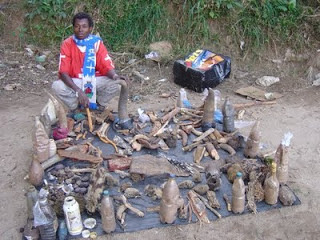 Traditional healer in Malawi - with treatments for sexually transmitted diseases after circumcision.

A traditional healer has related how he treats many men who have STIs due to their belief that after circumcision they will not contract HIV.

The healer, who wished to be identified only as Nkambule, said he had been receiving an influx of male clients who wanted to be treated for sexually transmitted infections.

He said when he questioned them on why they do not use condoms, the response was that they were of the view that because they were circumcised, they did not need to use one.

"Most of them then require me to treat them with my traditional medicine," he said.

Nkambule explained that in one instance his client asked him to prepare a concoction that would enhance his manhood, as he would not be required to use a condom since he had undergone circumcision.

"I always advise them to follow the laid-down procedures a person is expected to undergo after circumcision, but most of them insist that they be given traditional medicine. As a traditional healer, I support circumcision, but it is now clear that people have different understandings of it," he said.

Nkambule disclosed that he always advised his clients to test for HIV before opting for traditional treatment.

"After observing the condition of my clients, I always advise them to check their status so that the necessary treatment can be administered," he explained.

He said circumcision was introduced to reduce the chances of people contracting HIV.

He urged government to consider making circumcision compulsory, especially among the youth, but educate them that they still had to use condoms.

He said there was a need for the ministry of Health to educate people about circumcision because it was clear that it has not been well understood, especially in the rural areas.

Nkambule said, judging from the number of people who came to him after circumcision, it was clear that people have this strong belief that circumcision prevented one from getting a sexually transmitted disease.

"I treat people for different ailments, but the number of those who come with problems of sexually related diseases is increasing [as circumcision increases]," he said.

Government, through the prime minister’s office, recently affirmed the nation’s commitment in getting more males circumcised. 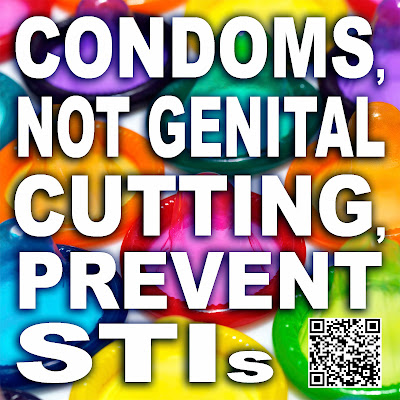 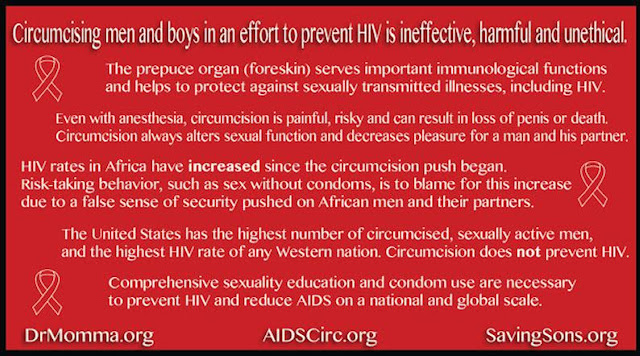