My Son and His Beautiful Shoes 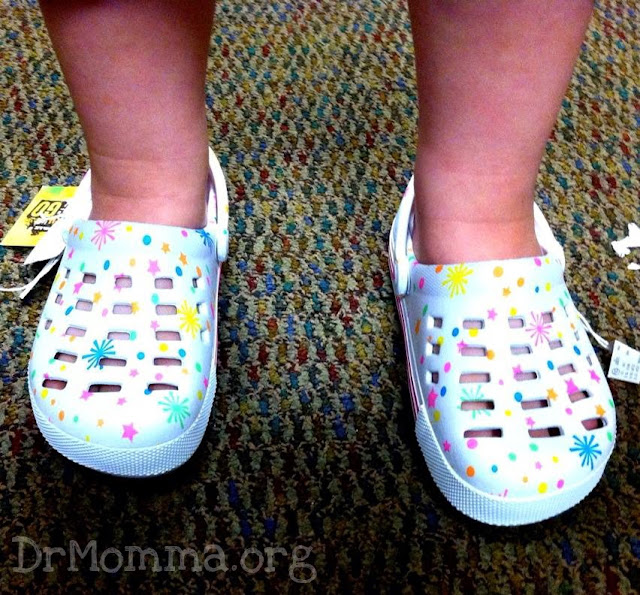 My son loves pink. Some days more so than any one of his other favorite colors. At almost-5-years-old his passion for 'beautiful things' has yet to diminish, and I love this about him. So I should have been better prepared for this day to eventually arrive... the day when another almost-5-year-old boy announced boldly to my son that what he likes, or what he wears, or what he finds 'beautiful' is NOT for boys, but for girls.

And it happened today. He wore his 'beautiful shoes' (the shoes that he picked out himself while we were traveling - those he says are his most favorite shoes ever, in the whole wide world - with pink and yellow and blue stars and stripes and splashes) to VBS for the second time. The first time he came home to tell me that his teacher told him she L-O-V-E-D his shoes. He was so happy. And proud. After all, he had scoured the whole store to find this one and only pair that fit his big, strong, wide Size 12 feet perfectly. And they weren't 'boring' like all the black and grey and dark blue shoes he was usually presented with.

Tonight, however, he came home to tell me that another boy had announced while behind him in line for the drinking fountain, "Your shoes are GIRL shoes!"

"How did you respond to him?" I asked, somewhat afraid of the answer, and at the same time trying to formulate my own thoughts and reactions into the most empowering mom-response for my 4 year old son... I didn't want to mess this up. And I was surprised by how unsure I was of the very best things to say when I - of all people - should know what to say. I had completed a graduate degree in Women's & Gender Studies and had always been positively certain I'd never have a child who was boxed or limited by others' cultural stereotypes and ignorant biases. Now here we stand, my son and I together with his beautiful shoes...

"I was drinking water when he said it," my son responded. "So I didn't say anything."

[Oh, stab through the gender conscious heart. From just one line, from just one little person, he received the message loud and clear that his shoes were made only for girls - and not made for him. Maybe, as a boy, he wasn't deserving of such beautiful shoes...]

"Honey, all shoes are made for all people - they are just shoes. Beautiful shoes are made for everyone. There is no such thing as 'girl shoes' and 'boy shoes' -- just shoes that we each get to look over and pick from -- the ones we love the most, the ones that feel good on our feet, and the ones we find fun to wear. Men and women, boys and girls, we can all wear any shoes we wish to wear."

"Do you sometimes wear Daddy's flip flops?" he asked. "Of course - they are fun and cushy on my feet," I smiled, knowing, however, that this is limited to quick runs outside due to our foot size difference...

"Would Daddy wear your shoes?" my son continued. "Sure he would - if his feet weren't so giant!" And we both laughed. Then I remembered an old photo I have of his father sporting my ultra-fabulous-flower-flip-flops. "Look at these beauties on Daddy's feet!" I smiled.

Phew, maybe we were moving past the stereotypes. 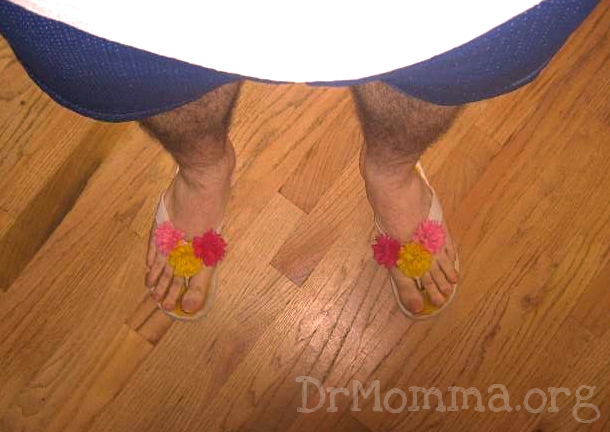 "Yeah... I don't know why that boy said that," my son seemed to be reflecting again on what happened.

"I don't know either," I said. "Maybe that boy was just a little jealous of your shoes because they are so cool!  Maybe no one ever gave him beautiful shoes to wear. If someone says something like that again, you can just say, 'That's silly. Beautiful shoes are for everybody.'"

The day following this discussion I was a little curious to see if my son would grab his beautiful shoes to wear as quickly when we got ready to go out on an adventure at the aquarium. I thought he may opt instead for his blue or grey shoes... But that didn't happen. He brought me his pink socks (well worn as they are one of two favorite pairs in his sock drawer) and his beautiful shoes and we slipped them on without a second thought.

I pray I can raise a son who is both wise and compassionate, strong and gentle. One who grows into a man who is sure of himself to the core, and able to empower others around him with this same steadfast consciousness.

What about you? How do you handle gender stereotypes as they are pushed upon your little ones? I am always interested to hear how other well-informed parents maneuver through the muck of cultural expectations our children face at such young ages in society.

Why I no longer believe babies should cry themselves to sleep

By Gabor Maté
Originally published at Globe and Mail

'Some of our friends see us as weak parents because we haven't Ferberized our children," says my niece Rachel Maté, a 33-year-old Vancouver lawyer and mother of two. " 'You're letting your baby control your lives,' they argue. But it would break my heart to let my baby cry without comforting her."

Named after Dr. Richard Ferber, the pediatric sleep expert quoted in a previous 2006 article on parents who share their beds with their children, Ferberization is the process of "training" an infant to sleep by ignoring her crying. As a family physician, I used to advocate the Ferber technique and, as a parent, practised it myself. Since then, I have come to believe that the method is harmful to infant development and to a child's long-term emotional health.

Ferberization seems simple: "After about one week, your infant will learn that crying earns nothing more than a brief check from you, and isn't worth the effort. She'll learn to fall asleep on her own, without your help," reads Dr. Ferber's advice. The question is, what else does a baby learn when treated this way and what is the impact of such learning?

People cannot consciously recall what they "learned" in the first year of life, because the brain structures that store narrative memory are not yet developed. But neuropsychological research has established that human beings have a far more powerful memory system imprinted in their nervous systems called intrinsic memory. Intrinsic memory encodes the emotional aspects of early experience, mostly in the prefrontal lobe of the brain. These emotional memories may last a lifetime. Without any recall of the events that originally encoded them, they serve as a template for how we perceive the world and how we react to later occurrences.

Is the world a friendly and nurturing place, or an indifferent or even hostile one? Can we trust other human beings to recognize, understand and honour our needs, or do we have to shut down emotionally to protect ourselves from feeling vulnerable? These are fundamental questions that we resolve largely with our implicit memory system rather than with our conscious minds. As psychologist and leading memory researcher Daniel Schacter has written, intrinsic memory is active "when people are influenced by past experience without any awareness that they are remembering."

The implicit message an infant receives from having her cries ignored is that the world -- as represented by her caregivers -- is indifferent to her feelings. That is not at all what loving parents intend.

Unfortunately, it's not parental intentions that a baby integrates into her world view, but how parents respond to her. This is why, if I could relive my life, I would do much of my parenting differently.

When the infant falls asleep after a period of wailing and frustrated cries for help, it is not that she has learned the "skill" of falling asleep. What has happened is that her brain, to escape the overwhelming pain of abandonment, shuts down. It's an automatic neurological mechanism. In effect, the baby gives up. The short-term goal of the exhausted parents has been achieved, but at the price of harming the child's long-term emotional vulnerability. Encoded in her cortex is an implicit sense of a non-caring universe.

The concepts behind Ferberization precede the publication of Dr. Ferber's 1985 bestseller Solve Your Child's Sleep Problem. Forty years earlier, Benjamin Spock proposed the very same approach in his seminal book Baby and Child Care. The cure for what Dr. Spock called "chronic resistance to sleep in infancy" is straightforward. The way to ensure that the infant doesn't "get away with such tyranny," he wrote, was to "say good night affectionately but firmly, walk out of the room, and don't go back."

Dr. Spock was a great pioneer of humane and loving child rearing and much of his advice refuted the harsh Victorian practices prevalent in his days. On this sleep issue, however, he ignored his own admonition that parents should trust their own instincts and gut feelings and not defer to the opinion of experts.

Monica Moster, an 80-year-old grandmother of seven, recalls what it felt like for her to follow such advice with her own children. "It was torture for me to do it," she says. "It went against all my motherly emotions."

Rachel Maté reports that even some of her friends who believe in Ferberization have a hard time of it. "I know women who have to stand in the shower with their hands over their ears so they can't hear their baby crying. It's traumatic not just to baby, but also to parent."

In our stressed society, time is at a premium. Beholden to our worldly schedules, we try to adapt our children to our needs, rather than serving theirs. More "primitive" aboriginal peoples in Africa and North and South America kept their infants with them at all times. They had not yet learned to suppress their parenting instincts.

The baby who cries for the parent is not engaging in "tyranny," she is expressing her deepest need -- emotional and physical contact with the parent. The deceptive convenience of Ferberization is one more way in which our society fails the needs of the developing child.


Vancouver physician, Gabor Maté, is the co-author of Hold On To Your Kids: Why Parents Need to Matter More Than Peers.