Nawal El Saadawi, Doctor and Warrior Who Devoted Her Life to Ending FGM and MGM, Passed Away at Age 89 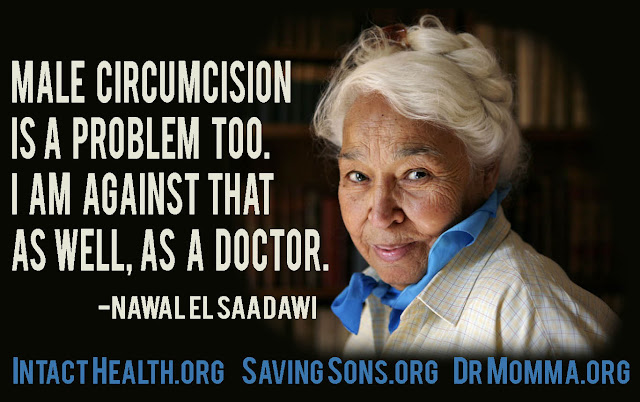 "Male circumcision is a problem too. I am against that as well, as a doctor." -Nawal El Saadawi
Nawal El Saadawi, who has been a lifetime warrior to end FGM, passed away today at age 89. Eleven years ago she specifically addressed the topic of ending MGM as well in an interview (below), and repeatedly through her life's work, she expressed that she wholeheartedly believed that the genital cutting of all children was equally as horrific, dangerous, and in need of being stopped. Nawal was a champion for the genital autonomy and protection of all babies and children, regardless of sex or age.
Related Reading:
The CUT (FGM Brief Documentary)
http://www.DrMomma.org/2009/09/cut-documentary-film-on-fgm-female.html
FGM Bill of the United States
http://www.DrMomma.org/2016/03/female-genital-mutilation-fgm-bill-of.html
Male and Female Circumcision
http://www.DrMomma.org/2011/04/male-and-female-circumcision.html 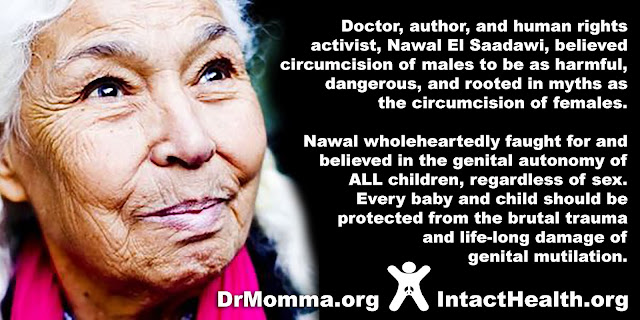 Nawal El Saadawi believed male circumcision was equally as wrong as female circumcision, and that coming together in solidarity for the genital autonomy of ALL would benefit both women and men across the board.
Archived Biography of Nawal El Saadawi
Nawal El Saadawi is a world renowned writer. She is a novelist, a psychiatrist, and author of more than forty books of fiction and non fiction. Her novels and her books on the situation of women have had a deep effect on successive generations of young women and men over the last five decades.
As a result of her literary and scientific writings she has had to face numerous difficulties and even dangers in her life. In 1972, she lost her job in the Egyptian Ministry of Health because of her book “Women and Sex” published in Arabic in Cairo (1969) and banned by the political and religious authorities, because in some chapters of the book in which she wrote against Female Genital Mutilation (FGM) and linked sexual problems to political and economic oppression. The magazine Health, which she founded and had edited for more than three years, was closed down in 1973. In September 1981 President Sadat put her in prison. She was released at the end of November 1981, two months after his assassination. She wrote her book “Memoirs” from the Women’s Prison on a roll of toilet paper and an eyebrow pencil smuggled to her cell by an imprisoned young woman in the prostitutes ward. From 1988 to 1993 her name figured on death lists issued by fanatical religious political organizations.
On 15 June, 1991, the government issued a decree which closed down the Arab Women’s Solidarity Association over which she presides and handed over its funds to the association called Women in Islam. Six months before this decree the government closed down the magazine Noon, published by the Arab Women’s Solidarity Association. She was editor-in-chief of the magazine.
During the summer of 2001, three of her books were banned at Cairo International Book Fair. She was accused of apostasy in 2002 by a fundamentalist lawyer who raised a court case against her to be forcibly divorced from her husband, Dr. Sherif Hetata. She won the case due to Egyptian, Arab and international solidarity. On 28 January, 2007, Nawal El Saadawi and her daughter Mona Helmy, a poet and writer, were accused of apostasy and interrogated by the General Prosecutor in Cairo because of their writings to honor the name of the mother.
They won the case in 2008. Their efforts led to a new law of the child in Egypt in 2008, giving children born outside marriage the right to carry the name of the mother. Also FGM is banned in Egypt by this law in 2008. Nawal El Saadawi was writing and fighting against FGM for more than fifty years. Her play “God Resigns At the Summit Meeting” was banned in Egypt during November 2006 and she faced a new trial in Cairo court raised against her by Al Azhar in February 2007, accusing her of apostasy and heresy because of her new play. She won the case on 13 May 2008.
Nawal El Saadawi had been awarded several national and international literary prizes, lectured in many universities, and participated in many international and national conferences. 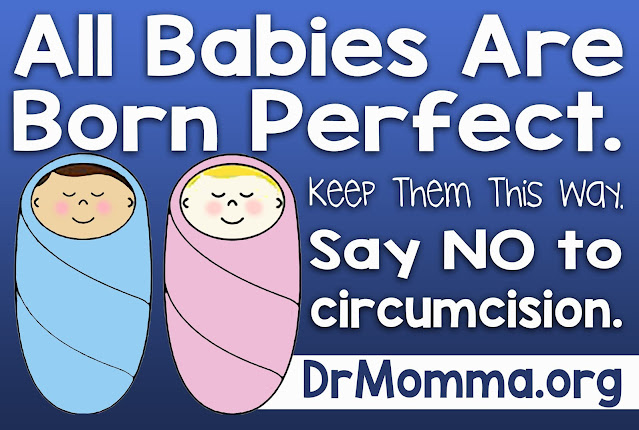 Awareness raising signs and materials at Etsy.
No comments: