Note: This article was originally published in French on Jan 15, 2010, in the Tribune de Genève. I've translated it into English below. 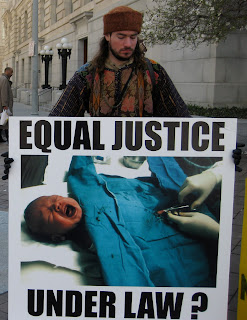 As Switzerland moves closer to a universal ban on all genital mutilation, male and female, Dr. Aldeeb, expert on the subject of circumcision for over 2 decades, encourages doctoral student research and action world-wide.

Circumcision interacts in a variety of ways with religion and social tradition, and impacts human health, sexuality, and the well-being of more than one billion people. Quite the explosive mixture. It took just a little information published in the press recently to set fire to the powder. As reported by Le Matin:

Although male circumcision is rare in Switzerland, in a scholarly article discussed this past Saturday, the delegates (in Switzerland) affirmed that "the Green Party firmly opposes the genital mutilation of girls and women, boys and men." And added that, "circumcision should be discussed without taboo." For Hättenschwiler Diego, the chairperson to the basic proposal, "circumcision is a violation of physical human integrity. It is a subject that has not been discussed much in Switzerland. We must break the taboo and talk."

The forthright manner of this information makes some pro-cutting Jews and Muslims uncomfortable.

How I wish I was there to hear various statements and see the faces of participants at the meeting of the Green Party! It reminded me of my first conference on female circumcision at the University of Geneva. It was part of a symposium on human rights of children held on Jan 30-31, 1993, organized by the Libyan Association North-South in collaboration with the Department of Sociology, University of Geneva.

My conference was scheduled for the end of Day 1. The audience was tired and ready to go. But no sooner did I start my lecture, I found a captive audience. Smiling faces among most, and others tightened. At the end of my remarks, half the room applauded and the other half was enraged.

Speaking, the chairman of the Libyan Association North-South, said angrily that he thought he had encountered the forgotten the episode of Salman Rushdie by attacking religious beliefs of others. To which I replied that I considered his remarks an insult and demanded that he withdraw them. My intention was not to attack the beliefs of others, but to protect children. Seeing that most of the audience was in agreement with my statements, the president apologized.

In preparation for that conference I met Dr. Leila Mehra of the WHO's Geneva office on Jan 12th. When asked why the WHO deals with female circumcision while often forgetting to deal with the human rights violation surrounding male circumcision, she replied: "Male circumcision is mentioned in the Bible. Do you want to create problems with Jews?"

The same day I met in Geneva with the President of Inter-African Committee, Ms. Berhane Ras-Work. I asked her the same question. Strangely, she gave me the exact same answer - word 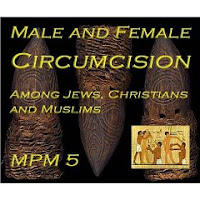 for word. This causes me to believe they must have discussed the matter (and their agreed upon answer) with each other, since the two were aware of my passing through their respective offices.

It was the beginning of my research on male and female circumcision, which lasted for seven years nonstop, and led to the publication of a lengthy book in Arabic, French and English. It is the largest book in any language on this subject.

I fully understand the distress of Jews and Muslims. Put yourself in their place:

- Abraham was circumcised at 99 years (it's clear in the Bible, isn't it?!), or at 80 or 120 years (less precise dates given among Muslims). Did he do something stupid?

- The rabbis, sheikhs, marabouts and other turbaned were simply charlatans?

- Physicians who have earned millions off circumcision surgeries and the sale of the prepuce have deceived us (or themselves)?

- The legislators who allowed this barbaric practice by their silence have been complicit in this crime?

- Are theological university professors who are paid for by taxpayers dollars ignorant people on this subject matter, who do not know any better?

- What about our professors of law who have never discussed this practice with their law students? Do they contribute to the violation of legal and ethical rights of human beings and human babies?

- All this suffering and cries of these children were therefore useless? Unnecessary? Harmful, even?

At the risk of disappointing you: You've been had. But this is not a reason to continue the same error. Better late than never.

I present an invitation to graduate students: this is an excellent topic for a doctoral thesis in law, psychology, psychiatry, sociology, medicine, theology, sexuality, development, pediatrics, religion, and philosophy. During my past years of research on this subject I have collected a large quantity of books and scholarly research documents on circumcision that I will gladly disperse and share.

It is time to wake up and rescue humanity of this horrific barbarity. Ignorance need not be a problem, if we choose instead to seek knowledge.

for bumper stickers visit the Intactivism Shop
For more by Dr. Sami Aldeeb, see his works published in the Tribune de Genève linked on this page or visit Dr. Aldeeb's website.

More on Judaism and circumcision

More on Christianity and circumcision