Circumcision and The United States Constitution: Forced Genital Cutting of Minors is Illegal 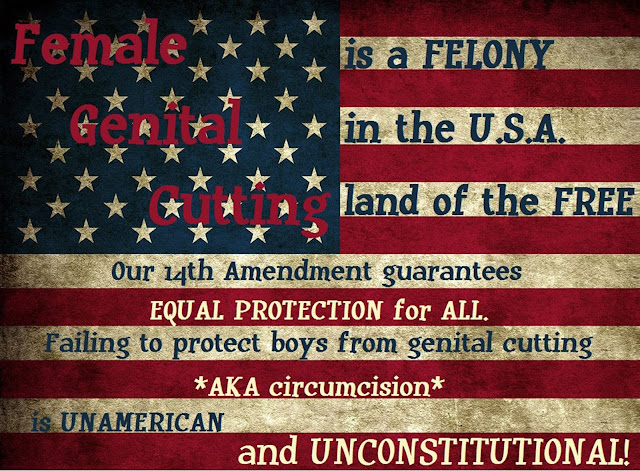 On this 4th of July we celebrate many freedoms protected and held dear in the United States. One such protection, however, has been failed to be recognized in this nation, and that is the equal right of baby boys and intersex persons to maintain their full and functioning genitals at birth. Taking a closer look at the U.S. Constitution and laws currently in place, we see that routine infant male circumcision is already illegal.

The Equal Protection Clause (8.6) of the 14th Amendment of the U.S. Constitution prohibits U.S. States from denying any person within their jurisdiction equal protection of the laws. Section 1 of this clause reads:


The Universal Declaration of Human Rights, adopted in December, 1948, by members of the United Nations declares in Articles 2 and 5:


Everyone is entitled to all the rights and freedoms set forth in this Declaration, without distinction of any kind, such as race, colour, sex, language, religion, political or other opinion, national or social origin, property, birth or other status. Furthermore, no distinction shall be made on the basis of the political, jurisdictional or international status of the country or territory to which a person belongs, whether it be independent, trust, non-self-governing or under any other limitation of sovereignty. No one shall be subjected to torture or to cruel, inhuman, or degrading treatment or punishment.


The Federal Prohibition of Female Genital Mutilation Act of 1995 (which was signed into law in 1996, and went into effect in March 1997, punishable as a felony under federal U.S. law) prohibits ANY genital cutting of any kind - including small pin pricks or nicks - to a minor child or baby under the age of 18, for any reason whatsoever (religious or otherwise) if this minor is deemed to be 'female.' The FGM law, in combination with the 14th Amendment Clause 8.6, makes all forms of forced genital cutting on minors a federal violation, regardless of sex. The Universal Declaration of Human Rights further supports this position.

Therefore, as of March 1997, all forms of medically unnecessary forced circumcision on infants of any sex, are most certainly illegal in the United States of America. 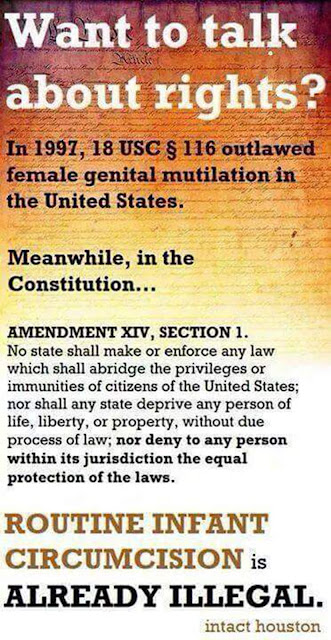 Should I Circumcise? The pros and cons: SavingSons.org/2014/12/should-i-circumcise-pros-and-cons-of.html