Several of those in the pro-circ camp - encouraging the non-consenting genital cutting of infant boys - have recently jumped onto a Web-reported article.

This study (and the way it is being reported) is flawed in 2 major ways:

1) It was conducted via interview in Uganda where people are being saturated with messages (from outside, white, male, U.S. researchers) that circumcision is a great thing and is good for all adults involved. People (especially when questioned by those in positions of authority) regularly report what is favorable and being asked of them -- the "white coat" impact on psychology and interview responses.

2) Even with the above stated influence, 60% of women interviewed STILL reported there was either LESS pleasure after their adult male partner was circumcised, or no change.

Stating, then, that this study "proves male circumcision benefits women" or "proves circumcision increases pleasure for women" is a 100% false statement.

The title of this article itself very misleading (which may not be surprising as it was NOT published in any valid, empirical, peer-reviewed, medical journal, but rather posted and passed around online). In addition, the entire pro-circ premise of those quoting the study is also very much unrepresentative of the actual study and the results found.

Furthermore, even if this study had shown different results -- (rather than 60% of women reporting what we already know to be true - there is LESS pleasure or no change depending on the life cycle stage that a woman is in and how 'tightly' her male partner is cut) -- it was conducted via interview in Uganda, Africa where ADULT men are being given the option of circumcision themselves (and being pressured to do so). It is in no way applicable to non-consenting INFANTS in the United States.

Finally, even if all women had better sex lives as a result of male genital cutting (which they certainly do not - 70 years of valid, reliable, medical research in the fields of human sexuality and healthy psychology have shown the exact opposite to be true)...but IF they did - does that then justify us cutting up baby boy's penises at birth?

If men enjoyed sex more - or obtained more pleasure as a result of women having modified genitals/labia/clitoris/vagina, should we then begin genital cutting on newborn baby girls at birth as well?

The argument based upon such logic is absurd.

Just as each woman has the right to make decisions about her own body (and what happens TO it), men's (and boys' - even BABY boys') bodies belong to them - for each and every one to decide for himself what he will do - with his arms, ears, eyes, nose, legs, feet -- and even his penis.

So, put down the knife: Step away from the baby. 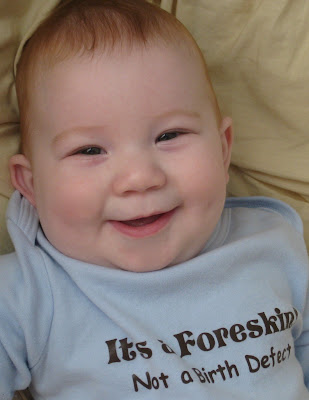