This man cuts his children's genitals with a box cutter, no anesthesia, has damaged their sexuality, and robbed them of a WHOLE LOT more...and he gets 120 days jailtime for "misdemeanor child abuse".

And it all happens the same week that an OH family is charged with the same for their safe, gentle, baby-friendly homebirth... Again, I have to wonder: What is wrong with us!?!

*Note: The accused man is correct about not doing anything that would not be done in the hospital - the vast majority of baby boys undergoing genital cutting (circumcision) in the United States receive NO anesthesia for the amputation. Anesthesia of any kind is counter indicated for newborns as it can be harmful. Last I checked, circumcision is also counter indicated and always harmful as well.

A man accused of circumcising his two sons was found guilty of misdemeanor child abuse on Thursday.

The judge will sentence Johnny Marlowe today. He faces a maximum of 120 days.

Marlowe is currently serving a 12- to 15-year sentence on assault and kidnapping charges, which were filed by one of his two wives.

Prosecutors alleged that between 2005 and 2006, Marlowe used box cutters to circumcise two of his sons, causing severe pain and in one case 11 hours of bleeding.

Marlowe admitted to circumcising the two infants in Caldwell County, and a third son in Mecklenburg County, without using anesthesia for any of the boys.

He contends he didn't put them through any more pain than a medical doctor would have.


Oh, so, so sad.
This is one reason genital mutilation laws (such as the FGM Bill currently in order in the U.S. since 1995) cannot have religious exemption clauses -- no baby should be LEGALLY abused/raped/mutilated at the hand of an adult simply because we grant them religious freedom to do so. We protect girls from such horrors, and boys certainly deserve equal protection. See: MGMBill.org

WSOCTV.COM
A man accused of child abuse for circumcising his own sons defended himself in court on Tuesday, saying the case is not about the children at all.

“This is not about circumcision. It’s about religious freedom,” said Johnny Marlowe in a Caldwell County courtroom.

Marlowe is representing himself. He asked the jury to keep an open mind when they consider his actions. 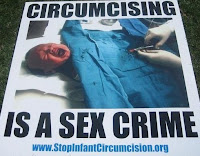 arlowe does not deny that he used a box cutter to circumcise two of his newborn sons in 2005. Prosecutors said that in one of the cases, he strapped his son down and used a hot light bulb to stop the bleeding.

The defendant was convicted in May on charges he abused the two women he referred to as his wives. He broke down in tears in front of the jury as he described his time in jail awaiting that trial, saying his religious beliefs were not respected.

Marlowe said he made a vow to God that he would not eat pork and he had to be rushed to a hospital while weighing just 117 pounds.

Amber Marlowe, who was legally married to the defendant, testified that while 13 children and the two women lived with him, no one could stop him from circumcising the boys. She told Eyewitness News they had to agree with him or be beaten.

Marlowe told a doctor called by the prosecution that you don’t have to be in a hospital to have a sterile environment. Marlowe said his actions should not be considered illegal.

Marlowe’s trial could wrap up on Wednesday.