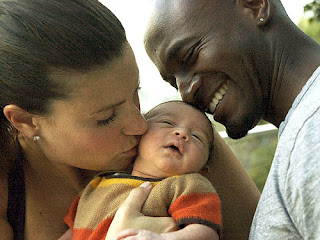 Taye Diggs (38) appeared on The Ellen Show on October 15th and discussed the natural, physiological birth of his first baby, Walker Nathaniel, 6 weeks ago. It sounds like his wife, Idina Menzel (also 38), did her research on birth options prior to selecting a midwife, a doula, and waterbirth location in which to labor on her birthing day. Diggs recently told a crowd at a Beverly Hills National Cancer Society event, "I have a new found respect and admiration that borders on worship of my wife." Aren't these the words that EVERY new mom needs to hear from her partner?! :)

Diggs currently plays a doctor (who has attended television births) on the show, Private Practice (a show with episodes often funded by various pharmaceutical and special-interest groups who are not especially AP/mother/baby-friendly). However, Diggs admits that acting as a doctor on the show has taught him nothing about attending real-life birth.

The following day (Oct 16) Diggs appeared on Jimmy Kimmel and got into a discussion about doulas (begins at minute 3:40), cord clamping, and placenta encapsulation (which, again, his wife researched and decided upon). Unfortunately, neither Diggs nor Kimmel seem to know much about doulas or placenta encapsulation...but at least the word was spread a bit on national television thanks to Menzel's birth. Now, I wonder if they decided to continue on in peacefully parenting their little one by keeping him intact...