I swam with (wild) dolphins in the warm waters South of Cabo when I was pregnant and I certainly found it to be true that these creatures gravitated to me more than the other non-pregnant friends I was with. The dolphins seemed to be able to sense my child growing within. There are few things I have enjoyed more than swimming amidst these wise, peaceful creatures, and I can't say I haven't thought a time or two about an ocean birth myself... ;)

Currently, the Dolphin Attended Water and Natural Birth Center is underway in Hawaii. It sounds interesting, and yet the way that dolphins are treated (and captured/kept in captivity) around the world is rather alarming when you look into it. The recent film, The Cove, takes a brutally honest look into the 'swim with dolphin' programs, as well as the sale of mercury-filled dolphin meat around the world. I have to wonder if these 'birth with dolphin' ideas are along those same lines? 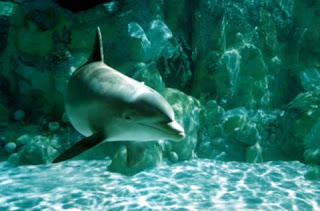 So, what do you all think?

Does anyone have more info on this particular video?


Debbie King wrote about another birth with dolphins:

Sarah Evans reached out, gently stroking the dolphin's side. Her labour pangs subsided as she breathed deeply, relaxing in the warm waters of the Red Sea.

Despite opposition from the Israeli authorities, Sarah had decided to go ahead and give birth with the dolphins to 'help' her. And although she had reservations about the lack of hospital facilities available if anything went wrong, within three hours she was holding a healthy baby son.

Sarah had flown out to the Israeli resort of Eilat specifically to give birth with dolphins in the Red Sea. She was one of six pregnant women and a team of doctors, therapists and masseurs who flew to Eilat after months of preparation by London obstetrician Dr. Gowri Motha. The idea was for the dolphins to act as aquatic 'midwives', helping the women to have a tranquil labour.

But the Israeli authorities were not impressed by the idea of the controversial births. Concerned for the safety of the women and their babies, they banned the scheme after health inspectors ruled it could expose mothers and babies to infections. But Sarah was absolutely determined to go ahead, and ignored the ruling. In the end, she was the only one in the group to experience giving birth in the Red Sea.

When she went into labour at midnight, 31-year old Sarah trekked from her hotel room to the beach and the Dolphin Reef sanctuary, where she gave birth to baby Samuel in a heated, glass-bottomed pool. As she hoped, the Reef's six dolphins - Hindu, Cindy, Shi, Dicky Dana and Domino - came to investigate. Sarah, who used Dr Motha's technique of self-hypnosis during her three-hour labour, was able to touch one of them as it circled around her. Husband Jonathan, a 30-year old recruitment agency owner, was there to cut the umbilical cord as Samuel came into world at 3am.

Dr. Motha, 43, has spent 20 years researching childbirth, and believes that dolphins can help a woman deliver with almost no pain by passing an underwater sonar messages of support. And Sarah agrees: "Giving birth in the Red Sea with the dolphins was the most wonderful experience of my life," she says. "I was in complete control of the situation and didn't feel under any pressure to perform, as you do in a hospital with the doctors and nurses milling about.

"It happened so quickly, and I wasn't in any pain. The dolphins came close - but not too close. It felt like they wanted their presence to be known, but didn't want to be too intrusive," she says. Just 30 minutes after the birth, Sarah walked up the sandy beach with her new-born son, and by 4 am she was celebrating with champagne back at the hotel. Sarah, who also has a three-year old son Joshua, says she has no regrets about her unusual labour, even though it meant sneaking out in the night to avoid the authorities.

Now back at home in East Sussex, she says she and baby Samuel are fighting fit. "My only reservation was that while I was in labour I didn't have the option of hospital facilities if I needed them," she says.

Dolphins are said to be able to sense if a woman is pregnant - before she may know herself in some cases - and if there are any pregnant women in the water, they often pay them particular attention.

The other five women who went to Eilat say swimming with the dolphins in the weeks leading up to giving birth was an experience they'll never forget. And Sarah describes how, when she was out swimming in the sea in the weeks before the birth, she'd feel Samuel kicking whenever the dolphins came near and she could touch them.

Dr. Motha, who's committed to encouraging women to opt for natural births and self-hypnosis techniques during labour, hailed the project as a great success. "The fact that one woman gave birth in the sea with dolphins made the trip worthwhile," she said.

"Women feel safe when they're in the water with dolphins. These wonderful mammals understand joy at a very deep level. Swimming with them enables a prospective mother to be in touch with joy, which is the true essence to birth. Hospitals tend to turn the birth of a child into an organized, sanitized affaire over which the professionals, rather than mothers have control."