By Danelle Frisbie © 2009
Do not copy/paste articles or photos without author's express written permission. Contact authors by writing to DrMomma.org@gmail.com

I was going to post another picture of the infamous "RestFull" as that is what this post is partially about, but why give Enfamil anymore photo ops than they deserve?
Instead, here is a bottle (Born Free's Vented Glass Bottle) full of Human Milk donated for a Human Baby.


I recently posted a brief blurb on Enfamil's new "RestFull" formula ~ designed and marketed to "keep babies full" and "help them sleep longer." The vast majority of responses I have received have been from other concerned parents and those dumbstruck at this marketing tactic - not to mention slightly afraid at what we are going to see uninformed parents do with this 'thick' formula that 'expands' in babies' bellies.

I have also received a couple (2 to be exact) responses from people who state there is no possible way that a link can exist between formula, sleep/night-waking, and SIDS, and that such statements are outlandish. However, ample amounts of research conducted the world-over, for several decades now, show time and again that not only is there a link between these factors, there is also strong causality that exists. And so, I will re-hash a couple items here and provide sources for those wishing to dig a little deeper into the data we have.

Babies who wake more frequently, and sleep lightly (i.e. are easily woken - or what some people call 'bad sleepers') are at a significantly lower risk for SIDS.

This is one reason that a formula which artificially 'fills' the stomach with chemicals and grains and goop, designed to expand internally and trick a baby's brain into thinking s/he is full, induces deeper/longer sleep, and in turn, may lead to an observable increase in SIDS cases.

In addition, the brain is on full throttle of development during the night-time hours. It is during the night that stress hormones such as cortisol decrease (unless a baby is left to cry or feels abandoned/alone) and growth hormones increase. This continues throughout adult life as well, which is the reason muscle is built and repairs faster during night time hours. However, in baby-hood, these hormones dramatically impact baby's brain development and organ growth. Because of this, babies are designed to wake easily to get necessary, frequent, high-quality nutrients all night long (via mother's milk). It literally feeds their brain. Stuff a baby up with 'empty' calories -- or a formula concoction that is designed to keep a baby full but not provide frequent, rich, quality, all-night nutrients, and you impact brain development and organ growth.

Lower neuro firing and neuro connections (which occur when a baby lacks essential nutrients during night time hours) puts babies into more of a comatose type state of mind. Some might interpret this as an 'easy baby' - one who is a 'good sleeper' - however, once again, we see an increase in SIDS as a result of the decrease in neurological activity.

Related to brain activity, sleep, and wakefulness are the components of breastmilk vs. formula. This involves glycobiology, which is a topic large enough for a site all its own. Essentially, glyconutrients are the components of the body's cells which are responsible for effective communication, healing, repair and re-building between and within all cells. Without them, cells break down, organs do not form just right, the brain (and lungs and heart and kidneys and stomach...) do not function at their normal capacity. Regulatory functions (such as respiratory and cardiovascular systems) get off kilter when glyconutrients are not present in necessary number - leading in turn to an excess of SIDS.

Breastmilk, however, is PACKED FULL of glyconutrients -- it literally is liquid gold. Nature has the perfect plan for the protection of tiny growing babies. Healing and health components are provided in an incredible high quantity with every ounce of breastmilk that is consumed. While there are multi-millions of dollars to be made if a pharmaceutical company can replicate glyconutrients artificially (they also enable the body to heal cancer cells) so far no one has been able to do so. Formula is entirely void of any glyconutrients.

All of these SIDS causes are especially true for babies born premature, or those who were induced to birth or electively c-sectioned, rather than triggering labor in their own time (when lungs are fully 'done' and baby's hormones interact with mothers to kick birth into gear). Babies who trigger labor on their own, experience the protective hormones that flood an infant's brain during labor/birth and these in turn increase baby's suckling response and his attachment/awareness through natural oxytocin release ~ another protective feature against SIDS. Unfortunately, artificial induction, elective c-section, and premature birth (along with formula feeding) is ubiquitous across the United States today. These are major components in the reasons we have the highest rates of infant morbidity and mortality in the entire developed Western world.

Many reliable studies show that formula fed babies have double to triple the risk of SIDS due to the above mentioned factors. Formula was designed to be a mere survival tool for babies who absolutely could not get the human milk they need from any other source. Formula may keep babies alive more often, and for longer durations, than feeding straight non-human animal milk (although this is also debated because of the artificial ingredients in formula). However, any form of artificial feeding is severely lacking in what babies need to grow normally and maintain their baseline health. The new "RestFull" formula only promises to intensify all of these factors, and in turn, lead to a higher rate of SIDS.


Moral of the story:

*Rock (in a rocking chair) and wear your baby (in a wrap/sling) to decrease cortisol and other stress hormones, increase oxytocin and other 'love' hormones, regulate respiration and cardiovascular systems, increase neuro activity and brain development, and decrease SIDS.

*Share-sleep (have baby sleep within an arm's reach of his/her non-smoking mother). If you are unable to breastfeed, make every attempt to access human donor milk for your baby. If you absolutely must artificially feed, have baby within an arm's reach of his/her non-smoking mother to sleep and wake to feed baby throughout the night, but do not bedshare unless you are breastfeeding. Nursing mothers and their babies are in tune with each others' bodies and natural sleep/wake cycles in a manner that non-nursing babies/mothers are physiologically not. This impacts the safety of bedsharing for non-nursing mother/baby couples. [Note: Bedsharing and sleep sharing - i.e. cosleeping/sleeping within an arm's reach of baby - are not the same thing. Sleep sharing is always beneficial for baby (no matter his source of nourishment) unless a parent smokes.]

*Keep a fan on (but not directed at baby) in your sleeping room. There is new research that shows this soothing background noise decreases SIDS risk. It helps baby stay calm during night time hours - decreasing cortisol and other stress hormones. Baby (and you!) are less likely to startle (flight and flight response to stress) when small noises occur in the night - a fan helps to drown them out.

*Do NOT practice any form of 'sleep training,' crying-it-out, or 'controlled crying.' All of these things dramatically increase stress hormones and permanently alter an infant's brain - once again, significantly increasing SIDS risk.

Babies simply require night-time parenting for their normal health, wellbeing, and development. This consists of parents losing out on full nights worth of sleep. Sometimes for many months (or years!) on end. It is a part of being the caring, in-tune, gentle parent of a rapidly growing infant. If these things do not sound appealing to you...don't have a baby.


To begin a further investigation on the relationship between SIDS, formula, sleep, and night-waking see:

Infant Sleep: A Review of Research 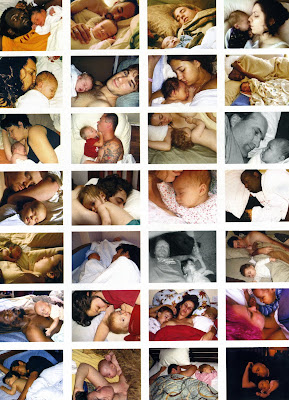 parents sharing sleep with their little ones
published in Mothering, Issue 152