A Chinese policewoman is being hailed as a hero after taking it upon herself to breast-feed several infants who were separated from their mothers or orphaned by China's devastating earthquake. Officer Jiang Xiaojuan, 29, the mother of a 6-month-old boy, responded to the call of duty and the instincts of motherhood when the magnitude 7.9 quake struck on May 12. "I am breast-feeding, so I can feed babies. I didn't think of it much," she said. "It is a mother's reaction, and a basic duty as a police officer to help."

The death toll in the earthquake jumped Thursday to more than 51,000, and more than 29,000 are missing, according to government figures. Thousands of children have been orphaned; many others have mothers who simply can't feed them."

At one point, Jiang was feeding nine babies. "Some of the moms were injured, their fathers were dead. Five of them were orphans. They've gone away to an orphanage now," she said.

She still feeds two babies, including Zhao Lyuyang, son of a woman who survived the quake but whose breast milk stopped flowing because of the traumatic conditions. "We walked out of the mountains for a long time. I hadn't eaten in days when I got here and my milk was not enough," said that mother, Zhao Zong Jun. "She saved my baby. I thank her so much, I can't express how I feel."

Liu Rong, another mother whose breast milk stopped in the trauma, was awed by Jiang's kindness. "I am so touched because she has her own baby, but she fed the disaster babies first," Liu said. "If she hadn't fed my son he wouldn't have had enough to eat."

Jiang has became a celebrity, followed by local media and proclaimed on a newspaper front page as "China's Mother No. 1." She's embarrassed by the fuss. "I think what I did was normal," she said. "In a quake zone, many people do things for others. This was a small thing, not worth mentioning."

There has been a huge outpouring of support from families who want to adopt babies orphaned by the quake. But that process takes time and there are mouths to feed.

Jiang misses her own son, who's being cared for through the emergency by in-laws in another town, but she is aware of the new connections she's made. "I feel about these kids I fed just like my own. I have a special feeling for them. They are babies in a disaster."

This is interesting because we have long known that naturally occuring omega-3 fatty acids are essential for optimal brain and tissue development, circulatory function, and heart health, as well as a host of other things. They are prominent in human breastmilk, giving babies a normal (healthy) start in life. However, in their additive form - or synthetically derived - they do not act within the body in the same manner.

A common ingredient in infant formula was found to be linked to diarrhea, severe dehydration and seizures in babies, according to complaints submitted to the FDA.

A shocking report has been released on the adverse health effects of fatty acid supplements found in infant formulas. The Cornucopia Institute, a US-based corporate watchdog group, presented their findings on the fatty acids DHA and ARA, which are now commonly added to formula.

The report is based on a Freedom of Information Act request that the Cornucopia Institute filed with the Food and Drug Administration (FDA), the result of which was the uncovering of 98 reports filed by parents and physicians detailing incidences when babies had reacted adversely to formula containing DHA/ARA. The reported incidences range from cases of vomiting and diarrhea that stopped when babies switched to non-DHA/ARA formula to babies being treated in intensive care units for severe dehydration and seizures.

The FDA has never been convinced of the safety of DHA/ARA additives, according to the report. In its initial analysis of the additives, the FDA stated it had reached no determination on their safety status. The administration also noted that some studies had reported unexpected deaths among infants who had been fed with DHA/ARA formula. Despite its reservations, inexplicably the FDA did not withhold approval for the additives.

INFACT Canada has long questioned the use of DHA and ARA (also marketed as omega-3 and omega-6 fatty acids) in infant formula. All major formula companies have added the fatty acids to their products in recent years, claiming that they aid in brain and eye development. However, most test results have found the additives have negligible effects on infant development. But because DHA and ARA are found in their natural form within breastmilk, formula companies market DHA/ARA additive formula as "closer to breastmilk."

Martek Biosciences Corporation, the company that supplies almost all formula companies with DHA/ARA, has admitted that the purpose of the additives is not to encourage healthy development, but to be used as a marketing tool. In its promotional material to encourage investment, Martek stated:

"Infant formula is currently a commodity market, with all products being almost identical and marketers competing intensely to differentiate their product. Even if [DHA/ARA] has no benefit, we think it would be widely incorporated into formulas, as a marketing tool and to allow companies to promote their formula as 'closer to human milk.'"

While DHA and ARA are found naturally in breast milk, the idea that Martek's manufactured acids make formula closer to breast milk is ridiculous. Martek produces DHA and ARA from fermented algae and fungus, and uses hexane (a neurotoxin) in the manufacturing process. Simply adding these synthetic substances to formula cannot make artificial baby milk behave like breast milk, which is a complex, living substance that provides babies with the best possible nutrition and immunological protection and development.

Regular infant formula puts babies' health at risk, but now infants are being harmed for the sake of a marketing tool. This is an egregious case of formula companies putting profit margins above infant health. In light of this report, it is imperative that all parents be made aware of the potential risks of feeding their babies formula with DHA/ARA. The products should be pulled from the market until their safety can be properly assessed by independent investigations.

Babies should not have to get sick just because companies want to raise their sales figures.

For the full report, see: http://cornucopia.org/DHA/DHA_FullReport.pdf

Why Does The Baby Cry?

All the 21st century technological safety mechanisms in the world aren't baby's natural habitat... that alone is skin to skin on Momma's chest. Sharing her breath. Taking in her scent. Soothed by her heartbeat. Eating her nourishment. It truly is a perfect design. 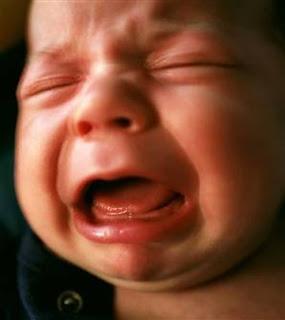 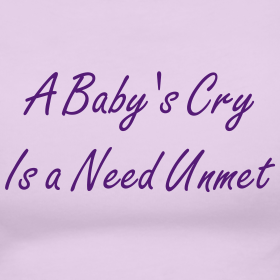 shirts available here
Elsa Haas won the opportunity to perform the show "Wearing My Baby: A Stone Age Mommy on Staten Island" and a $1000 grant for this poem and others that she submitted to a local literary competition. The baby- and child-friendly show will be held at the St. George Theater on Staten Island on June 14. For information, you can email Elsa at ElsaHaas@si.rr.com.

Orgasmic Birth brings to the screen the ultimate challenge to our cultural myths by inviting viewers to see first-hand the glorious emotional, spiritual, and physical heights attainable through birth.

Most at home...
All gentle births...
Everything US obstetrics likes to say mother's "can't" do...mothers do just fine every day!

(Heather - one of the homebirthing VBAC-twins women pictured has her blog here: http://itstwinsanity.blogspot.com/)