By Brian Brown © 2016
Read more from Brown at Intact Connecticut, and find him along the SOS Odyssey 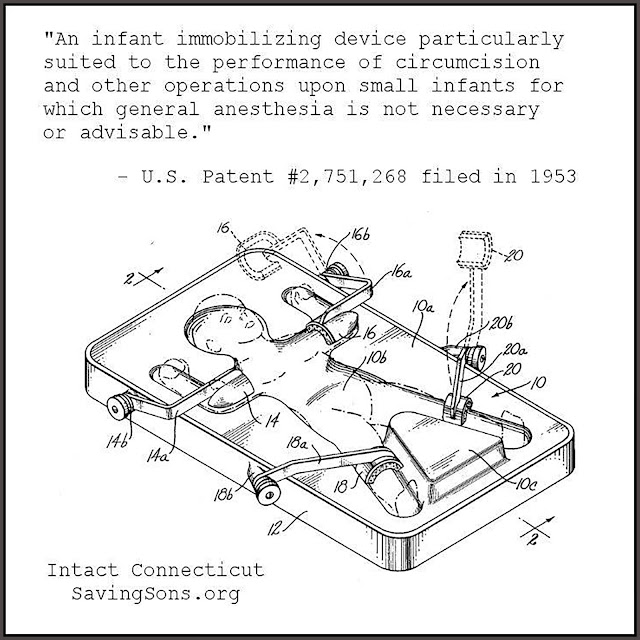 Is the Olympic Circumstraint a medieval torture device or piece of modern medical equipment? It is difficult to tell, but one thing is for certain: the grave horrors this board has witnessed pale most other traumas that are needlessly inflicted upon the bodies of newborn babies in North America.

Pictured above is the original blueprint of the circumstraint - a retraining board used most often for forced genital cutting of infants. Although the design has changed since its inception in 1953, the intent has not - it is an effective way to immobilize a small infant.

The patents reads (in part):

An infant immobilizing device particularly suited to the performance of circumcision and other operations upon small infants for which general anesthesia is not necessary or advisable.

[The size is ideal.] This is true since operations of this type are usually performed in the first two weeks of life but not until the infants weight has increased to about seven pounds. It is found, therefore, that a retaining depression 10b cupped approximately to fit an average eight-pound infant will do well for the majority of cases.

While fairly close conformity of the depression walls to the body contour is desirable to minimize freedom of movement of the child, nevertheless a small amount of clearance from the infants body along the depression walls is not objectionable in that regard and is actually preferred to an excessively tight fit creating discomfiture for lack of air circulation around the skin. The walls of the depression should extend well up around the sides of the body members to furnish lateral restraint against physical movement, but should otherwise leave the body exposed as much as possible for access by the surgeon.

Interestingly, the patent makes no mention of the sex of the child that this device is appropriate for. In post-war America, it was perfectly legal to immobilize any infant for the purpose of cutting their genitals – male, female, or intersex. Females finally gained legal protection in 1997 from this medieval practice in the United States. Isn’t it time we extend the basic right of genital autonomy to all? 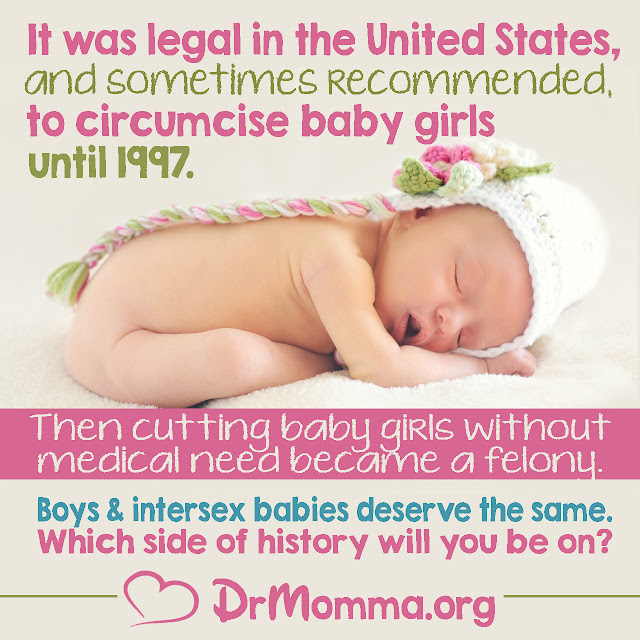 An anonymous nurse describes the horror of genital cutting upon the circumstraint: SavingSons.org/2012/06/if-this-stained-circumstraint-could.html