As reported by the Catalyst Consortium 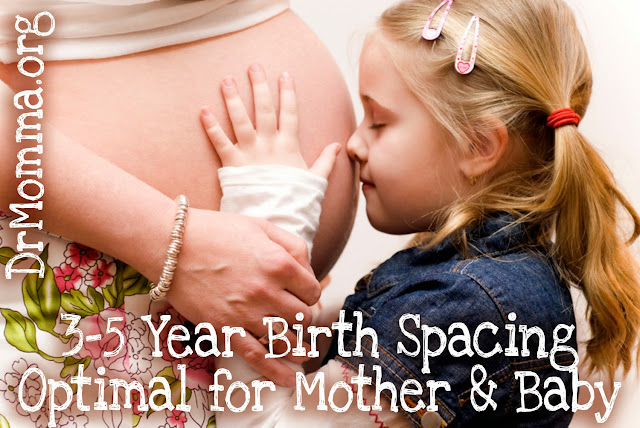 For many years, family planning experts generally agreed that at least a twenty-four month, or two-year, birth interval is important for infant, child and maternal health. Studies have shown that birth intervals less than two years are associated with adverse perinatal and maternal outcomes. Despite this knowledge, few governments, or international health organizations have birth spacing policies or programs.

Research on optimal birth spacing collected and commissioned by CATALYST has confirmed the long-held notion that the highest risks for adverse health outcomes for children and mothers often occur with the shortest birth intervals. In addition, the new research shows that there is substantially more health benefit gained from lengthening the birth interval beyond the previously recommended two years to a three to five year birth interval. The new research shows there is an optimal interval for birth spacing - a period associated with the lowest risks for adverse health outcomes - and that optimal interval is three to five years. Based on these groundbreaking new research findings, CATALYST and the Optimal Birth Spacing Champions has taken the position that the previous two year guidelines need to be revised to be: Three to Five Years for Optimal Birth Spacing.

The new research on optimal birth spacing comes from large retrospective cross sectional analyses that statistically controlled for potentially confounding socio-demographic and biological variables. Shea Rutstein examined the association between birth intervals and neonatal, infant and child health and nutritional outcomes using Demographic and Health Survey (DHS) data from fifteen developing countries in Africa, Latin America and Asia. Agustin Conde-Agudelo examined the association between birth intervals and perinatal, maternal, and adolescent health outcomes, using a database of over two million pregnancies in eighteen countries in Latin America and the Caribbean. Bao Ping Zhu examined the association between birth intervals and perinatal health in two U.S. States and between two racial groups. Their findings indicate that spacing births for three to five years has the greatest positive health impact on perinatal, neonatal, infant, child, maternal, and adolescent maternal health in both developing and developed countries. The findings ( Graphs: One and Two ) indicate that the lowest risks for fetal death, pre-term delivery, small for gestational age, neonatal death, and low birth weight occur when births are spaced from three to five years. The lowest risk for maternal morbidity and mortality also occur at three to five year birth intervals.

CATALYST has crafted the graph Optimal Birth Spacing Interval: Maternal- Perinatal Risks to illustrate the recommended optimal birth spacing interval. Research findings on the association of birth intervals and maternal and perinatal health were plotted on an eighty- month timeline. As Figure 1 shows:


For the mother-child dyad, the data supporting an optimal birth interval window spans from 27 to 69 months. However, as a public health recommendation, it is safer to create a buffer of nine months at each end of the interval window (27 + 9 = 36 and 69 - 9 = 60). Based on these findings CATALYST, the OBSI Champions and USAID have recommended a 36-60 month or a 3-5 year window as the optimal birth spacing interval. 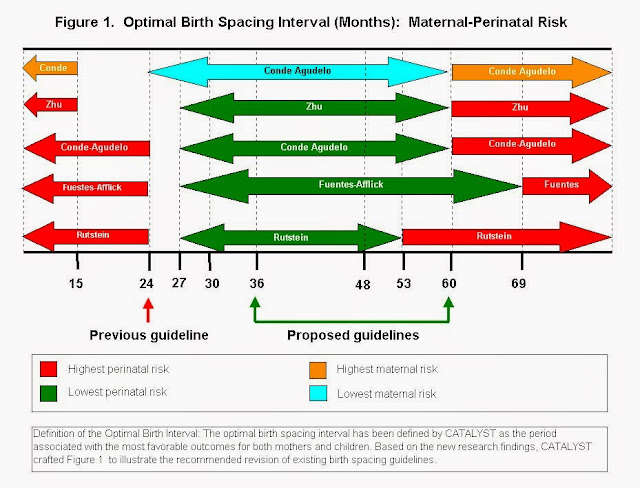 New Findings on the Determinants of Birth Spacing Behaviors

In order to better understand the larger social, cultural, religious, institutional and structural influences on birth spacing behaviors, CATALYST has gathered qualitative data through focus group discussions in four countries: Peru, Bolivia, India and Pakistan. Over 1,000 respondents participated in the focus groups. In 2003, CATALYST will conduct OBSI focus groups in Egypt. Results from the series will help CATALYST form a more comprehensive research base for new birth spacing programming.

CATALYST has commissioned several studies by Dr. Agustin Conde-Agudelo, Consultant to the World Health Organization, and the Pan American Health Organization. These are presented in Optimal Birth Spacing: New Research from Latin America on the Association of Birth Intervals and Perinatal, Maternal and Adolescent Health (2002). The document is available in English and Spanish.

Other useful reports on optimal birth spacing include:

The following list provides a short bibliography of some of the recent studies in optimal birth spacing interval:

Conde-Agudelo, A. Analysis of the Association Between Maternal Age and Adverse Pregnancy Outcomes. Unpublished.

Conde-Agudelo, A. Analysis of the Maternal-Perinatal Morbidity and Mortality Associated with Inter-Pregnancy Intervals Following a Miscarriage in Women and Adolescents. Unpublished.

Jansen, W.H. D. Frick, and R. Mason. The "X" factor in birth spacers: age and parity in demand for birth-spacing in 15 developing countries. Paper Presented at the Population Association of America. May, 2002.

Skjaerven, R. et al. The interval between pregnancies and the risk of preeclampsia. New England Journal of Medicine 346 (1): 33-38.

Zhu, B.P. et al. Effect of interval between pregnancies on perinatal outcomes among white and black women. American Journal of Obstetrics and Gynecology (185): 1403-10.

Zhu, B.P. et al. Effect of the interval between pregnancies on perinatal outcomes. The New England Journal of Medicine (340): 589-94. 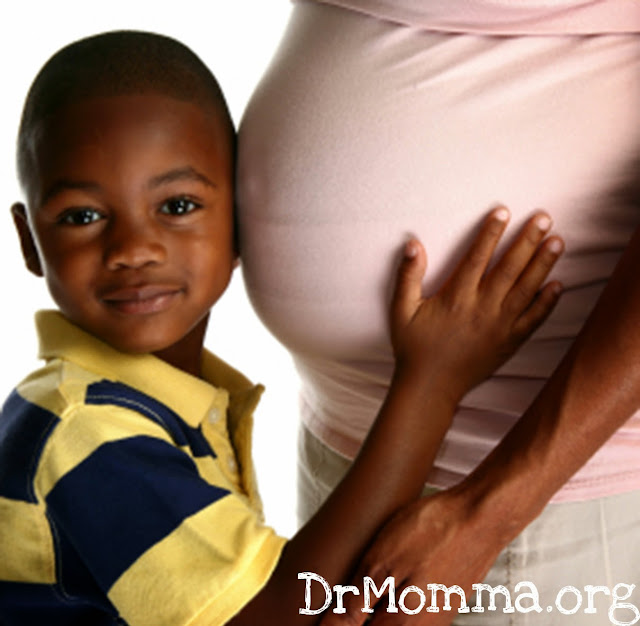 Your Children's Future Successes May Depend on Birth Spacing

Why I Waited 3 Years Between Pregnancies (Natural Mama)

Birth Order and Intelligence [A 3 year minimum between pregnancies]

Making the Case for Space: A Birth Spacing Opinion

Deep Nutrition: Why Your Genes Need Traditional Food (information included on spacing of pregnancies and how the nutrient stores impact health of a baby already born and a new baby on the way)

By Hakan Svensson
Read more from Svensson at CarSeat.se

Children who sit rear facing in a car seat cut the risk for death or injury dramatically. But why is rear facing so much better and where did the idea come from?

There are three main reasons why rear facing is so much better. First is the outstanding protection of a child’s head, neck and spine in frontal collision - which accounts for roughly 80% of accidents. Second is superior protection in side collisions. A rear facing child is pushed further into the car seat where it’s well protected. Third is a social reason, rear facing car seats often work better because driver/passenger can more easily communicate with the child.

You will notice Sweden mentioned often regarding car seat safety, especially when discussing rear facing use. The Swedes started rear facing long before other countries and have led research in the area for the past 40+ years. Swedish car seats are also different, with virtually all seats allowing children to sit rear facing up to 25 kg. (55 lbs), one of the highest rear facing limits in the world. Rear facing past 12 months is yet unheard of for many parents in other nations, while many are just now learning of the huge safety benefits. And all the while, rear facing car seats are a Swedish invention, with children here having used them standardly since the 1960s.

It was a Swedish professor, the now legendary Bertil Aldman, who came up with the idea of rear facing car seats in the early 1960s. Professor Aldman took his inspiration from the seats the Gemini mission astronauts used for take-off and landing, specially moulded to distribute the forces over the whole back. He was watching a TV program with the astronauts in the Gemini space capsule and noticed they were laying on their back, in opposite direction of acceleration. No one back then imagined how revolutionary Aldman’s research would become. He is now well known internationally and is credited with saving thousands of children’s lives. Read more here about Aldman and his 'crazy idea' of how to keep children ultra-safe in cars.

Many ask about rear facing and the benefits -- is it really that much safer? Are the benefits real? Are lives actually saved? From 1992 through June 1997, only 9 children properly restrained rear-facing died in motor vehicle crashes in Sweden, and all of these involved catastrophic crashes with severe intrusion and few other survivors. Looking at statistics in Sweden, where the recommendation is for children to sit rear facing until age 4, it is obvious to see what a huge difference the simple concept of rear facing really make.

Professor Aldman is legendary for his research, but it is Thomas Turbell who is called the 'Father of rear facing' for his work at the highly regarded crash test facility VTI in Sweden.  There are over a million rear-facing seats in use in Sweden, and we do not know of any cases where a child in a rear-facing car seat has been seriously injured in a frontal collision. Swedish accident research has shown that rearward facing children’s car seats reduce serious injuries by 92%, while the forward-facing seats only reduce injury by 60%.

In the last few years, the rest of Europe (and rest of the world) has also become aware of this. A number of cases are known in which children have been totally paralyzed as a result of neck injuries while using forward-facing seats. The idea of rear facing is very simple: children, not only babies, have weak neck and bone muscles which are well protected while rear facing. Volvo explained this very well in one sentence: In the event of a front-end collision, the whole of the child’s back takes the strain of the impact, not its much more vulnerable neck.

To learn more about rear facing, first take a look at the history behind it and how the Swedes have been been rear facing children for the past 40+ years with amazing results. Read more details about the safety benefits and why Extended Rear Facing (rear facing past 24 months) or ERF is superior compared to forward facing. Learn about safety of different positions in the vehicle and also if Isofix/LATCH really make a difference.

Car Seats Are For CARS: http://www.mothering.com/green-living/car-seats-are-for-cars

Do You Use Your Car Seat Correctly? http://www.drmomma.org/2010/02/do-you-use-your-carseat-correctly.html