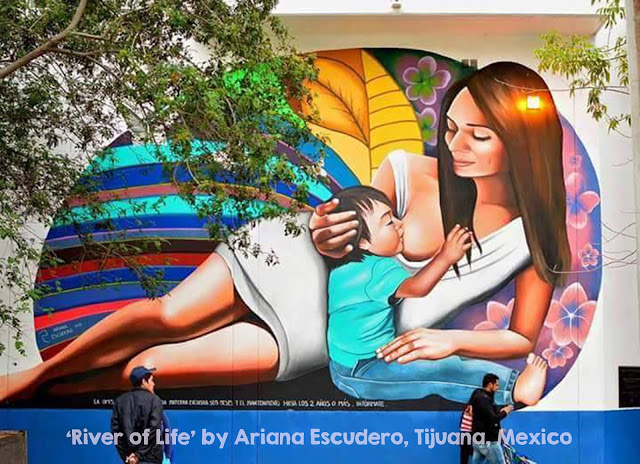 A beautiful mural celebrating the joys and goodness of natural weaning is depicted on Tijuana’s largest public health care facility.  The message, painted by Ariana Escudero, is that there is no shame in breastfeeding your baby (of any age). "2 years or more" reads a part of the caption underneath this nursing mom and her little one.

Escudero painted the 45-by-15 foot mural at Hospital General de Tijuana in Zona Río, in part because of the social insults she experienced while breastfeeding her two babies.

"It seemed so important to me to bring this message in this way because many mothers will come [to the hospital], but they’ll come to doctors -- many of whom are surprisingly misinformed about breastfeeding -- just like the general public," says Escudero. This particular hospital is where approximately 90% of local mothers birth their babies, so the mural (at the hospital's main entrance) is seen by most. She continues, "Mothers who decide to breastfeed our children do not have any reason to be censored. That’s why we must normalize it to create a culture of breastfeeding, and fight for women’s right to choose [to nurse their babies]."

Myths and misconception about the normal feeding of human babies is widespread in Mexico. Many mothers say that nursing in public is even more taboo in Mexico than in the United States, and as a result most new mothers are opting for artificial baby feeds, despite the fact that this costs significantly more than breastfeeding (both in immediate formula cost and resulting health care costs for babies who become ill more often without human milk).

One local Tijuana mother, Athena Valencia, writes on Facebook, "This past Friday on a bus in Tijuana a gentleman sat next to me and my baby. From the beginning he looked kind of grumpy... My baby she fidgeted, and the only way to calm her down was to nurse her. He turned around and said, 'That's disgusting!' I felt like crying. This is one of the reasons I don't like breastfeeding in public. But at home, everything works well for me and my baby."

Another mother writes, "[This mural] is so beautiful. I've spent days with my heart broken to pieces just a few steps away from her, but always look back and think how beautiful it is for my baby to live healthy, without pain of disease, and being a mother so many things are represented in this painting."

Due to this social pressure, Mexico has one of the lowest rates of breastfed babies in any Latin American nation - at approximately 14% for babies 0-6 months. 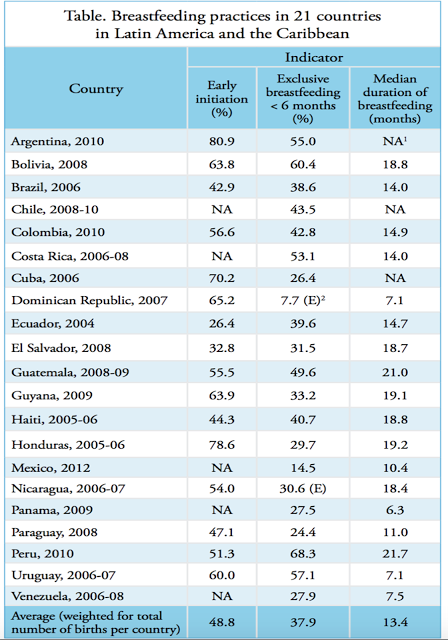 The mural project cost $9,000 in total, half of which was funded by the city, and the other half fundraised. Crianza Alternativa wrote on behalf of this (2014) fundraising effort, "Mexico, a developing country, is particularly vulnerable on the subject of breastfeeding due to high levels of poverty and lack of education on the matter. We have become so unattached with our motherly instincts that we have doubted ourselves on simple things like, 'We can provide full nourishment for our children. We CAN breastfeed.'"

Escudero finished her fantastic work of art during July and August, 2015, and this year all mothers birthing at the hospital will be met with an empowering image as they bring their new babies into the world. 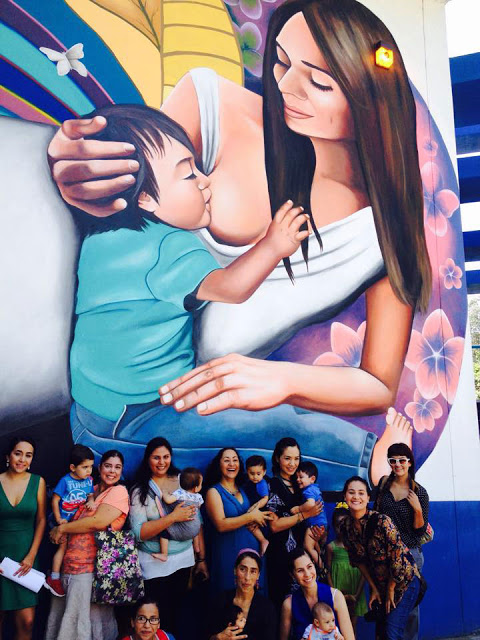 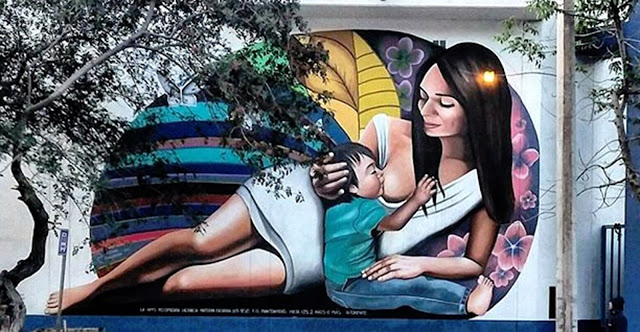 Excellent breastfeeding books for nursing mothers (read one before your little one arrives):
http://astore.amazon.com/peacefparent-20?_encoding=UTF8&node=1