Nursing School: OB Clinicals and My Experience With Infant Circumcision 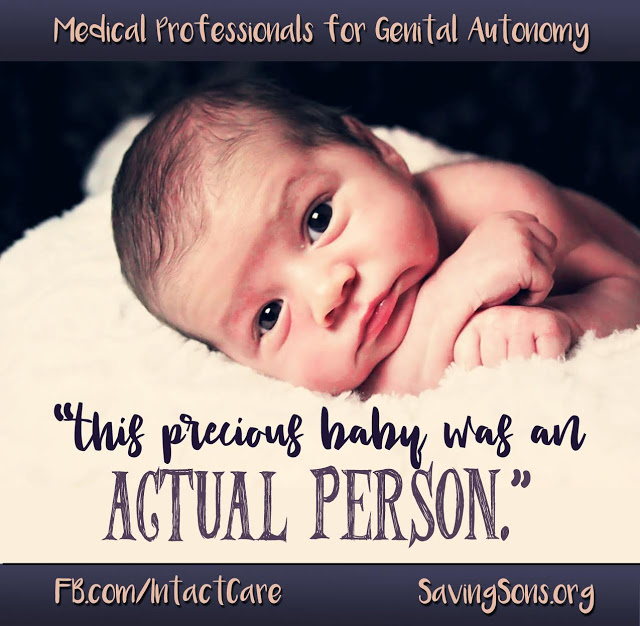 During my second to last semester of nursing school, I went through my OB clinical (which included antepartum, labor and delivery, postpartum, NICU, and OB triage units, as well as lactation consulting) at one of our local hospitals. One morning, before we headed to our assigned unit for the day, my clinical instructor enthusiastically told my group, "If you get the chance to see a circumcision, definitely do it. It's cool!"

I didn't think much of her words at the time. Of course, as nursing students we wanted to see and experience as much as possible. I had unexpectedly found myself enjoying my OB clinical and was so excited and eager to learn as much as I possibly could.

While in the mother/baby (postpartum) unit, the nurse that I was working with that day told me that we'd be assisting with a circumcision. I had never seen one before, so I took the opportunity, not knowing what to expect.

After we had taken the newborn back to the "circ room" in the nursery, I watched the nurse gather the necessary supplies, place him on a plastic board [a circumstraint], and secure his arms and legs with Velcro straps. He started crying as his tiny and delicate body was positioned onto the board, and I instantly felt uncomfortable and disturbed seeing this helpless newborn with his limbs extended in such an unnatural position, against his will. My instincts wanted to unstrap him, pick him up, and comfort and protect him. I felt an intense sensation of apprehension and dread about what would be done to him.

When the doctor entered the room, my body froze, my stomach dropped, and my chest tightened.

This precious baby was an actual person. He was a 2-day-old boy named Landon, but the doctor barely acknowledged him before administering an injection of lidocaine into his penis.

Instantly, Landon began to let out a horrifying cry. It was a sound that is not normally ever heard in nature because this trauma is so far outside of the normal range of experiences and expectations for a newborn.

The doctor, perhaps sensing how horrified I was, tried to assure me that the baby was crying because he didn't like being strapped onto the board. He began the circumcision procedure right away, barely giving the anesthetic any time to take effect.

Landon's cries became even more intense, something I hadn't imagined was possible. It seemed as if his lungs were unable to keep up with his screams, and desperate attempts to maintain his respirations.

Seeing how nonchalant everyone in the room was about Landon's obvious distress was one of the most chilling and harrowing things I had ever witnessed. I honestly don't remember the actual procedure, even though the doctor was explaining it to me. I can't recall a word he said during or after because I wasn't able to focus on anything but Landon's screams and why no one seemed to care. I only remember that the nurse attempted to give him a pacifier with glucose/fructose at some point. 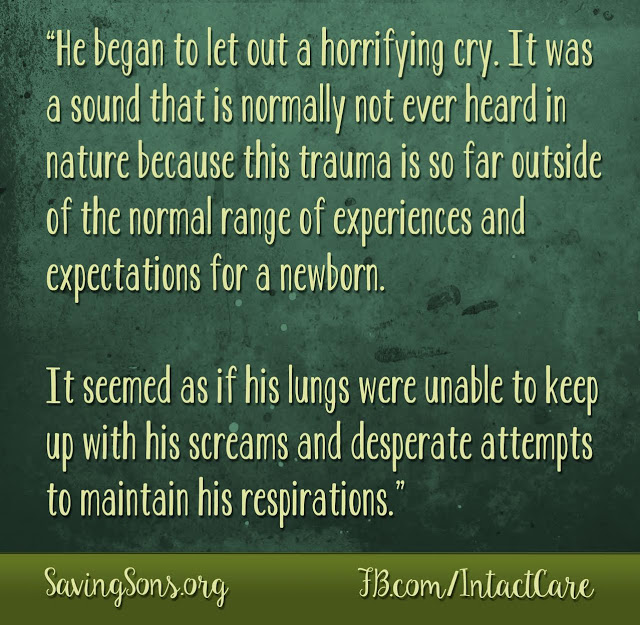 Landon was "sleeping" by the end of the circumcision, but I knew it was from exhaustion and defeat.

I had watched as his fragile, desperate, and immobilized body struggled and resisted until it couldn't do so anymore, and gave up.

Seeing this happen made me feel completely sick to my stomach and I told myself that I would absolutely refuse to watch another circumcision if the opportunity presented itself again. I was unable to stop thinking about what I saw and heard...

The sounds that I heard come from Landon as he screamed and cried out still haunt me to this day.

A few weeks later when I felt somewhat ready to revisit the topic, I began researching why this was being done to infant boys. It didn't take long before I learned the truths about circumcision - truths that were never told to me during nursing school. I was never taught about the possibility of keeping boys intact or anything about the foreskin or intact care.

During one lecture, I learned about post-op circumcision care as if it was the default to circumcise baby boys. It was as if there was no other option -- this was just what we do. My own research revealed that not only was there an alternative, but that this alternative was the only acceptable and ethical option.

I learned that the United States is one of the few countries that is still routinely circumcising newborn babies, and that this procedure is condemned by most of the world, including Europe.

I learned that the foreskin is not just a useless flap of skin at the end of the penis, but it is a normal, healthy, and functioning organ that is present on every mammal, male and female.

I learned that male foreskin has important protective, immunological, and sexual functions.

I learned that for infants and young children, the foreskin is fused to the glans (head) of the penis (as our nails are fused to our fingers), and that circumcision requires the forcible separation of these structures.

I learned that research evidence does not support the alleged health benefits of circumcision (such as a lowered HIV risk and fewer UTIs) and that the studies that did show benefits had relied on flawed methodology.

I learned how easy it is to care for an intact penis on a child, and that cleaning it is just like wiping a finger (as opposed to all of that troublesome circumcision care that I was taught in nursing school).

Most horrifically, I learned that over 100 infant deaths occur yearly from circumcision related complications, such as hemorrhage.

I still believe that Landon's parents, in consenting to the circumcision that I witnessed, truly thought that they were doing what was best for their child. Unfortunately, they weren't given factual and complete information either, and therefore were not able to make an informed decision. They didn't see what their son experienced while restrained to a plastic board, and only saw the "peaceful" sleeping state that his body was in when he was returned to them, post-defeat. Maybe they were told that he "slept right through it" or that he "took it like a champ" just like so many other parents are.

The neuropsychological effects of circumcision have been well-documented, but are almost never spoken of. Most likely, Landon had entered a state of withdrawal, dissociation, and exhaustion after enduring an unbearable trauma to his body that he was unable to escape from. 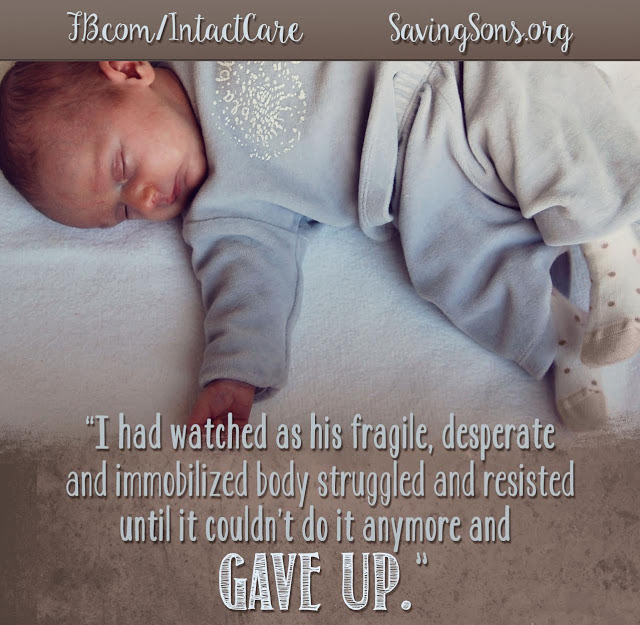 Like me, you probably haven't heard these truths about circumcision from any health care professional. I still remember how much my faith in the nursing profession shattered on that day. I remember questioning: how could such a blatant violation of the Code of Ethics for Nurses not only be allowed to happen, but be promoted by so many nurses? How could so many members of the "most trusted profession" (as ranked by a yearly Gallop poll - something that was often bragged about by my nursing school professors) be complicit in this atrocity?

Instead of signing that consent form, ask yourself: what is truly best for my son? If my son could speak up, what would he want for himself?

Instead of telling your doctor that you'd like to have your son circumcised, you can say that you will not allow them to harm your precious child. Instead of handing your son over to be strapped to that board, you can hold his warm and tiny body close to your chest and assure him that he'll be kept safe in your loving arms.

Parents, you have the power to protect your son from the unnecessary pain and trauma that Landon was forced to endure. Keep your son intact. 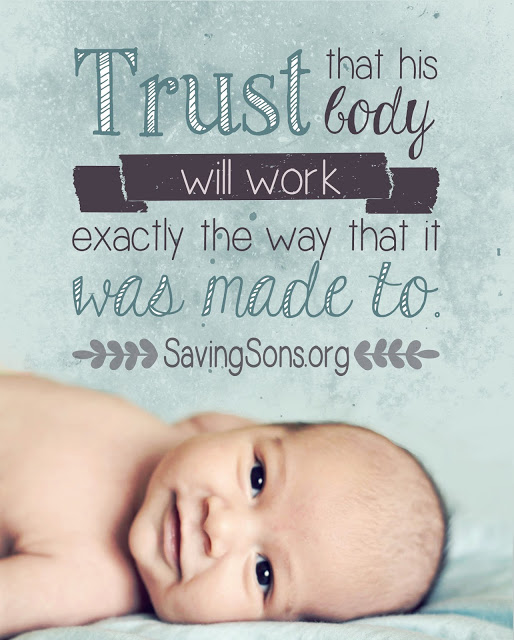 Graphics by Intact Asheville
Available educational postcards for sharing with patients or friends at SavingSons.org/p/info-cards.html or on Etsy 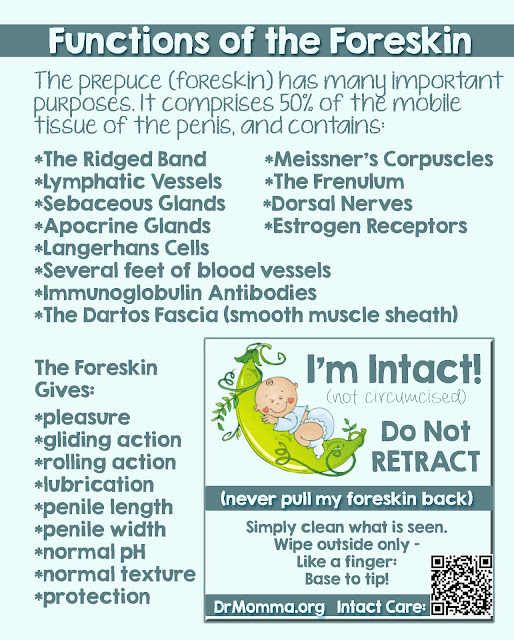 On the ethics of registered nurses assisting in forced infant circumcision:
DrMomma.org/2014/04/on-ethics-of-registered-nurses.html

The day I withdrew from nursing school:
DrMomma.org/2010/01/day-i-withdrew-from-nursing-school.html

Using a catheter without retraction: my nurse did it and so can yours:
SavingSons.org/2013/01/using-catheter-without-retraction-my.html

Medical Professionals for Genital Autonomy
FB.com/IntactCare (to volunteer to respond to parents' questions or be on the MedPro advisory panel, email SavingSons@gmail.com)

Intact: Healthy, Happy, Whole Group - an exploratory community group for those raising intact sons, and families looking into the subject for the first time
FB.com/groups/IntactHealthy