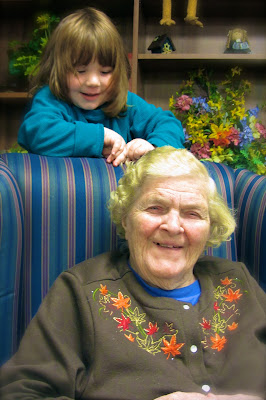 It was on this evening, 98 years ago -- November 29, 1913 -- that my great grandmother slid gently into her fourth birthing day, at home, in the wintery Wisconsin countryside. As Grandma turns 98 years wise (tomorrow morning) one of her favorite pastimes is to jot down poetry in a tattered notebook that she says "comes to her" in the early morning hours. She has fabulously long stanzas of poetry that she memorized some 70+ years ago, scribbled by aged, work-worn hands. I asked her tonight if she had any special items she'd like to read on the eve of her birthday. She shared that "The Children's Hour" is one of her favorites, and that it may also be a good one to pass along to all of you. And so, that is just what we'll do.

It was written by Henry Wadsworth Longfellow (1807-1882) who lived his early life in Portland, Maine, and later taught at Harvard, raising his six children in Cambridge, Massachusetts. Henry adored his little ones (only five lived into adulthood - three girls, two boys), and he raised them most of their childhood as a single father after his second wife, Fanny, died in a fire at their home.

In this poem, he mentions his three daughters by name - Alice, Allegra and Edith, and describes the "broad hall" staircase that can still be descended today at the Longfellow House (now a National Historical Site). It is from this poem that we get our now-ubiquitous phrase, "the patter of little feet" and, as my grandmother pointed out, we hear a reflection of the depths of a father's love for his children.

Although not planned, it seems also fitting to share Henry's work today (Nov 29th) as it was on this very day, in 1835, that he (28 years old at the time) lost his first wife, Mary, after a miscarriage while they traveled Europe. He was devastated by the loss of his 'best friend,' but vowed to dedicate himself to a life of "goodness and purity like hers."

The following year he began teaching literature at Harvard; three years later, Henry published his first collection of poetry, and eventually proposed to Boston-living Fanny, who promptly turned him down. She changed her mind after seven years passed, and birthed the babies who would later bring so much light to Henry's life and softly mold him into a tender, dear ol' dad. 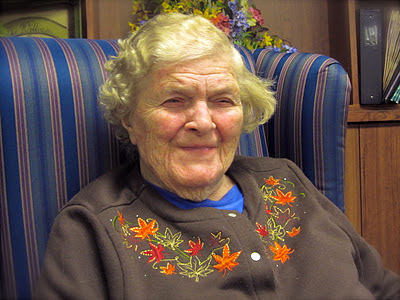 With a sparkle in her eye, tonight my grandma ignores her scribbled words of Henry Longfellow's "The Children's Hour" and instead, recites his reflections from memory as though they are her own:

Between the dark and the daylight,
When the night is beginning to lower,
Comes a pause in the day's occupations,
That is known as the Children's Hour.


I hear in the chamber above me
The patter of little feet,
The sound of a door that is opened,
And voices soft and sweet.


From my study I see in the lamplight,
Descending the broad hall stair,
Grave Alice, and laughing Allegra,
And Edith with golden hair.


A whisper, and then a silence:
Yet I know by their merry eyes
They are plotting and planning together
To take me by surprise.


A sudden rush from the stairway,
A sudden raid from the hall!
By three doors left unguarded
They enter my castle wall!


They climb up into my turret
O'er the arms and back of my chair;
If I try to escape, they surround me;
They seem to be everywhere.


They almost devour me with kisses,
Their arms about me entwine,
Till I think of the Bishop of Bingen
In his Mouse-Tower on the Rhine!


Do you think, O blue-eyed banditti,
Because you have scaled the wall,
Such an old mustache as I am
Is not a match for you all!


I have you fast in my fortress,
And will not let you depart,
But put you down into the dungeon
In the round-tower of my heart.


And there will I keep you forever,
Yes, forever and a day,
Till the walls shall crumble to ruin,
And moulder in dust away! 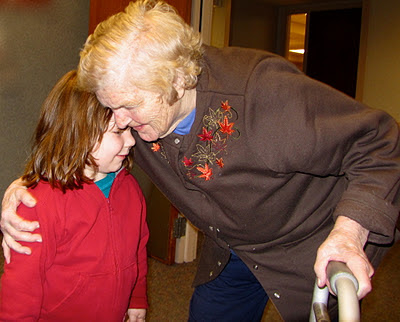 If listening is more your thing: