10 Reasons to Nurse Your Toddler

By Elizabeth Bruce
posted with permission 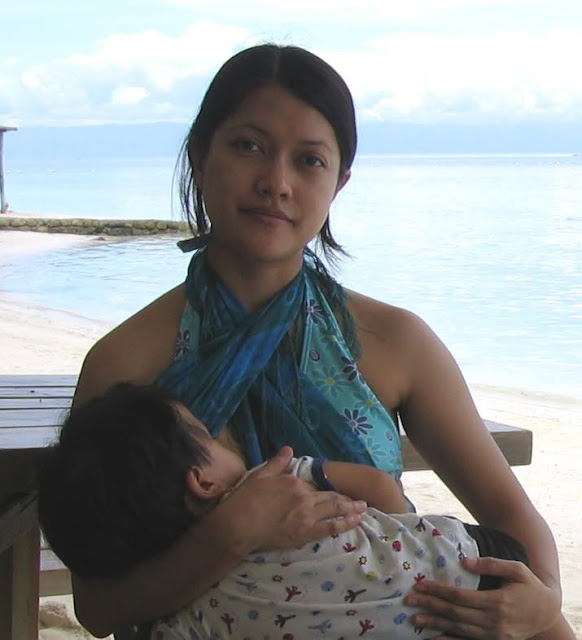 Alexis Rodrigo, former staff of UNICEF Philippines, nurses her toddler by the beach

The average American may not be ready to admit it, but myriad cultures past and present have accepted the fact that babies past infancy can benefit from nursing. The !Kung of Africa represent the natural state of human feeding. Mothers of this nomadic tribe breastfeed each child for up to six years. Sherman Silber, MD, points out that "the human species has spent more than 90 percent of its existence leading this type of nomadic hunter/gatherer life, and 'civilization' with its pressures is too recent to have had any appreciable impact on their genetic makeup." (1) In our culture, many men and women are uncomfortable with the functional role of breasts, probably because of our national obsession with breasts as sexual objects. Unfortunately, people's psychological discomfort seems to increase as the nursing baby grows. Most Americans choose to wean their babies at about six months.

Whatever the psychological complexities may be, we can no longer deny the health and social benefits of prolonged breastfeeding. Even the conservative American Academy of Pediatrics now officially recommends that breastfeeding continue for at least 12 months. (2) But what about nursing through a baby's second or even third year? Is breast still best for toddlers? If we can get past our collective ambivalence, I think the answer is a resounding "yes."

While most of your neighbors probably aren't doing it, there are plenty of enlightened mothers out there who are. Alice Bailes, CNM, co-owner of Birth Care and Women's Health in Alexandria, Virginia, says that the majority of her clients breastfeed well into their babies' second year. In fact, she has clients who tandem nurse--they continue nursing their toddler through their next pregnancy and even after the new baby is born. Bailes, who has had personal experience tandem nursing, believes that it helps a toddler's transition into being a big brother or sister.

Of course, the decision to continue nursing is a personal one, and it often is not made until the time comes. Rest assured, according to most moms who have decided to keep going, once you've managed to breastfeed through the challenging first year the rest is a breeze. In case you're still not convinced, I am sharing my top ten reasons to breastfeed your toddler.

I must confess that convenience was my number one reason for continuing to breastfeed my babies. OK, call it laziness. For one thing, weaning a baby before he's ready takes a lot of time and effort. You have to carry messy snacks around and deal with tantrums. Fortunately, by the time the baby turns one, most moms have mastered the art of discretion, so nursing is the easiest thing in the world to do with a minimum of privacy.

Even better, there is no easier way to get a toddler to sleep on your schedule than by nursing him. I always feel sorry for mothers of toddlers who aren't nursing, because their job is probably a lot harder than mine. If worse comes to worst, I know an induced nap is right around the corner.

As any parent of a toddler knows, they are naturally insecure creatures. One moment your one year old is happy, and the next she is dissolved in a puddle of tears--seemingly over nothing. Well, surprise! Often the best way to handle your volatile toddler is to briefly treat her like a baby. Take her in your arms nurse her for a few minutes, and voilà!--your little screamer is transformed into a confident child once again. If you're at a party when your child melts down, you can discreetly take him or her into another room or to the car. Friends will marvel at your great mothering abilities when you return with a magically transformed, happy toddler.

The toddler years are peak years for attachment objects like blankets and dolls. The major problem with these objects is that they can be lost. Such an episode can take on tragic proportions. Believe me, I know because my first son never nursed. There's nothing quite like arriving at a Holiday Inn after a day of traveling with a cranky toddler only to discover you have left the critical object at a rest stop 300 miles back!

Life is too short for all that unnecessary drama. If you are nursing your toddler, you can forget the frantic search for an identical blanket and the Fed-Exing of Barney. With Mommy as the primary security object, you can rest easy on those long family trips. It is basically impossible to lose a breast, no matter how distracted you are! Plus, you never have to steal the beloved object away for a round in the washing machine. Much trauma is spared for all.

My second little boy was so attached to nursing that I became a toddler nurser. He ate absolutely no solid food until he was 17 months old. Even La Leche League veterans suggested that the situation was, well, unusual. Looking back, I think my baby's wisdom was in avoiding possible allergens. Studies (as well as anecdotal evidence) indicate that breastfeeding reduces the incidence of allergies. (3,4) My first child, who was solely formula-fed, had all sorts of food allergies, including rice and dairy products. In hindsight, my second child's lengthy, exclusive breastfeeding makes sense. Most likely, it was nature's way of protecting him from foods his body just was not ready to process. Undoubtedly, some children need longer than others to "outgrow" their allergies, and breastmilk provides the ideal support for their developing immune systems.

Good nutrition is admittedly tricky with toddlers. On some days they cram every morsel offered into their mouths, and other days you can't coax them to take a bite of even their favorite food. In short, they're picky eaters, and their appetites are capricious and unpredictable.

One popular myth that even pediatricians promote is that breastfeeding somehow loses its nutritional quality after the first year. In reality, the benefits change, but they are still there. Does it really make sense that after 12 months of providing your baby with optimal nutrition the breasts suddenly get "stupid" and start making something "less than optimal"? Obviously, the addition of solid foods changes the balance, but breastmilk is still an important element in the diet while your baby is sampling what the world has to offer. Certainly, there can be no harm in continuing with nature's perfect food.

In general, it's believed that breastfeeding provides better development of the teeth and jaws than sucking a hard, unnaturally shaped nipple.5 Margaret Connor, a 35-year-old mother in Austin, Texas, has discussed the subject at length with her son's speech therapist. Both of them believe that Connor's five-year-old son's speech/motor apraxia would have been worse if his muscles had not been "worked out" through extended nursing. If nothing else, Connor is happy she made the decision she did. "At least I won't look back and wonder if his articulation would have been better if I had breastfed longer than a year," she says.

Unfortunately, toddlers, breastfed and otherwise, get sick. Some get sick a lot, especially those in child care and those with older siblings. When my 14-month-old son got bronchitis, he wouldn't eat or drink anything other than breastmilk. Had he not been breastfeeding, the situation could have turned into a nightmare. When a bottle-fed baby gets dehydrated, the parents have to struggle to get oral rehydration products down the child. When this tactic doesn't work, pediatricians have no choice but to order an IV for the child at the hospital. This is not only traumatic for a toddler, but it also exposes him to other germs that could complicate the original infection. With breastfeeding, you can almost always get the child to nurse, which might even save his life! Further, it comforts the mother. It feels so much better to be able to help your child through illness in a uniquely positive way.

It's accepted that a woman's body stores up enough fat during pregnancy to exclusively feed her infant for at least the first year. While there are few studies on this topic, anecdotal evidence suggests that a mother's weight loss may continue during the second year of nursing a baby. The fact is, Mother Nature never intended for human babies to be weaned from their mothers in the early months, so our bodies make sure we have plenty of fat stored up for years.

For the first year, our bodies seem to like to stay soft, almost like a cushion for the infant. After that time, the weight is not quite so resistant to leaving. The increased calorie requirements of toddlers help the process of weight loss as well. For every day she nurses, a lactating woman uses an extra 500 calories. Personally, I found that stubborn fat stores that had lived on my thighs for years melted away during the second year of nursing.

For those women using Natural Family Planning or the Fertility Awareness Method for birth control, breastfeeding provides a bonus. Research done by the Kippleys in The Art of Natural Family Planning showed that a nursing mother who uses no supplements for the first four to six months gets her first postpartum period on average after 13 to 16 months. (6) Among the !Kung tribe, babies are spaced about 48 months apart--all due to exclusive breastfeeding. (7) Contrast this with the usual six to eight weeks for a bottle-feeding mother. Naturally, PMS and the other related troubles usually disappear for as long as the periods stay away, and the return of fertility is also put off. In addition, delayed menstruation means decreased exposure to estrogen, which may protect against cancer of the breast and reproductive organs. Breast cancer risk is associated with earlier menarche and later menopause, which points to estrogen exposure as a risk factor for the disease. (8,9)

It's Good for the Planet

Breastfeeding is the best ecological thing going. No cups to wash, no bottles to sterilize, and nothing for the landfill. Postponing the use of cows' milk helps our planet. Because of their methane gas emissions, cows are major destroyers of the atmosphere. (10) Overgrazing of land is responsible for serious ecological troubles, as well. As a bonus, the baby is not exposed to the unhealthy hormones and antibiotics injected into dairy cows.

Like most other mothers of toddlers, I originally continued nursing out of a desire for convenience. Frankly, it was just easier to keep going than to stop. Along the way, I discovered how much simpler continuing to breastfeed made our lives. If at all possible, the transition away from Mommy should be a gradual one, made at the baby's own pace. Toddler life is difficult enough. Why not make it a little more manageable for everyone?


Elizabeth Bruce, CCE, MA, mothered her four children at home and nursed all of them beyond the toddler years.

Image by Rachele B. of Woman Uncensored 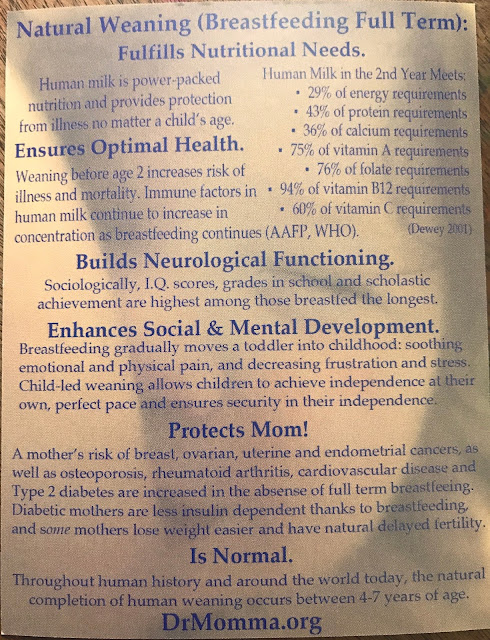 Natural weaning postcards to share with mothers available at Etsy.