Expectant parents often fear the changes a new baby will bring, especially sleepless nights. What new parent wouldn’t want a how-to book that promises their baby will be sleeping through the night by three to eight weeks?

One such book, On Becoming Babywise, has raised concern among pediatricians because it outlines an infant feeding program that has been associated with failure to thrive (FTT), poor weight gain, dehydration, breast milk supply failure, and involuntary early weaning. A Forsyth Medical Hospital Review Committee, in Winston-Salem N.C., has listed 11 areas in which the program is inadequately supported by conventional medical practice. The Child Abuse Prevention Council Of Orange County, Calif., stated its concern after physicians called them with reports of dehydration, slow growth and development, and FTT associated with the program. And on Feb. 8, AAP District IV passed a resolution asking the Academy to investigate “Babywise,” determine the extent of its effects on infant health and alert its members, other organizations and parents of its findings.

I have reviewed numerous accounts of low weight gain and FTT associated with “Babywise” and discussed them with several pediatricians and lactation consultants involved.

The book’s feeding schedule, called Parent Directed Feeding (PDF), consists of feeding newborns at intervals of three to three and one-half hours (described as two and one-half to three hours from the end of the last 30- minute feeding) beginning at birth. Nighttime feedings are eliminated at eight weeks.

This advice is in direct opposition to the latest AAP recommendations on newborn feeding (AAP Policy Statement, “Breastfeeding and the Use of Human Milk,” Pediatrics, Dec. 1997): “Newborns should be nursed whenever they show signs of hunger, such as increased alertness or activity, mouthing, or rooting. Crying is a late indicator of hunger. Newborns should be nursed approximately eight to 12 times every 24 hours until satiety...”

Although demand feeding is endorsed by the Academy, WHO, and La Leche League among others, “Babywise” claims that demand feeding may he harmful and outlines a feeding schedule in contrast to it. The book makes numerous medical statements without references or research, despite that many are the antitheses of well-known medical research findings. In 190 pages, only two pediatric journals are referenced with citations dated 1982 and 1986.

Many parents are unaware of problems because the book is marketed as medically supported. It is co-authored by pediatrician Robert Bucknam, M.D., who not only states in the book that the “Babywise” principles are medically sound,” but also writes, “Babywise” has brought a needed reformation to pediatric counsel given to new parents.” Obstetrician Sharon Nelson, M.D., also warns: “Not following the principles of “Babywise” is a potential health concern.”

The book’s other author is Gary Ezzo, a pastor with no medical background. Ezzo’s company, Growing Families International (GFI), markets the book as “ideally written” for “obstetricians, pediatricians, or health-care providers to distribute to their patients.” (GFI promotes the same program under the title “Preparation for Parenting,” a virtual duplicate with added religious material).

Though “Babywise” does say, “With PDF a mother feeds her baby when the baby is hungry,” it also instructs parents to do otherwise. In a question-and-answer section, parents of a 2-week-old baby, who did not get a full feeding at the last scheduled time and wants to eat again, are instructed that babies learn quickly from the laws of natural consequences. “If your daughter doesn’t eat at one feeding, then make her wait until the next one.”

Unfortunately, the schedule in “Babywise” does not take into account differences among breastfeeding women and babies. According to one report, differences of up to 300 percent in the maximum milk storage capacity of women’s breasts mean that, although women have the capability of producing the same amount of milk over a 24-hour period for their infants, some will have to breastfeed far more frequently than others to maintain that supply. Babies must feed when they need to, with intervals and duration determined according to a variety of factors in temperament, environment, and physiological makeup. Averages may fit into a bell-shaped curve, but some babies will require shorter intervals. (Daly S., Hartmann P. “Infant demand and milk supply, Part 2. The short-term control of milk synthesis in lactating women.” Journal of Human Lactation; 11; (1):27-37).

Examples of the many other un- substantiated medical claims in “Babywise” include:

• “Lack of regularity [in feeding intervals] sends a negative signal to the baby’s body, creating metabolic confusion that negatively affects his or her hunger, digestive, and sleep/wake cycles.”

• “Mothers following PDF have little or no problem with the let down reflex, compared to those who demand-feed.”

• “Colic, which basically is a spasm in the baby’s intestinal tract that causes pain, is very rare in PDF babies but is intensified in demand-fed babies.”

• “In our opinion, much more developmental damage is done to a child by holding him or her constantly than by putting the baby down. In terms of biomechanics alone, carrying a baby in a sling can increase neck and back problems, or even create them.”

• “Some researchers suggest that putting a baby on his or her back for sleep, rather than on the baby’s tummy, will reduce the chance of crib death. That research is not conclusive, and the method of gathering supportive data is questionable.”

My review of the low weight gain and FTT accounts associated with “Babywise” revealed several disturbing trends. Parents were often adamant about continuing with the feeding schedule, even when advised otherwise by health care professionals. They were hesitant to tell their physicians about the schedule, making it difficult to pinpoint the cause for the weight gain problems. Many elected to supplement or wean to formula rather than continue breastfeeding at the expense of the schedule. The parents’ commitment call be especially strong when they are using the program for religious reasons, even though numerous leaders within the same religious communities have publicly expressed concerns.

Pediatricians need to know about “Babywise” and recognize its potential dangers. History taking should include questions to determine if parents are using a feeding schedule, especially before advising formula supplement to breastfeeding mothers or when faced with a low-gaining or possible failure to thrive baby. Lactation consultants also should be instructed to probe this area.
Efforts should be made to inform parents of the AAP recommended policies for breastfeeding and the potentially harmful consequences of not following them.

Dr. Matthew Aney is an AAP candidate fellow based in Lancaster, California.

~~~~
For more on Babywise, the Ezzos and Growing Kids God's Way methods see:

The Case for Cue Feeding (rather than PDF - "parent directed feeding") 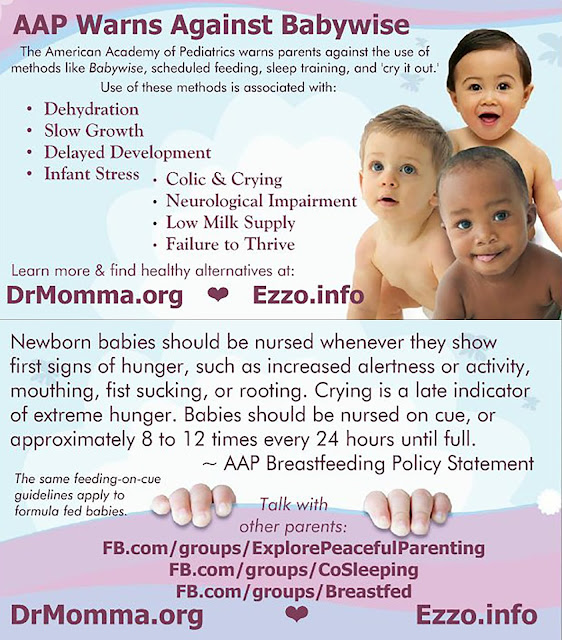 Cards available at Etsy to share with clients,
add to baby information books, or distribute in your area.