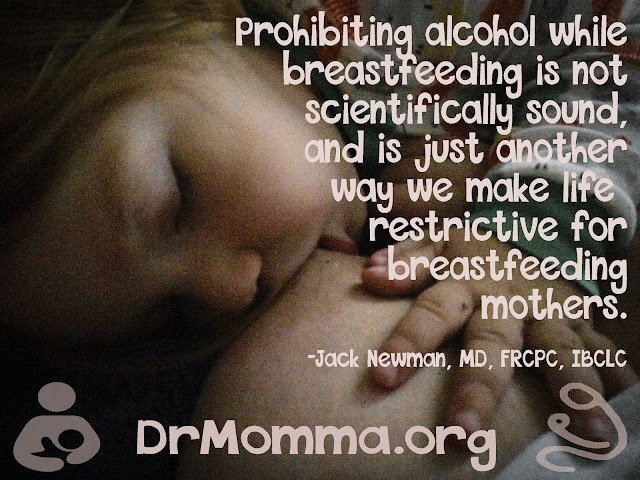 Around the holidays, and with events such as weddings and family gatherings, many parents write to ask about breastfeeding and alcoholic drinks. To begin, in short: you do not need to "pump and dump" (a terrible expression) afterward having a drink, and you do not need to wait a certain amount of time after your drink to restart breastfeeding. The amount of alcohol that gets into the milk is minuscule and will not hurt baby.

I am not saying it is fine to get falling-down drunk because if you are breastfeeding, you must be sober and capable of caring for your baby safely. However, the problem is your coordination and ability to parent your child -- not the amount of alcohol in your milk.

The following is from a scientist who tested her own milk for alcohol and shared these results with me. She did not test with one of those useless kits that you can buy at various stores (they are designed solely to profit off breastfeeding mothers), but instead she tested at a toxicology laboratory. I will copy from her post the methods she used and the results. I think this puts to rest the notion that women should not drink while breastfeeding, or that they need to "pump and dump" (an appalling term) after having even one drink.

Another day, 1/2 of a beer (4.3% alcohol) and 2-6 oz glasses of wine were consumed within 1.5 hours. About an hour from the beginning of the last drink, a milk sample (about 1 mL) was taken. This sample was labeled '1 hour - 3 drinks.' Another sample was taken about an hour after that (2 hours after the beginning of the last drink). This sample was labeled '2 hours - 3 drinks.' The samples were stored in the refrigerator until processing.

An Agilent headspace instrument was used to run the tests. Propanol and ethanol standards were also tested to ensure the instrument was within limits. The instrument is maintained by the KSP Lab Toxicology Section and used in forensic determinations of blood and urine alcohol content.

A good deal of the confusion that exists, or the roots of confusion over breastfeeding and alcohol consumption, stem from the fact that alcohol consumption during pregnancy is not safe for a growing baby inside, being fed directly from the placenta. "People tend to treat the two scenarios in the same way, but the mechanisms of exposure to alcohol are entirely different," says Kirsten Goa, chair of La Leche League Canada. "In utero, you’re sharing your bloodstream with your baby; if you’re drunk, your baby is even more drunk because they’re so small and their liver is still developing. But your breastmilk only contains the same amount of alcohol as your bloodstream." Drink responsibly, and within reason (i.e. do not become too intoxicated to care for your baby) and all well be well. 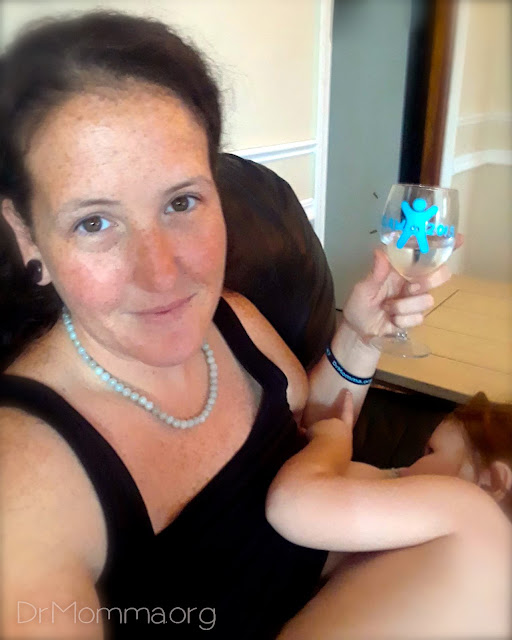 The timing of drinking doesn’t matter, either. So, don’t be tempted to “pump and dump,” which is a waste of perfectly good milk. Breastfeeding is a relationship between a child and mother, and if that child is old enough to be upset at not being fed, you’re doing far more harm to your baby than if you were to breastfeed after (or during) a couple of drinks. If we forbid having a drink while breastfeeding, mothers become discouraged to breastfeed at all -- doing far more damage to a developing child, than the non-risk that exists in having drink and breastfeeding too. Because the World Health Organization, and virtually every pediatric organization the world over recommends a minimum 24 months of human milk for human babies, tacking two years onto the 9-10 months of pregnancy (when consuming alcohol is not safe), is extreme and not scientifically justified.

In the case of premature babies who are in the NICU, and receiving expressed milk, or nursing directly from mom with hospitalized care, Goa advises LLL moms to avoid alcohol until baby is home merely because these premature babies are more sensitive than a baby born at full term. However, if the option is (1) human milk from a mother who has had a drink vs. (2) formula, human milk is always the better option for baby's health and development.

Goa notes that this is "all about parental function." "If we are going to be honest with mothers, even if they go on a bender and have someone to safely look after their baby, by the time she sobers enough to safely care for her baby, she is okay to breastfeed." Prohibiting alcohol while breastfeeding is not scientifically sound, and is just another way we make life restrictive for breastfeeding mothers. 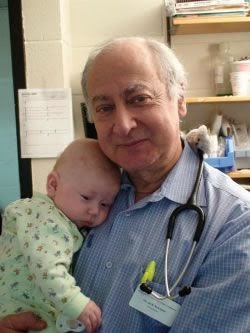 Dr. Jack Newman graduated from the University of Toronto medical school in 1970, interning at the Vancouver General Hospital. He did his training in pediatrics in Quebec City and then at the Hospital for Sick Children in Toronto from 1977-1981 to become a Fellow of the Royal College of Physicians of Canada in 1981 as well as Board Certified by the AAP in 1981. He has worked as a physician in Central America, New Zealand and as a pediatrician in South Africa (in the Transkei). He founded the first hospital based breastfeeding clinic in Canada in 1984. He has been a consultant for UNICEF for the Baby Friendly Hospital Initiative, evaluating the first candidate hospitals in Gabon, the Ivory Coast and Canada.

Dr. Newman was a staff pediatrician at the Hospital for Sick Children emergency department from 1983 to 1992, and was, for a period of time, the acting chief of the emergency services. However, once the breastfeeding clinic started functioning, it took more and more of his time and he eventually worked full time helping mothers and babies succeed with breastfeeding. He now works at the Newman Breastfeeding Clinic and Institute based at the Canadian College of Naturopathic Medicine in Toronto.

Dr. Newman has several publications on breastfeeding, and in 2000 published, along with Teresa Pitman, a help guide for professionals and mothers on breastfeeding, called, Dr. Jack Newman's Guide to Breastfeeding, (revised editions: 2003, 2005, 2009, 2015), and The Ultimate Breastfeeding Book of Answers, (revised edition: 2006). The book has been translated into French, Indonesian, Japanese, Spanish and Italian. In 2006, Dr. Newman, along with Teresa Pitman, published The Latch and Other Keys to Breastfeeding Success (Hale Publishing) and was translated into French. He has also, along with Edith Kernerman, developed a DVD as a teaching tool for health professionals and mothers. It is available in English and French. As well, it is subtitled in Spanish, Portuguese and Italian.