This measure would, among other things, call upon stakeholders in the health professions to foster the well-being of children born with variations of sex characteristics through the enactment of policies and procedures that ensure individualized, multidisciplinary care, as provided.

BILL TEXT WHEREAS, Between 1 and 2 percent of individuals are Individuals born with variations in their physical sex characteristics, which may include may present with differences in genital anatomy, internal reproductive structures, chromosomes, or hormonal variations; and

WHEREAS, “Intersex” refers to the variety of different physical indicators that create these differences, which occur with about the same frequency as green eyes; differences; and

WHEREAS, The majority of babies born with these variations are healthy or do may not require medical intervention related to their physical sex characteristics until puberty, immediately, if at all; and

WHEREAS, Beginning in the 1950s, physicians in the United States began performing irreversible surgeries on intersex infants without medical justification in an attempt to surgically and hormonally force them to conform to what these physicians perceived as typical male and female bodies; and

WHEREAS, These surgeries, which include nonconsensual unnecessary infant vaginoplasties, clitoral reductions, reductions and recessions, and removal of gonadal tissues, continue to this day; and

WHEREAS, These surgeries are often performed before a child can even speak or stand, meaning the intersex individual is excluded from the decision whether to undergo these irreversible procedures; and

WHEREAS, There is evidence that these surgeries cause severe psychological and physiological harm when performed without the informed consent of the individual; and

WHEREAS, These harms may include scarring, chronic pain, urinary incontinence, loss of sexual sensation and function, depression, post-traumatic stress disorder, suicidality, and incorrect gender assignment; and

WHEREAS, Despite that being born intersex is not a flaw or shortcoming, intersex people and their families across California report difficulties accessing competent medical care that does not emphasize surgery, such as one mother, a resident of California interviewed by Human Rights Watch, who explained: “I just wish someone had said: ‘she’s OK, she’s perfectly healthy, there’s nothing wrong with her, surgery can happen later and here are some people who have been through your situation.’”; and

WHEREAS, The United Nations Special Rapporteur on Torture and Other Cruel, Inhuman or Degrading Treatment or Punishment explained in 2013, “Children who are born with atypical sex characteristics are often subject to irreversible sex assignment, involuntary sterilization, involuntary genital normalizing surgery, performed without their informed consent, or that of their parents, ‘in an attempt to fix their sex,’ leaving them with permanent, irreversible infertility and causing severe mental suffering.”; and

WHEREAS, The United Nations High Commissioner for Human Rights explained in 2015, “medically unnecessary surgeries and other invasive treatment of intersex babies and children… are rarely discussed and even more rarely investigated or prosecuted... . The result is impunity for the perpetrators; lack of remedy for victims; and a perpetuating cycle of ignorance and abuse... . We need to bridge the gap between legislation and the lived realities of intersex people.”; and

WHEREAS, The World Health Organization explained, also in 2015, that intersex children have been “subjected to medically unnecessary, often irreversible, interventions that may have lifelong consequences for their physical and mental health, including irreversible termination of all or some of their reproductive and sexual capacity… Human rights bodies and ethical and health professional organizations have recommended that free and informed consent should be ensured in medical interventions for people with intersex conditions, including full information, orally and in writing, on the suggested treatment, its justification and alternatives.”; and

WHEREAS, Physicians for Human Rights has “call[ed] for an end to all medically unnecessary surgical procedures on intersex children before they are able to give meaningful consent to such surgeries.”; and

WHEREAS, Human Rights Watch concluded that these surgeries are “often catastrophic, the supposed benefits are largely unproven, and there are generally no urgent health considerations at stake. Procedures that could be delayed until intersex children are old enough to decide whether they want them are instead performed on infants who then have to live with the consequences for a lifetime.”; and

WHEREAS, The Intersex and Genderqueer Recognition Project, the preeminent organization in the United States to address the rights of people to self-identify as nonbinary on government-issued documents, was founded by intersex individuals and “envisions a world that recognizes that sex, gender identity, and sexual orientation have endless variations, with all possibilities valued and respected,” and consequently calls for a delay of all medically unnecessary procedures on intersex children until the individual can participate in the decision; and

WHEREAS, The United States Department of State has commemorated Intersex Awareness Day in both 2016 and 2017 by recognizing the harm of these surgeries, stating “at a young age, intersex persons routinely face forced medical surgeries without free or informed consent. These interventions jeopardize their physical integrity and ability to live freely.”; and

WHEREAS, The largest intersex patient support group in the United States, the AIS-DSD Support Group, has called for a delay of all medically unnecessary procedures on intersex children until the individual can participate in the decision; and

WHEREAS, The largest advocacy organization in the United States dedicated exclusively to intersex advocacy, interACT: Advocates for Intersex Youth, was founded in Cotati, California and has called for a delay of all medically unnecessary procedures on intersex children until the individual can participate in the decision; and

WHEREAS, In light of ongoing advocacy by the intersex community, in 2005 the San Francisco Human Rights Commission performed an investigation into this topic and issued an indepth report, recommending that “‘normalizing’ interventions should not occur in infancy or childhood. Any procedures that are not medically necessary should not be performed unless the patient gives their legal consent.”; and

WHEREAS, Those subjected to medically unnecessary surgery at a young age express despair over the fact that they were unable to make these decisions for themselves, publishing about their experiences in major news outlets: “I know firsthand the devastating impact [these surgeries] can have, not just on our bodies but on our souls. We are erased before we can even tell our doctors who we are. Every human rights organization that has considered this practice has condemned it, some even to the point of recognizing it as akin to torture.”; and

WHEREAS, Physicians who have participated in these surgeries have also expressed remorse that their training did not properly prepare them to respect the bodily autonomy of intersex people, as a Stanford-educated urologist explains: “I know intersex women who have never experienced orgasm because clitoral surgery destroyed their sensation; men who underwent a dozen penile surgeries before they even hit puberty; people who had false vaginas created that scarred and led to a lifetime of pain during intercourse…the psychological damage caused by intervention is just as staggering, as evidenced by generations of intersex adults dealing with post-traumatic stress disorder, problems with intimacy and severe depression. Some were even surgically assigned a gender at birth, only to grow up identifying with the opposite gender.”; and

WHEREAS, Intersex young people who have been able to participate in these life-altering decisions are thriving, such as a young intersex San Francisco resident who was not forced to undergo surgery in infancy and instead participated in the decision at the age of 16, who told reporters that for them, surgery “was the right choice, but that’s very much an anomaly for intersex people... . The important thing was that I was old enough to make that decision for myself.”; and

WHEREAS, When the physical health of an infant with atypical sex characteristics is threatened and medical attention cannot be safely deferred, all therapeutic treatment options should remain available to children, families, and medical professionals to ensure that the imminent physical danger is addressed; and

WHEREAS, Medically unnecessary procedures, including all surgical procedures that seek to alter the gonads, genitals, or internal sex organs of children with atypical sex characteristics too young to participate in the decision, when those procedures carry both a meaningful risk of harm and can be safely deferred, are the sole subject of this resolution; and

WHEREAS, California should serve as a model of competent and ethical medical care and has a compelling interest in protecting the physical and psychological well-being of minors, including intersex youth; now, therefore, be it

Resolved by the Senate of the State of California, the Assembly thereof concurring, That the Legislature opposes all forms of prejudice, bias, or discrimination and affirms its commitment to the safety and security of all children, including those born with variations in their physical sex characteristics; and be it further

Resolved, That the Legislature considers intersex children a part of the fabric of our state’s diversity to be celebrated rather than an aberration to be corrected; and be it further

Resolved, That the Legislature recognizes that intersex children should be free to choose whether to undergo life-altering surgeries that irreversibly—and sometimes irreparably—cause harm; and be it further

Resolved, That the Legislature calls upon stakeholders in the health professions to foster the well-being of children born with variations of sex characteristics, and the adults they will become, through the enactment of policies and procedures that ensure individualized, multidisciplinary care that respects the rights of the patient to participate in decisions, defers medical or surgical intervention, as warranted, until the child is able to participate in decisionmaking, and provides support to promote patient and family well-being; and be it further

Resolved, That the Secretary of the Senate transmit copies of this resolution to the author for appropriate distribution. 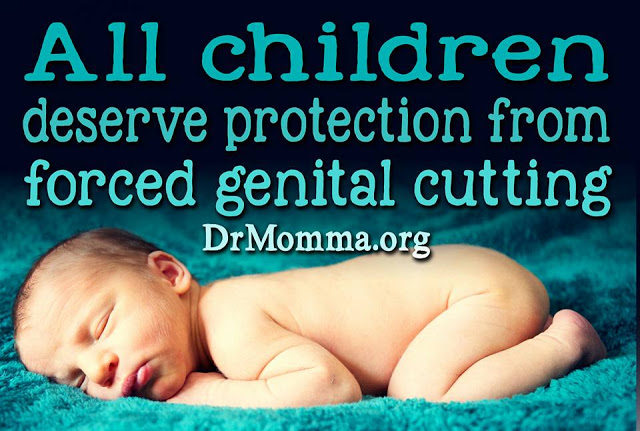 Equal rights for ALL sexes.
Say no to forced genital cutting of minors, regardless of sex at birth. 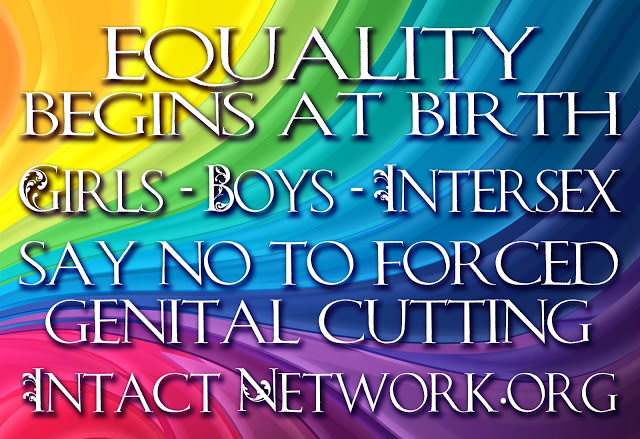