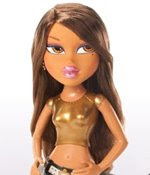 I hate Bratz dolls. I really do. Everything about them bugs me, from their huge heads to their gigantic eyes loaded with makeup, to their sultry lips, next-to-nothing clothes, and overly sexualized bodies. As the mom of an innocent and pure four-and-a-half-year-old daughter, I especially despise the shallow messages implied in the marketing of Bratz dolls, the skewed concept of beauty they encompass, and most of all, I hate the fact that millions of little girls seem to be infatuated with them.

When my daughter came back from a birthday party with a Bratz loot bag and told me all about those really cool dolls that she couldn't wait to own, I was shocked. I couldn't believe that someone had thought it was appropriate to give any Bratz paraphernalia to a four-and-a-half-year-old girl. I was furious that in a society where more and more young girls grow up hating their bodies and start dieting at an early age to fit some unrealistic ideal of beauty, some parents would allow Bratz dolls and other similar accessories into their daughters' worlds. I was especially distraught that Jaime was instantly attracted to the dolls. At the precise moment Jaime declared she wanted to own Bratz dolls, I declared war.

Over the next couple of months, I was relentless in the battle. Whenever the word Bratz was uttered, I reciprocated with, "Ugly," "Mean," and "Bad." I told Jaime I would never buy her a Bratz doll. Period. End of argument.

Unfortunately, it wasn't that easy to discourage Jaime from her interest in the dolls. You see, I have a very spirited daughter who is both stubborn and passionate about what she likes and cares about (some say she takes after her mother). So instead of engaging in meaningful dialogue, we both locked down on our positions, and our conversations were far from productive. It usually sounded like this:

Jaime: "Bratz are so beautiful."

Mom: "Yes, they're ugly, and I think they also look mean. I will never buy you one."

Jaime: "No, they're not. They're beautiful, and I still want one."

And so it continued until one of us (usually me) tired of the conversation.

This battle of wills lasted a few months until the parenting genie decided to hit me with one of those powerful light bulb moments. In the middle of one of our familiar arguments, I suddenly realized that the more I hated the Bratz dolls, the more determined Jaime would be to love them. I needed a much better strategy to get through to Jaime and to win this fight for good.

I also realized I wasn't being an effective role model of communication for Jaime. In my fear that Jaime would grow up with a concept of beauty that would prevent her from growing into a self-loving and self-confident young woman, I had forgotten how to use powerful communication skills as tools to help her develop inner wisdom, inner strength, and self-esteem.

With the best and most loving intentions, many of us often try to shield our children from what we believe are negative influences, things and issues that can harm them or hinder their development. Some of us choose to ban television or certain programs, video games, toys, books, foods, or other things in this effort to protect our children. But when we do this, are we really fulfilling our role as effective parents, that of the guide whose sole purpose is to prepare children for adult life? How can we raise children into confident adults ready to face life if we have only exposed them to selective bits and pieces of what we hope life to be for them?

Let's face it: life isn't lived in a bubble. As nice as it would be, it's simply not realistic to expect kids to transform into smart-thinking, independent, successful individuals if they haven't grown up exposed to the full picture of what the world is really about?the good, the bad, and the ugly?and if they haven't been given the tools necessary to make sense of it all.

From my conversations with Jaime about the Bratz dolls, I also realized that beyond failing to communicate effectively with her about the dolls, I was actually imposing my biases on her. I wasn't explaining much about my issues with the toy. Worse, I wasn't listening to the reasons why she was so drawn to the dolls. Instead of modeling communication and listening skills, I was simply imposing my biases.

What I discovered was that my fear of the power of these dolls over my daughter was preventing me from truly preparing her for the world. Fear is a powerful motivator but not necessarily the smartest one. So I decided to take the power back into my own hands by letting go of my fears of negative influences in my daughter's life and seeing them instead as opportunities to teach Jaime powerful life skills: critical thinking, communication, listening, and the ability to debate effectively and to make informed decisions.

Whenever the Bratz (or any other negative influences) make their way into conversation now, our dialogue has metamorphosed into this:

Jaime: "Mom, did you see these Bratz dolls in the catalogue?"

Jaime: "I like this one because she has long hair. I think she's pretty. Which one do you like mom?"

Mom: "I think I like this one better. She looks like a very kind person and I think that makes her look beautiful."

Jaime: "You're right mom, she does look kind and beautiful, but I still like this one best."

Mom: "That's OK. I'm glad you can explain why this one is your favorite."

With each of these conversations, I press Jaime to explore her likes and dislikes. I encourage her to think about her world and communicate her views effectively. I provide her with a different perspective. I show her that it's OK to disagree with me, and that I don't always agree with her either, but that I respect why she likes something and that I'm proud that she can explain her reasoning. When we disagree on a subject, I make sure I listen to her arguments, and that she listens to mine. I teach her respect by listening and thanking her for explanation. I play devil's advocate to make sure that she can truly explore different sides of an issue before making up her mind.

In other words, I am raising her to be an adult who will think for herself, have the confidence to debate her points of view, have the ability to be compassionate and respectful of others' opinions and, most importantly, who will always think critically about issues rather than passively accepting them.

By taking the power back from the Bratz, I have learned to be a proactive parent, not a reactive parent. I am role-modeling to Jaime the importance of confidence in one's opinions and the value of respect. I have developed trust and faith that with the right tools, Jaime will grow up to be a confident, self-empowered young woman even if it means that I won't always agree with her choices. Just as the loving gardener would do, I am letting Jaime blossom by gentling guiding her growth.

Emmanuelle Goodier is a doula and childbirth educator near Ottawa, Ontario and the proud mom of three smart, spirited, and powerful little debaters.