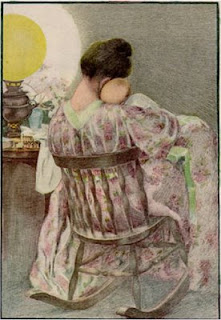 Researchers at the Pediatric Sleep Unit of the University Children's Hospital in Brussels, Belgium, have found that infants who experience rocking motion have fewer interrupted breathing episodes during sleep. This important research adds to the growing information base that vestibular motion activities (such as rocking and wearing your baby) decrease SIDS risk by helping the infant body to regulate breathing.

For this small study, eighteen infants who had documented obstructed sleep apnea (i.e. they had regular and frequent episodes during sleep where they momentarily stopped breathing) were studied. Eight of the babies were premature with persistent bradycardias, and ten were full term babies who were admitted to the Children's Hospital after an apparently life-threatening breathing event. There was no physiological cause for the apneas found in any of the eighteen infants.

Obstructive sleep apnea (OSA) is the most common type of sleep apnea and is known by its repetitive pauses in breathing during sleep. Typically OSA is also associated with a reduction in blood oxygen saturation (i.e. less oxygen is moving throughout the body during sleep, and less oxygen is therefore feeding the brain). Apnea means "without breath" and these pauses in breathing often last 20 to 40 seconds.

On two successive nights for this study, babies were randomly assigned to a rocking or nonrocking group. The infants who were assigned to rocking one night, were non-rocking the next night, and vica versa. Rather than being held and rocked in arms while they slept (an upright position that has been shown in previous studies to also increase normal respiration and decrease SIDS risk) the babies assigned to the rocking group were placed on a rocking mattress while asleep.

When researchers examined results of each group between the two nights, no significant differences were found within groups. All the babies in the rocking group each night had the same basic results, and all the babies in the non-rocking group had the same basic results for both nights. Within groups, there was no significant difference in total sleep time, non-rapid-eye-movement and rapid-eye-movement (REM) sleep, number of arousals (normal and beneficial for babies), the number and duration of central apneas, the frequency of periodic breathing, the level of oxygen saturation (amount of oxygen present in the blood/flowing through the body), and heart rate.

However, between groups, a significant difference was found in the frequency of upper-airway obstructions and apnea. Babies in the rocking group, during both nights, had fewer non-breathing episodes. In seven of eight of the preterm babies, and in nine of the ten full term babies, rocking was associated with a significant decrease in OSA. During rocking, preterm infants fell from a median of 2.5 episodes per hour to 1.8 (P=.034) and full term infants reduced apnea episodes from a median of 1.5 per hour to 0.7 (P=.005).

Researchers concluded that gentle rocking is associated with a significant decrease in the frequency of babies' sleep apnea episodes. This reinforces information we have suggesting peaceful rocking with our infants, and wearing our infants - both activities that increase normal vestibular system function, lead to regulated respiration and decreased episodes of non-breathing - which in turn decrease SIDS risk.

Why Love Matters: How Affection Shapes a Baby's Brain