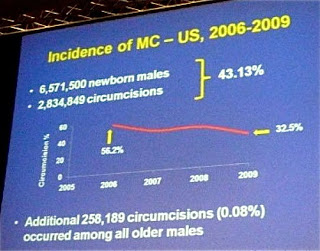 Image (above) from the July 2010 International AIDS Conference in Vienna. This photograph is from the slide presentation by Charbel El Bcheraoui, Ph.D., an epidemic intelligence service officer in the division of HIV/AIDS prevention at the Centers for Disease Control and Prevention, who spoke at the Conference. The slide shows that the circumcision rate for U.S. baby boys dropped from 56.2% in 2006 to 32.5% in 2009.


VIENNA – Circumcision rates for newborn boys in the United States dropped steadily and markedly over the past 4 years, based on the largest review of U.S. rates ever done.

The review, which included more than 6.5 million U.S. newborn boys during the period, also showed that adverse event rates following newborn male circumcision were low, and that the most common adverse events were “mild and easily corrected,” Charbel El Bcheraoui, Ph.D., said at the 18th International AIDS Conference [a conference backed by several pro-cutting groups, and funded with big $ from pro-MGM supporter, Bill Gates, (who also spoke at the conference), and one that Intact America attended in an effort to highlight accurate research pertaining to HIV and circumcision. This research by Bcheraoui, et al. also takes a pro-cutting slant by attempting to demonstrate that genital amputation of newborns is not 'as bad' as previous research has shown it to be. Although they do not come out and say it directly, it seems as though they are suggesting we'd better step up the cutting in the U.S. before we see the extinction of MGM and a rise among babies(?) getting HIV when having careless sex without condoms. Funny... the U.S. already has the highest rate of HIV of any developed nation, and we also have the highest rate of circumcised sexually active men. Circumcision must not be the vaccine for HIV as some have (ridiculously) proposed.]

The dramatic decline in circumcision rates during 2006-2009 continued a trend that began in the United States earlier in the decade, although the fall appeared to accelerate recently, he said. Bcheraoui, an epidemic intelligence service officer in the division of HIV/AIDS prevention at the Centers for Disease Control and Prevention, attributes the circumcision surgery drop to a 1999 statement by the American Academy of Pediatrics that said existing data is not sufficient to recommend newborn male circumcision (Pediatrics 1999;103:686-93). Another factor may be that following the AAP statement, states began to withdraw Medicaid coverage of newborn male circumcision. [Another factor is the increased spread and availability of accurate information available to parents and physicians via awareness raising groups such as Saving Our Sons, the National Organization of Circumcision Information Resource Centers, the Circumcision Information Resource Pages, The Intact Network, Intact America, Peaceful Parenting, the MGM Bill, Medical Professionals for Genital Autonomy, NOHARMM, and similar organizations. In addition, many scholarly books examining circumcision were published in the U.S. in the last several years. When parents are fully informed on all aspects of the purposes of the prepuce, circumcision, and the intact male, they do not elect to amputate this organ from their healthy newborns.]

Dr. El Bcheraoui and his associates said they had no disclosures.

[32% is a good start (I'm still hoping to review the actual data gathered in this study) - it is much better than the previously presumed 50% of boys cut as quoted by the CDC in 2008, but we have a lot of educating left to do. Medical students are still not trained on the prepuce organ, proper intact care, or circumcision implications. 6,571,500 babies circumcised in the United States between 2006-2009 equals just over 1.6 million boys/future men each year who had a healthy, important part of their penis amputated without need - impacting not only them in a variety of detrimental ways, but their future partner(s) as well. Until the U.S. MGM rate matches those of other informed, developed nations (i.e. 99.7% of males remaining intact) then we know there is still a problem in need of our attention.] 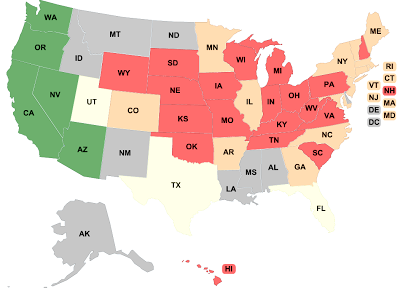 Chart above represents the state-by-state MGM rates for 2008 (previously, the last year available - these rates have decreased in the last 24 months). States in red had the highest percentage of boys cut at birth (~75%), yellow states next (~50%), beige states (~25%), while states in green had the lowest (0-24%). Gray states did not report. 2008 stats were based on all hospital and physician's office surgical records for boys under the age of 1 year as reported to the CDC. Circumcision is classified as cosmetic surgery of an infant.
*View updated states and links at MGMBill.org* 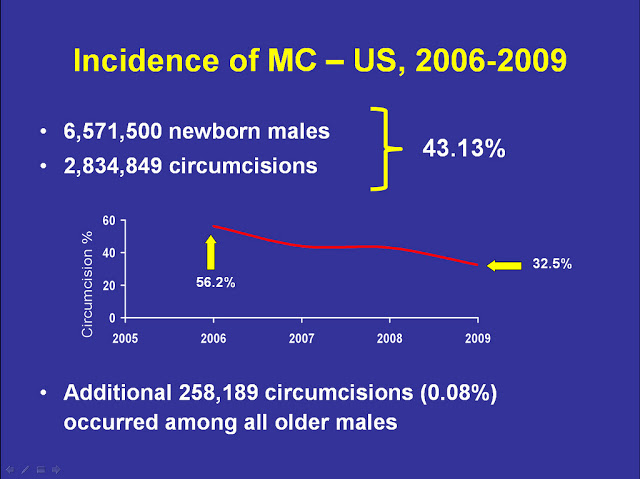