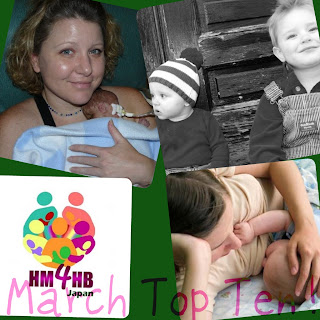 The past few months we've been taking a glance back at the top ten most read items on DrMomma.org that month. This serves to satisfy the curious - what others are reading and passing along - as well as to provide a quick and easy catch-up if you're new around here.

As we move into April (Child Abuse Prevention Month) we pass through Genital Integrity Awareness Week occurring right now (March 28 - April 3), and it seems to be reflected in items being read and shared. Keep speaking up! Planting seeds. Raising awareness. Making a difference - one baby, one child, one parent at a time.


#9 The Day I Withdrew From Nursing School


#8 The Downside to Feeding Your Child Cow's Milk


#4 Human Milk 4 Human Babies After Japan Tsunami
The biggest critiques of this post came pouring into our inbox from artificial baby feed manufacturers in the United States...


#3 Circumcision Gone Wrong: Lantz' Story
Thank you to Brooke for speaking up about mistakes made so that other mothers and their sons do not have to endure the same. You are a hero!


#2 When Doctors Lost All Hope, A Mother's Love and Healing Touch Saves Her Sick Micro Preemie Baby
If you need a really encouraging story - this is it! Cheri describes a few aspects of the powers of a mother's love and devotion to her little baby.


#1 He Didn't Cry: Babies in Shock
The number one most read post during the month of March was initially put up in honor of two little babies subjected to MGM this month. One is the relative of an admin at peaceful parenting - a tiny little nephew born premature to parents who had all the resources in their laps (over $200 worth of journal articles, scholarly books, DVDs, and materials) to become fully informed, and they refused to look at even one item on the subject, electing to cut their baby blindly. After this fresh newborn came into the world premature via c-section, he was saddled with infection and had great difficulty breathing. He was placed on antibiotics and oxygen. He was not held by his own parents for several days, and was then taken from the NICU to have a portion of his small, perfectly formed penis cut off. The other little baby was born at full term and was doing well - nursing and happy in his momma's arms - until he was cut. He endured post-op bleeding after going home from the hospital, and despite his mother's return to the emergency room to inquire about her baby's circumcision wound bleeding, he lost his life to hemorrhage later that evening. Not one baby out there deserves this type of entrance into the world. Let's protect our little ones, recognize that their bodies are perfectly and purposefully made, and love them deeply.