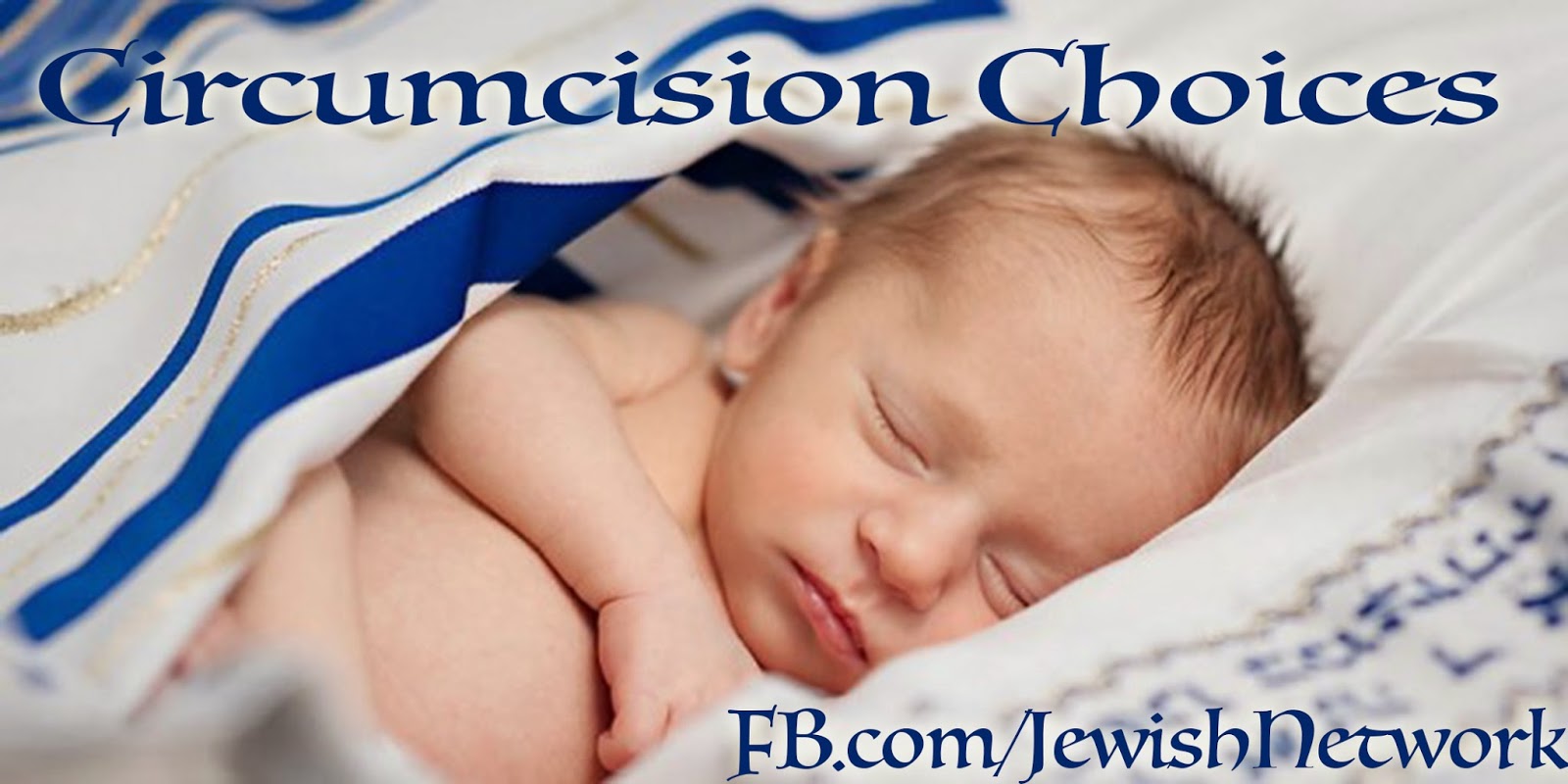 Author's note: I am not trying to convince Orthodox Jews not to circumcise. I am trying to show that circumcision can be done in a much less radical and painful way and still fulfill religious obligations.

About four thousand years ago, the original Jewish circumcision consisted of cutting off only the tip of the foreskin, the floppy part that extends past the glans in the normal male infant. Called milah, the procedure left most of the foreskin alone. Sometimes another procedure, called periah, was performed after milah. Following amputation of the tip, periah consisted of forcibly retracting the infant foreskin. (The infant foreskin does not normally retract [Gairdner, 1949]; four percent of foreskins do not fully retract until age 17 [Øster, 1968].)

Two thousand years ago, Jewish hellenists, wanting to assimilate characteristics of the Greek way of life, obliterated the sign of their "tip" circumcisions. Most of their foreskins were still intact, so they found ways to lengthen them, to make it look as if they had not been circumcised at all. This practice was unacceptable to ancient rabbis, who decided to begin cutting all of the foreskin off in infancy. Babies circumcised in this manner could not possibly later hide the fact that they had been circumcised. Ever since, Jewish boys have endured - and sometimes died from - total foreskin amputation.

Significantly, most rabbis today erroneously refer to total foreskin amputation as milah. Do Orthodox Jews have a choice in how or whether their sons will be circumcised? According to Jewish sources, the history of circumcision indicates that the practice has gone through many changes. Orthodox rabbis have debated as to whether to perform just milah, or to also perform periah. Some considered it essential to have the mohel (ritual circumciser) suck the blood from the boy's penis after the circumcision (Jakobovits, 1959). There have also been debates as to whether circumcision was valid if a metal knife was used instead of fingernails or flint.

Circumcision causes babies intense pain and suffering. Expectant Orthodox Jewish parents may therefore be interested in exploring true brit milah (tip amputation only, as originally performed by Orthodox rabbis). Non-Orthodox parents should be aware of two other options: brit shalom (the naming ceremony) with no circumcision (Bivas N, 1987) or brit with lancing of the foreskin so that one drop of blood is shed. All three options are far safer than total foreskin amputation, which, of course, was invented by mortal rabbis and not by God. 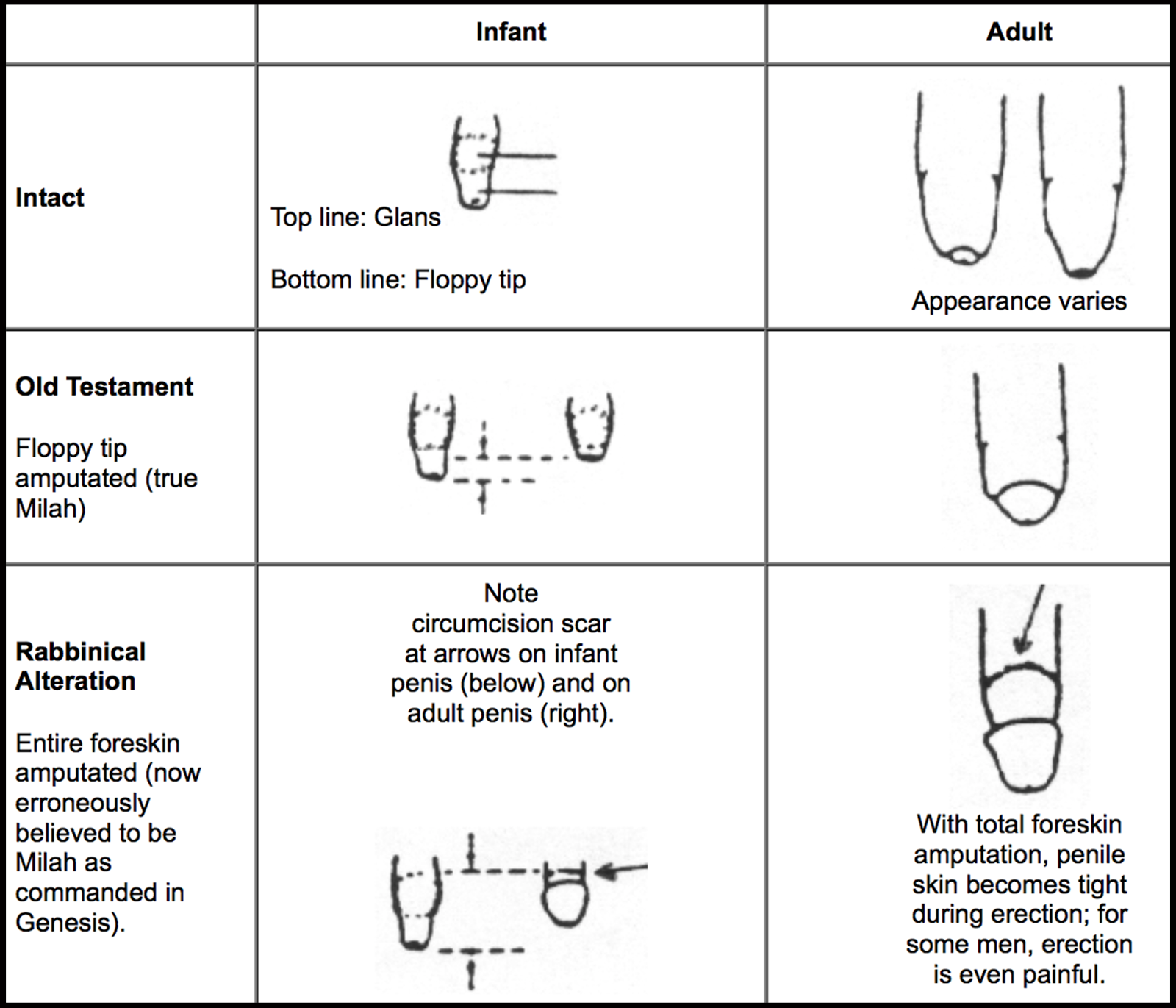 Myth #1: Unmyelinated nerves do not transmit pain, and therefore...

Myth #2: Babies don't feel pain because some of their nerves have not become myelinated (developed) yet.

Myth #4: The baby's intact penis is harder to keep clean and take care of than a circumcised penis.

Myth #6: The American Academy of Pediatrics (AAP) reversed its stand against circumcision.

Myth #7: By age five the foreskin should retract on its own.

Myth #8: It is difficult to teach a boy to keep his intact penis clean.

Myth #9: Male family members will have psychological problems if some have circumcised penises and others have intact penises.

Fact #1: Not only do unmyelinated nerves transmit pain, they actually transmit the most excruciating type of pain. Therefore...

Fact #3: Injecting the anesthetic into the genital area is painful for the baby. Once the anesthetic has taken effect, the baby's screaming from pain during the surgery is only reduced and by no means eliminated. Because the anesthetic wears off soon, the postoperative pain that lasts for days is just as bad for a baby that had anesthetic than for one that had none.

Fact #4: Because of the extra care that one must take in caring for and bathing a circumcision wound that is in the process of healing, and because of the frequent complications such as meatal ulcers that occur in circumcised penises, the intact infant penis is actually much easier to care for. It basically needs no care, no retraction, no nothing.

Fact #6: While the AAP has softened its stand against the surgery, it has not by any means endorsed the surgery.

Fact #7: The normal, spontaneous, and sometimes gradual full retraction may take up to 17 years to complete. Note: under no circumstances should the infant foreskin be retracted, even in a gentle manner. It is simply not necessary.

Fact #8: A girl's genitals are more difficult to keep clean than a boy's intact penis. Boys, like girls, can easily figure out for themselves the details on how to clean their own genitals.

Briggs, A. "Circumcision: What Every Parent Should Know" 1985.