The Sexual Effects of Circumcision

via The National Organization of Circumcision Information Research Centers of Colorado

George C. Denniston, M.D., MPH, commented, "This new study provided further evidence of the permanent and irreversible lifelong injury of non-therapeutic neonatal circumcision and raises grave ethical questions regarding the continued performance of child circumcision. We call upon the American Academy of Pediatrics to defend children from this practice."

This chart shows the difference in sensitivity between a circumcised penis and an intact (uncircumcised) one. The most sensitive parts of the intact penis are missing from the circumcised penis. Visit Circumstitions for more information about this new study. 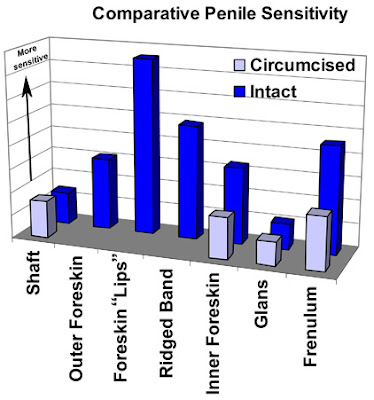 A change to how the penis works


Circumcision removes one-third to one-half of the penile skin system. This drastically alters the normal functioning of the penis and causes problems for both men and their partners. Male circumcision reduces pleasure for men and increases vaginal friction and discomfort for women.

The skin of the penis is not attached to the erectile bodies inside the shaft; it is only connected to the underlying structures at either end of the penis: at the pelvis and at the base of the glans. This means that the longer skin of an intact (uncircumcised) penis can freely move back and forth along the penile shaft during intercourse. The skin of a circumcised penis lacks the required length, and is usually stretched taught when the penis is erect. This radically alters the normal function of the penile skin system.

The 'gliding action' allowed by the foreskin's length is the hallmark mechanical feature of the natural human penis. The non-abrasive gliding of the penis in and out of its own sheath of skin facilitates smooth, comfortable, and pleasurable intercourse for both partners. The gliding action stimulates the penis and provides a lubricating effect for intercourse.

Circumcision destroys this by removing so much skin that the remaining skin on the erect penis is stretched tight and no longer mobile. Circumcised men don't experience the wonderful sensation of the highly erogenous foreskin rolling back and forth across the glans, and the man's partner loses out on the natural lubricating effect the foreskin provides.

See the anatomy page at cirp.org for diagrams of how the foreskin works during intercourse. 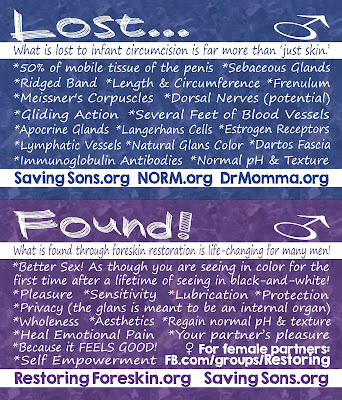 A change to how intercourse works

During intercourse with an intact penis, the vaginal walls grip the outer penile skin, and the penis slides back and forth inside its own skin. This causes very little friction against the vaginal walls. This motion is smooth and effortless and creates a very pleasurable sensation for both the man and the woman. Women who have had intercourse with an intact man describe a sensation of being perfectly and seamlessly connected to their partner.

During intercourse with a circumcised penis, the skin on the penile shaft rubs back and forth against the vaginal walls, and this is often the cause of sexual discomfort for women. Many women whose partners are circumcised need artificial lubrication to reduce friction and discomfort, but for women who have intact partners, artificial lubrication is unnecessary. Because few women in America have experienced intercourse with a natural penis, most don't understand that circumcision is a major cause of uncomfortable vaginal friction.

Studies have shown that women who have intact partners have greater levels of sexual satisfaction than women who have circumcised partners. They also have greater success reaching orgasm through intercourse. A recent survey showed that of American women who had experienced both kinds of intercourse, 89% preferred intercourse with an intact penis. These women also reported improved success at achieving orgasm through intercourse with an intact penis. Also see what Dr. Dean Edell had to say on this subject. 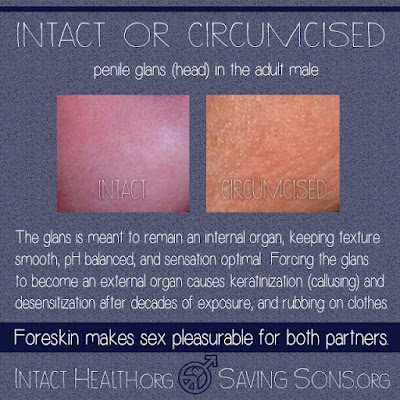 See Also: Intact or Circumcised: A Significant Difference in the Adult Penis

Loss of erogenous tissue and sensation

Men also experience many detrimental physical and sexual changes because of circumcision. The most serious change for men is a significant reduction in sexual pleasure. The foreskin, which is removed during circumcision, contains many thousands of erogenous nerve endings. Approximately half of a man's capacity for pleasure is cut away by circumcision. These nerves are cut away by both infant and adult circumcision.

Men who were circumcised at birth are never able to experience the sensations these nerves provide, and so don't know that they are only feeling about half of the pleasure that an intact penis provides. Some circumcised men claim that they have all the sensation they could want, but that is like a color-blind man convincing himself that there is no such thing as color vision and that he can see perfectly with his eyes just as they are.


A change to a man's sexual response

Physiologically, a man's brain expects stimulation from both the foreskin and the glans to achieve a healthy sexual response. Circumcised men lack the nerve inputs from the foreskin, and additionally, the stimulation from the glans is unnatural, because the glans of the circumcised penis is exposed and therefore stimulated directly (the glans of an intact man is stimulated indirectly). These physical and sensory changes caused by circumcision often result in problems with the male sexual response. Studies show that circumcised men have a much higher likelihood of experiencing problems such as premature ejaculation and delayed ejaculation.

A growing number of circumcised men are choosing to restore their foreskins through a gentle stretching process similar to how new skin is grown for burn victims. Men who have restored their foreskin report improved sexual response, a more natural stimulation of the glans, and improved satisfaction for their partners. Visit the National Organization of Restoring Men website at www.norm.org to learn more about what can be done to reverse the damaging effects of circumcision. 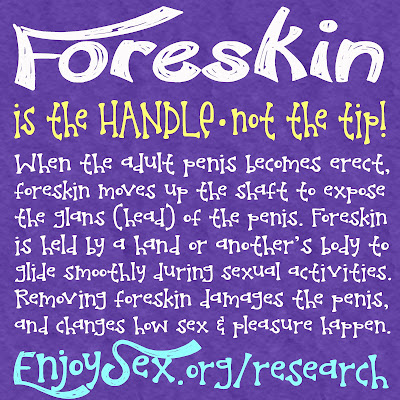 Vinyl stickers/mini cards for education and awareness raising at Etsy.

See also the 2004 article by Dr. Christine Northrup, How Male Circumcision May Be Affecting Your Love Life 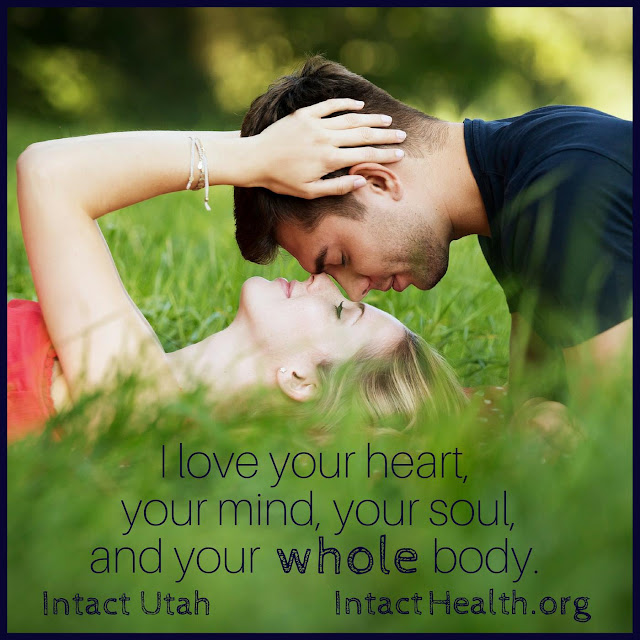