Don't Force Your Child to Sit on Santa's Lap

By Brianne Collecchio
Originally at ChildUp.com 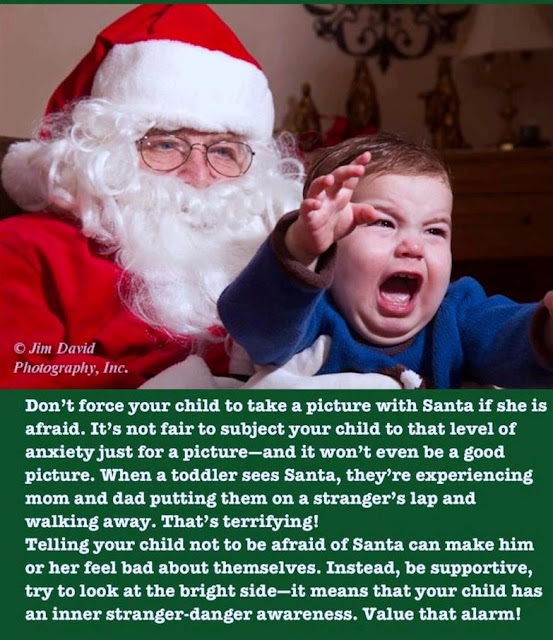 Graphic by On the Fence Advocacy

Your Christmas tree is decorated, the lights are up, and you’ve started to tackle your list of Christmas gifts. It’s time to take the children to the mall to see Santa. In your mind you’ve envisioned adorable photos of a smiling child posing happily with Old Saint Nick. You’ve thought about how many copies you’ll need to send out to proud grandparents. Your child is excited to see the man in red, already compiling a huge catalogue of toys to ask for. But when your child gets to the front of the line and comes face to face with Santa, he’s terrified! There’s no way he’s going to get anywhere near the man, let alone sit on his lap.

A child can develop a fear of Santa or other costumed characters at any point in childhood. Maybe your daughter loved Santa for the first three years of her life, and all of a sudden just the mention of his name has her running to her room. Children have extremely short memories, so each year when Christmas rolls around it’s like they are discovering Santa for the first time.

There are many reasons why children might be afraid of Santa. He has a big white beard that covers most of his face, and when a young child sits on his lap sometimes all they can see is that great white beard. It can be pretty intimidating not to be able to see his face.

A lot of children experience separation anxiety. When a parent sees Santa, they think of a jolly old man who brings children presents. When a toddler sees Santa, they’re experiencing mom and dad putting them on a stranger’s lap and walking away. That’s terrifying!

A toddler’s mind is also growing and developing so quickly—especially their imaginations. They are learning so much about the world so fast, but they still do not have the ability to distinguish between fantasy and reality. To that child Santa is a large stranger with a booming voice, and they are being left with him. That’s pretty intense.

Don’t force your child to take a picture with Santa or meet him if he or she is too afraid—just wait until next year. It’s not fair to subject your child to that level of anxiety just for a picture—and it won’t even be a good picture. Forcing your child to meet Santa can cause your child to associate that panic, fear, or discomfort with all things holiday related, and the last thing you want is a child who has a panic attack every time they hear Jingle Bells.

Telling your child not to be afraid of Santa can make him or her feel bad about themselves. Instead, be supportive. Let your child know that nothing bad will happen to him or her and that you will be right there with them. Offer to go see Santa first or have your picture taken with him to show your child that they will be fine.

Try to recognize if your child is truly afraid, or is just shy. Stay out of the line and watch some of the other children go first and hear their interactions. It’s very possible that they will see the other children enjoying themselves and change their mind.

If your child will absolutely not go anywhere near Santa, try to look at the bright side—it means that your child has an inner stranger-danger awareness. Value that alarm! There are far worse things in life than a child who is afraid to sit on Santa’s lap. Maybe you won’t get that adorable photo to send the grandparents, but you won’t get one of your child screaming either. Take it slow. There’s always next year.