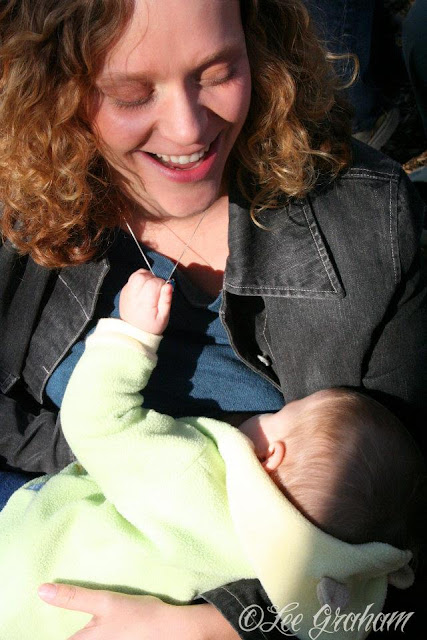 Lisa and her little one, who shares her milk.

Let’s talk about that controversial thing called milksharing. The facts, as I understand them, are that Emma Kwasnica, with the help of many other like-minded people, launched a global network, through Facebook, called Human Milk 4 Human Babies. The aim of the network is to connect moms who need milk for their babies, with other moms, who have milk that they can share. This was about meeting a need.

The World Health Organization’s position on infant feeding is that if, for some reason, a mother is not able to feed her own baby, milk from another human mother is a better alternative than formula. Milk banks do exist that could theoretically meet this need, but there are some problems. First, there are very few of them, so the milk that they do have to give gets prioritized to very sick or premature babies - the infants that desperately need the milk. Second, milk bank milk is almost always pasteurized, which turns human milk from the living miraculous stuff that it is, into dead milk, losing much of its value. Finally, it costs money to access the milk of many milk banks. So even if your baby is among the few that make the cut, and you are happy to accept pasteurized milk, you may still have to come up with the cash to cover it.

The medical community is aware of how difficult it is to access human milk when you need it -- this is why they do not often advise mothers to try this option. Instead, supplementing with formula is quickly suggested. I do not intend to go into why this is such a poor choice here. Suffice it to say there are mothers out there for whom supplementing with formula is not an option that they are comfortable with. So, do they have to? Is there no other choice?

Let’s be realistic: human milk is not a scarcity! Many mothers have ample supply for their babies, and then some. Some women struggle with oversupply! It is also a vastly renewable resource - empty breasts will fill themselves again and again. It should not be so hard to connect people who need milk to people who have milk to give. And it turns out, it isn't. But fear is alive and well.

When a group of parents decided they were done waiting for the medical community to fix this problem, and opened up a way for donors and recipients to easily match up, there was massive push back. It must not be safe, right? People could have disease! You never know what they might be smoking in their spare time... That's just gross, anyway.

Really, all of the arguments against this wonderful, simple milksharing solution to a common problem sound the same to me as razor blades in apples at Halloween. I doubt that there are all kinds of sadistic, lactating weirdos out there, masquerading as concerned moms, handing out drug-laced human milk donations just for jollies.

Here are a few facts:

Human Milk 4 Human Babies donors do not charge for their milk. There is nothing to be gained by donation, save the truly awesome global village feeling that you are helping to feed another's child.

Milksharing is done person to person. That means you meet that person you are getting milk from. You ask questions. You go to their house and meet their family. And you decide whether or not your baby eats that milk. You decide.

This is not a new idea. Wet nursing has been done throughout human history.

And, now a confession: My name is Lisa, and I have donated my milk to a stranger.

Based on the oh-so-educated comments that I read elsewhere on the internet, a common reaction to this is, “Omigosh! Weirdo!” or maybe just, “Yuck. I could never do that.”

But before you decide how you feel about informal milksharing, read just a teensy bit more.

I say I gave my milk to a stranger, in that this was someone that I initially met over the Internet. But when she sat in my living room, with her husband and new son, and we chatted while my similar-aged daughter cooed in her swing nearby, stranger was not the word I would have used to describe her. It actually didn’t feel strange at all. We were just two moms. She had a problem, and I was in a position to help her out, in a meaningful way. I am so glad she was not too scared to accept my help. Donating milk was hugely rewarding for me, even renewing much of my faith in the spirit of community.

If only more moms were not scared milk-less. We don't always need to turn to the authorities to fix our problems. Sometimes, with a little courage, we can find our own solutions. 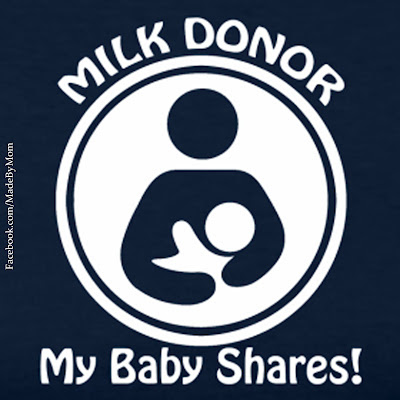 Made By Momma Milksharing Tee


Lisa is Mom to two, wife to one, and lives in Winnipeg, Manitoba, Canada. She loves being busy in her local, gentle parenting community, and blogs occasionally at Swirls and Swings. This article is part of World Milksharing Week's Blog Carnival hosted by Trevor MacDonald at Milk Junkies. Visit the World Milksharing Week website or find WMW on Facebook to learn more.

Breastmilk Donation Page [This page was created prior to milksharing communities existing as they do in 2012. For many years peaceful parenting served, in part, to connect mothers with donors locally via email, phone and community networking. Today, thanks to the new mother-to-mother milksharing set-ups, we hear from far fewer who don't already have their needs met or connections established.]

Joshua's Story: Why I Choose Another Mother's Milk

Joshua's Story: Why I Still Choose Another Mother's Milk

From Despair to Donation: A Mother Loses Her Baby and Shares His Milk

If you would like to share your milksharing story or research on the subject, write to DrMomma.org@gmail.com