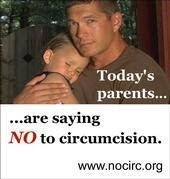 This is the new article Oprah.com posted on circumcision. As of yet, Oprah has not presented this as a topic on her show. Hopefully, she (and her staff) choose to do so soon, and invite guest speakers who are very well versed in the research on the prepuce and circumcision. With her power of influence, it is almost certain rates of genital cutting in the United States would fall from the current 50% to a much lesser degree. It is with education, accurate and complete information, and awareness that positive change is made. Speak up, everyone! :)

In the meantime, if you feel like leaving your 2-cents on Oprah.com see the original link here and comment. It is a highly read blog site and every intelligent comment might just be what a new-parent-to-be needs to hear. Feel free to link studies from this site, or anywhere else that you felt helpful. (To list websites on Oprah.com, you may need to eliminate the "http://" from the start of the web address and simply start with "www.")

The First Cut Is the Deepest—What About Circumcision?
By Fritz Lenneman

What do you usually talk about on a first date? On ours, which was nine years ago, my wife and I discussed—among many other things—circumcision. I had just been reading about the anti-circumcision movement. I can't tell you much about that article now, but I will never forget one particular anecdote.

There is a group of men who not only oppose the practice, but are committed to trying to reclaim their "lost" foreskin. How did they do this? A long, painful procedure that involves very small weights. Yes, I actually mentioned this on our first date. And yes, she went out with me again. In fact, both of us wholeheartedly agreed not to circumcise our sons. At the time, neither of us knew the sons we were talking about would be ours.

Just about all parents of newborn boys will be asked if they want their sons circumcised. It has long been the most common surgical operation in the United States, but it's not necessarily a given anymore. While exact historical rates of circumcision are nearly impossible to determine, about 80 percent of American boys born in the two generations after World War II had the procedure. According to the National Hospital Discharge Survey, that number dropped to 56 percent of boys born in 2006.

The decrease in the percentage of boys getting circumcised has been linked to several causes, including first-generation children born to immigrants whose cultures don't perform the surgery. Another reason could be that, in 1971, the American Academy of Pediatrics published its guidelines for newborn care with the position that there was no medical reason to recommend circumcision.

Followers of two of the world's major religions routinely circumcise their sons. Jewish parents do it eight days after birth because it's one of the central pillars of their relationship with God. While not ordered by the Koran—which does not specifically mention the procedure, nor at what age it should happen—Muslims circumcise their sons as well, usually before a boy turns 7 years old. Yet these worshipers, who together add up to about 3 percent of the U.S. population, do not account for the high rate of circumcision in America.

Nonreligious circumcision tends to be a particularly American procedure. A 2007 World Health Organization survey shows circumcision is performed on less than 20 percent of boys in most of Europe.

In the United Kingdom, the older a man is, the more likely he is to be circumcised. The National Health Service no longer pays for routine circumcision, and some estimate that the current rate for newborn circumcision in that country is just 1 percent. In the mid-20th century, Australian boys were as likely to be circumcised as Americans. But in recent decades, those have dropped to European levels—about 10 percent.

Dr. Kellogg believed circumcision—especially when performed without anesthetic—would create a link in the patient's mind between sex and pain and would make sex less pleasurable and abstinence easier. The anti-circumcision group Circumcision Resource Center agrees that circumcision reduces sexual feeling. They summarize a 2007 study published in the British Journal of Urology International, saying: "Five locations on the uncircumcised penis that are routinely removed at circumcision are significantly more sensitive than the most sensitive location on the circumcised penis."

Some of the more current medical literature calls for circumcision to prevent phimosis, when the foreskin tightens and will not retract. It's a relatively common condition in prepubescent boys, but occurs in only in about 1 percent of men over the age of 18. It's true that circumcision prevents phimosis, but there are often other treatments available before circumcision becomes necessary. The British Medical Association's guidelines say, "To circumcise for therapeutic reasons where medical research has shown other techniques to be at least as effective and less invasive would be unethical and inappropriate."

Circumcision is also said to prevent penile cancer. However, the American Cancer Society discounts the link between intact foreskin and cancer. According to their website, Cancer.org, "Most researchers now believe those studies [that showed a link] were flawed because they failed to consider other risk factors, such as smoking, personal hygiene and the number of sexual partners. … Most experts agree that circumcision should not be recommended as a way to prevent penile cancer."

Dr. Colm O'Mahony, a sexual health expert in Chester, England, told the British Broadcasting Corporation that he was not convinced by the information he had seen. "It suggests that it is women who infect innocent men—let's protect the innocent men," he said. "And it allows men who don't want to change their irresponsible behavior to continue to sleep around and not even use a condom."

However, the prospect of curbing the spread of HIV and AIDS—as well as other diseases like infant urinary tract infections—lead some to think the American medical community could begin promoting preventive circumcision again. Dr. Michael Brady, a consultant to the American Academy of Pediatrics, told The New York Times, "We do have evidence to suggest there are health benefits, and families should be given an opportunity to know what they are."

In 1989, the famous pediatrician and author Dr. Benjamin Spock wrote about circumcision for Redbook magazine. "In the 1940s, I favored circumcision performed within a few days of birth," he wrote. "My own preference, if I had the good fortune to have another son, would be to leave his little penis alone."

Are you convinced of the arguments for circumcision? Do you think opponents make their case? Leave your opinion in the comments section below.