Editor's preface: Our one qualm with this article is that it (once again) presents human milk as "best" - as "above the grade" - compared to artificial feeding, when actually breastfeeding is the only normal way to achieve a baseline level of health for a human baby. Anything else is sub-par. The article would be best re-titled, "Artificially fed babies do not get the kick-start to their immune system that normally fed babies do." And instead of "researchers hoping to gain" by improving artificial feeding liquids, why don't we stress the importance of what we are discovering to be true about mother's milk (there is no possible artificial substitute) and pour our resources, time, energy, and money into making sure all mothers, and all human babies, have easy access to human milk. [Breastmilk donation options.] 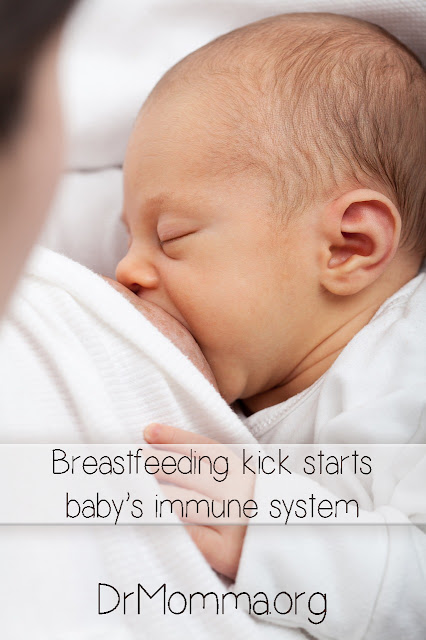 Human milk best because it kick-starts babies' immune system
Breastfed babies are better at fighting off infection than bottle-fed infants because their mothers milk kick-starts their immune system, scientists have discovered.

Now researchers have found that human milk activates the body’s natural defenses in a way that formula cannot. Breastmilk triggers a reaction in the gut which helps to defeat infection. It had long been known that breastfed babies have a lower risk of developing a range of illnesses. Breastfeeding has been linked with fewer chest infections, ear infections and general sickness. In the long-term it is thought breastfed babies are less likely to be overweight, have high blood pressure, or develop eczema or asthma.

Women are recommended to breastfeed exclusively for at least the first six months of their child's life.

Some researchers hope that the breakthrough in understanding could lead to the development of infant formula that will give a boost to the immune system as mother's milk does.

The team found that breastmilk triggers changes in the gut linked to genes.

Sharon Donovan, a professor of nutrition in the University of Illinois, who carried out the research, said, "For the first time, we can see that breastmilk induces genetic pathways that are quite different from those in formula-fed infants. The intestinal tract of the newborn undergoes marked changes in response to feeding. And the response to human milk far exceeds that of formula, suggesting that the active components in breastmilk are important in this response.”

She added that while experts had known for decades of the importance of breastfeeding babies, "what we haven't known is how breastmilk protects the infant and particularly how it regulates the development of the intestine."

[80% of the immune system is housed in the human gut.]

Dr. Donovan also would like to learn how bacteria in the gut differ in formula and breastfed babies and this technique should make that possible. She said, "Now we'll be able to get a complete picture of what's happening in an infant – from the composition of the diet to the microbes in the gut and the genes that are activated along the way."

The study examined the effect of feeding on 22 healthy infants, 12 breastfed and 10 formula fed. The technique involved isolating intestinal cells shed in the infants' stools, then comparing the stimulation of different genes between the two groups. The study was published in the latest issue of the American Journal of Physiology, Gastrointestinal and Liver Physiology.