Are YOU Paying for Infant Circumcision?

According to the American Academy of Pediatrics, routine infant circumcision (RIC) surgery alone costs taxpayers close to $70 million annually. Costs are much greater when payments for post-op complications and extended hospital stays are included in the circumcision surgery figures. (1)

The Centers for Medicare and Medicaid Services (federal program) has defined elective circumcision (ICD-9-CM V50.2) as medically unnecessary - the amputation of the prepuce organ is therefore a cosmetic, irreversible, surgical body modification. And it is one that is being done to infant boys with your tax dollars in 33 U.S. states and among TRICARE covered military families.

A study (2009) published in the American Journal of Public Health demonstrates that infant circumcision declines in those areas where Medicaid no longer covers the surgery (graph below). (2) As a result, many human rights activists believe that the key to granting all boys and men their right to bodily integrity lies in a nation wide end to Medicaid funding of RIC. 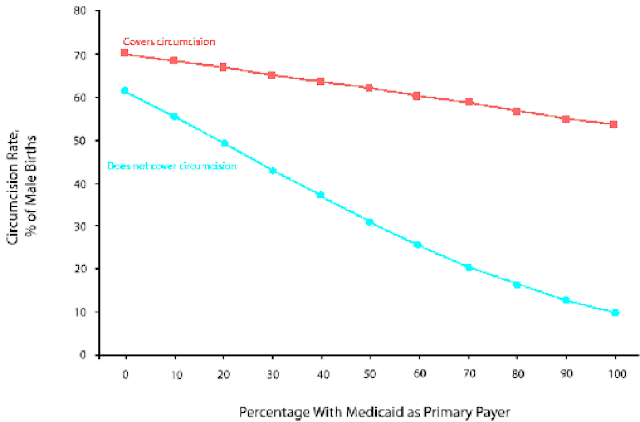 Members of GI: Genital Integrity for Military Families Abroad are equally concerned with ending TRICARE's coverage of RIC for babies born to military personnel both in the States and abroad. In the Netherlands, where several GI volunteers work, the national medical society, KNMG, takes a firm stance against infant circumcision:


The official viewpoint of KNMG and other related medical/scientific organisations is that non-therapeutic circumcision of male minors is a violation of children’s rights to autonomy and physical integrity. Contrary to popular belief, circumcision can cause complications – bleeding, infection, urethral stricture and panic attacks are particularly common. KNMG is therefore urging a strong policy of deterrence. KNMG is calling upon doctors to actively and insistently inform parents who are considering the procedure of the absence of medical benefits and the danger of complications.

* Infant circumcision is not recommended by the American Academy of Pediatrics (3) or any national medical organization in the world.
* Circumcision is considered medically unnecessary by all major medical organizations.
* Circumcision does not contribute to health, and deters from health.
* Nearly 70% of American parents do not want their boys (or their girls) circumcised.
* Routine circumcision of newborns has been abandoned in all English-speaking countries. (It has never been customary in most of the world.)
* According to comprehensive analysis, infant circumcision is not cost-effective. (4)
* Those choosing circumcision for themselves may pay privately if they desire as consenting adults.
* Medicaid savings will average $1 million annually for each State.
* Medically necessary programs need this money. 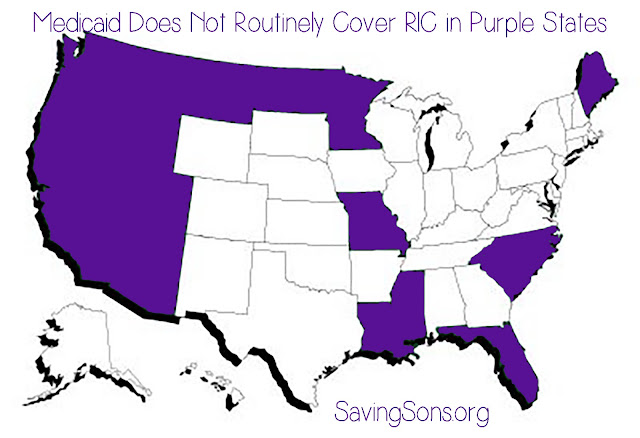 Currently, Medicaid does not cover infant circumcision in the following 18 states. Each state is listed according to the year in which tax payer funding of RIC ended in the state. 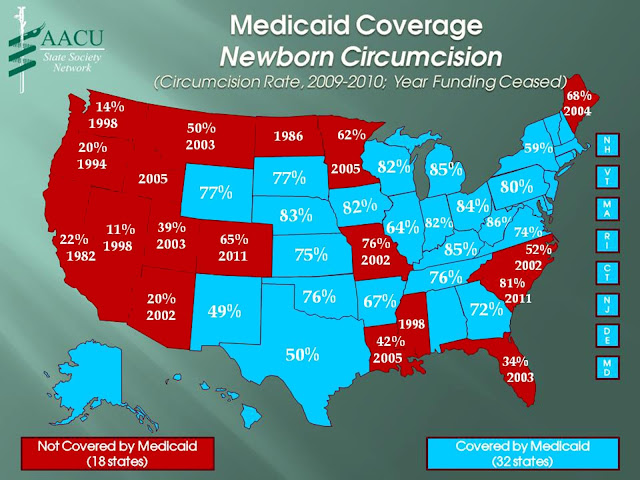 For further information and to become involved see: