Foreskin and its 16+ Functions 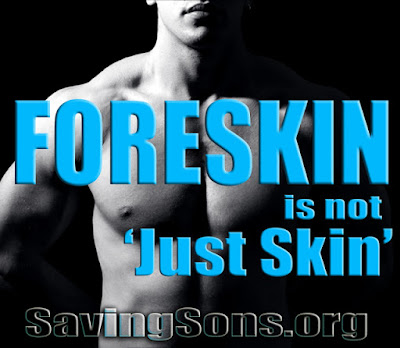 The foreskin is an organ present on all mammals from birth (male and female, human and other mammals). It serves many important purposes, and is not 'just skin.' When the foreskin is lost to infant circumcision, there are at least 16 important functions that are lost, and likely more that we have yet to fully understand.

The frenar band is a group of soft ridges near the junction of the inner and outer foreskin. This region is the primary erogenous zone of the intact male body. Loss of this delicate belt of densely innervated, sexually responsive tissue reduces the fullness and intensity of sexual response. [Source: Taylor, J. R. et al., "The Prepuce: Specialized Mucosa of the Penis and Its Loss to Circumcision," British Journal of Urology 77 (1996): 291-295.]

The foreskin's gliding action is a hallmark feature of the normal, natural, intact penis. This non-abrasive gliding of the penis in and out of its own shaft skin facilitates smooth, comfortable, pleasurable intercourse for both partners. Without this gliding action, the corona of the circumcised penis can function as a one-way valve, making artificial lubricants necessary for comfortable intercourse. [Source: P. M. Fleiss, MD, MPH, "The Case Against Circumcision," Mothering: The Magazine of Natural Family Living (Winter 1997): 36-45.]

Circumcision removes the most important sensory component of the foreskin - thousands of coiled fine-touch receptors called Meissner's corpuscles. Also lost are branches of the dorsal nerve, and 20,000+ specialized erotogenic nerve endings of several types. Together these detect subtle changes in motion and temperature, as well as fine gradations in texture. [Sources: 1. R. K. Winkelmann, "The Erogenous Zones: Their Nerve Supply and Its Significance," Proceedings of the Staff Meetings of the Mayo Clinic 34 (1959): 39-47. 2. R. K. Winkelmann, "The Cutaneous Innervation of Human Newborn Prepuce," Journal of Investigative Dermatology 26 (1956): 53-67.]

The frenulum is a highly erogenous V-shaped structure on the underside of the glans that tethers the foreskin. During circumcision it is frequently either amputated with the foreskin or severed, which destroys or diminishes its sexual and physiological functions. [Sources: 1. Cold, C, Taylor, J, "The Prepuce," BJU International 83, Suppl. 1, (1999): 34-44. 2. Kaplan, G.W., "Complications of Circumcision," Urologic Clinics of North America 10, 1983.]

Circumcision removes approximately half of this temperature-sensitive smooth muscle sheath, which lies between the outer layer of skin and the corpus cavernosa. [Source: Netter, F.H., "Atlas of Human Anatomy," Second Edition (Novartis, 1997): Plates 234, 329, 338, 354, 355.]

Components of the Immune System

The soft mucosa (inner foreskin) contains its own immunological defense system which produces plasma cells. These cells secrete immunoglobulin antibodies as well as antibacterial and antiviral proteins, including the pathogen killing enzyme lysozyme. [Sources: 1. A. Ahmed and A. W. Jones, "Apocrine Cystadenoma: A Report of Two Cases Occurring on the Prepuce," British Journal of Dermatology 81 (1969): 899-901. 2. P. J. Flower et al., "An Immunopathologic Study of the Bovine Prepuce," Veterinary Pathology 20 (1983):189-202.]

The loss of these vessels due to circumcision reduces the lymph flow within that part of the body's immune system. [Source: Netter, F.H., "Atlas of Human Anatomy," Second Edition (Novartis, 1997): plate 379.]

The presence of estrogen receptors within the foreskin has only recently been discovered. Their purpose is not yet understood and needs further study. [Source: R. Hausmann et al., "The Forensic Value of the Immunohistochemical Detection of Oestrogen Receptors in Vaginal Epithelium," International Journal of Legal Medicine 109 (1996): 10-30.]

These glands of the inner foreskin produce pheromones - nature's powerful, silent, invisible behavioral signals to potential sexual partners. The effect of their absence on human sexuality has never been studied. [Source: A. Ahmed and A. W. Jones, "Apocrine Cystadenoma: A Report of Two Cases Occurring on the Prepuce," British Journal of Dermatology 81 (1969): 899-901.]

The sebaceous glands may lubricate and moisturize the foreskin and glans, which is normally a protected internal organ. Not all men have sebaceous glands on their inner foreskin. [Source: A. B. Hyman and M. H. Brownstein, "Tyson's Glands: Ectopic Sebaceous Glands and Papillomatosis Penis," Archives of Dermatology 99 (1969): 31-37.]

These specialized epithelial cells are a component of the immune system in the penis. [Source: G. N. Weiss et al., "The Distribution and Density of Langerhans Cells in the Human Prepuce: Site of a Diminished Immune Response?" Israel Journal of Medical Sciences 29 (1993): 42-43.]

The natural coloration of the glans and inner foreskin (usually hidden and only visible to others when sexually aroused) is considerably more intense than the permanently exposed and keratinized coloration of a circumcised penis. The socio-biological function of this visual stimulus has never been studied. The glans ranges from pink to red to dark purple among intact men with light skin tone, and from pinkish to mahagony to dark brown among men with dark skin tone. If circumcision is performed on an infant or young boy, the connective tissue which protectively fuses the foreskin and glans together is ripped apart. This leaves the glans raw and subject to infection, scarring, pitting, shrinkage, and eventual discoloration. Over a period of years the glans becomes keratinized, adding additional layers of tissue in order to adequately protect itself, which further contributes to discoloration. Many restoring men report dramatic changes in glans color and appearance, and that these changes closely mirror the natural coloration and smooth, glossy appearance of the glans seen in intact men. [Source: P. M. Fleiss, MD, MPH, "The Case Against Circumcision," Mothering: The Magazine of Natural Family Living (Winter 1997): 36-45.]

Circumcision removes some of the length and girth of the penis - its double-layered wrapping of loose, and usually longer, tissue is removed. A circumcised penis is truncated and thinner than it would have been if left intact. [Source: R. D. Talarico and J. E. Jasaitis, "Concealed Penis: A Complication of Neonatal Circumcision," Journal of Urology 110 (1973): 732-733.]

Several feet of blood vessels, including the frenular artery and branches of the dorsal artery, are removed in circumcision. The loss of this rich vascularization interrupts normal blood flow to the shaft and glans of the penis, damaging the natural function of the penis and altering its development. [Sources: 1. H. C. Bazett et al., "Depth, Distribution and Probable Identification in the Prepuce of Sensory End-Organs Concerned in Sensations of Temperature and Touch; Thermometric Conductivity," Archives of Neurology and Psychiatry 27 (1932): 489-517. 2. Netter, F.H., "Atlas of Human Anatomy," Second Edition (Novartis, 1997): plates 238, 239.]

The terminal branch of the pudendal nerve connects to the skin of the penis, the prepuce, the corpora cavernosa, and the glans. Destruction of these nerves is a rare but devastating complication of circumcision. If cut during circumcision, the top two-thirds of the penis will be almost completely without sensation. [Sources: 1. Agur, A.M.R. ed., "Grant's Atlas of Anatomy," Ninth Edition (Williams and Wilkins, 1991): 188-190. 2. Netter, F.H., "Atlas of Human Anatomy," Second Edition (Novartis, 1997): plate 380, 387.]

Circumcision performed during infancy disrupts the bonding process between child and mother. There are indications that the innate sense of trust in intimate human contact is inhibited or lost. It can also have significant adverse effects on neurological development and cause a host of problems with breastfeeding and attachment development.

Additionally, an infant's self-confidence and hardiness is diminished by forcing the newborn victim into a defensive psychological state of "learned helplessness" or "acquired passivity" to cope with the excruciating pain which he can neither fight nor flee.

The trauma of this early pain lowers a circumcised boy's pain threshold below that of intact boys and girls. This has been proven in a study during vaccination time. [Sources: 1. R. Goldman, Circumcision: The Hidden Trauma (Boston: Vanguard Publications, 1997), 139-175. 2. A. Taddio et al., "Effect of Neonatal Circumcision on Pain Responses during Vaccination in Boys," Lancet 345 (1995): 291-292.]

Every year some boys lose their entire penises from circumcision accidents and infections. They are then "sexually reassigned" by castration and transgender surgery, and are expected to live their lives as females. [Sources: 1. J. P. Gearhart and J. A. Rock, "Total Ablation of the Penis after Circumcision with Electrocautery: A Method of Management and Long-Term Followup," Journal of Urology 142 (1989):799-801. 2. M. Diamond and H. K. Sigmundson, "Sex Reassignment at Birth: Long-Term Review and Clinical Implications," Archives of Pediatrics and Adolescent Medicine 151 (1997): 298-304.]

Every year many boys in the United States and elsewhere lose their lives as a result of circumcision - a fact that is routinely ignored or obscured. More U.S. born boys in the neonatal period of infancy die as the result of circumcision complications than from SIDS, car accidents, crib accidents, suffocation or choking. [Sources: 1. G. W. Kaplan, "Complications of Circumcision," Urologic Clinics of North America 10 (1983): 543-549. 2. R. S. Thompson, "Routine Circumcision in the Newborn: An Opposing View," Journal of Family Practice 31 (1990): 189-196.

The human foreskin represents 1/3 to 1/2 the complete penis at birth and in early childhood, and plays an important part in normal sexual functioning in adulthood. 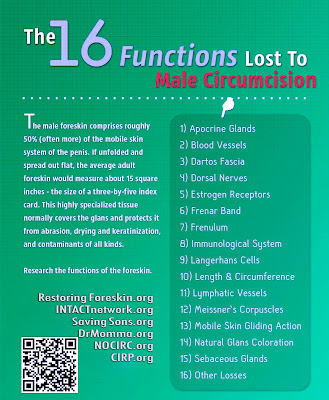 Functions of the Foreskin by Drs. Fleiss and Hodges: http://www.rMomma.org/2009/09/functions-of-foreskin-purposes-of.html 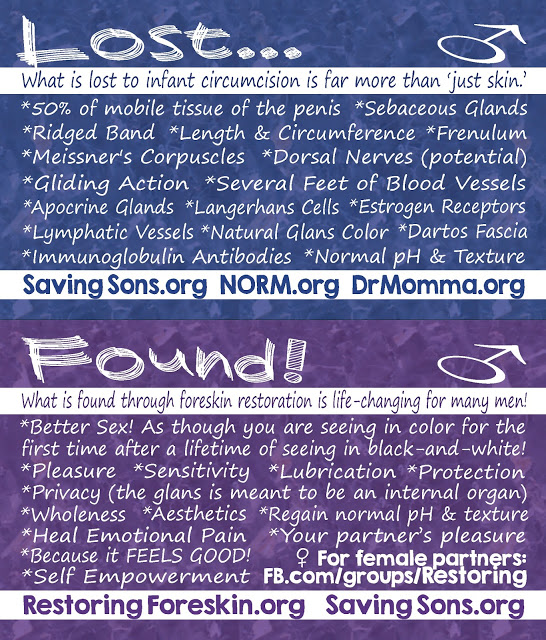 Professional cards and vinyl stickers available for sharing at Etsy. 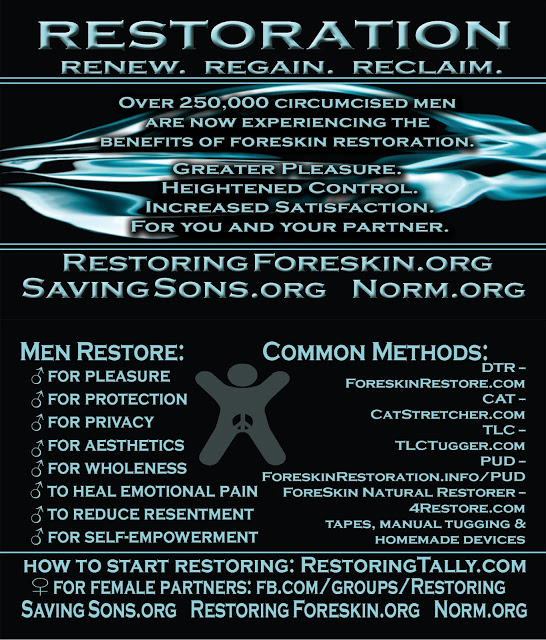 An added message for physicians: 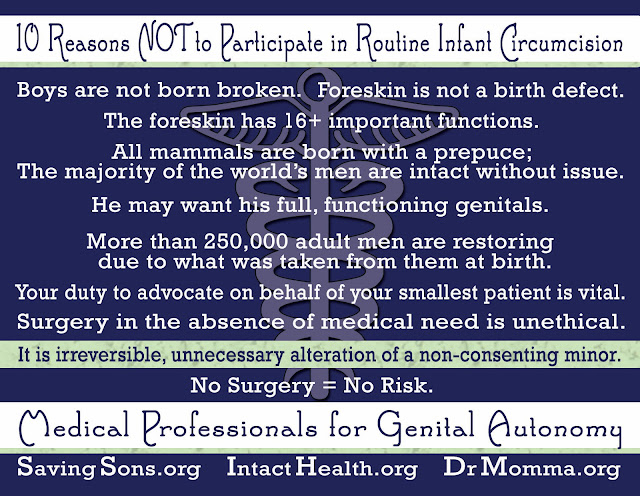 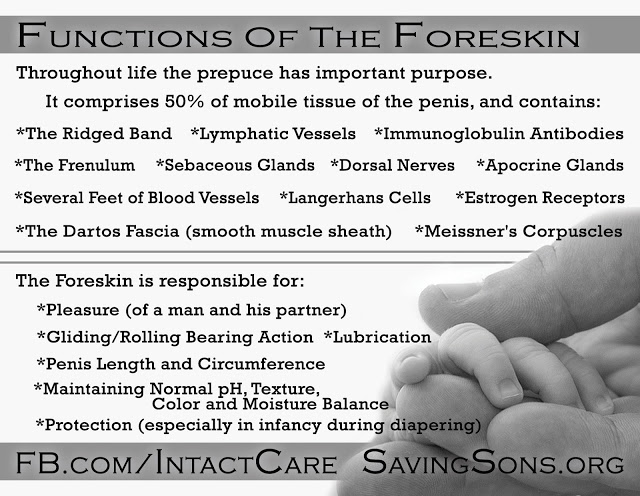 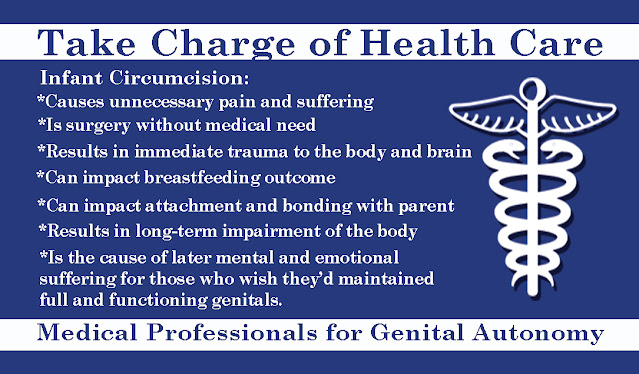 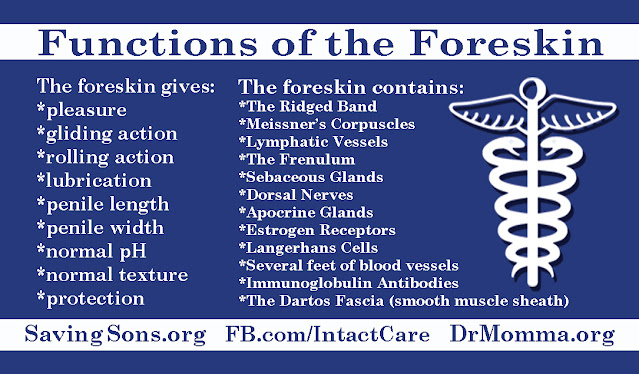 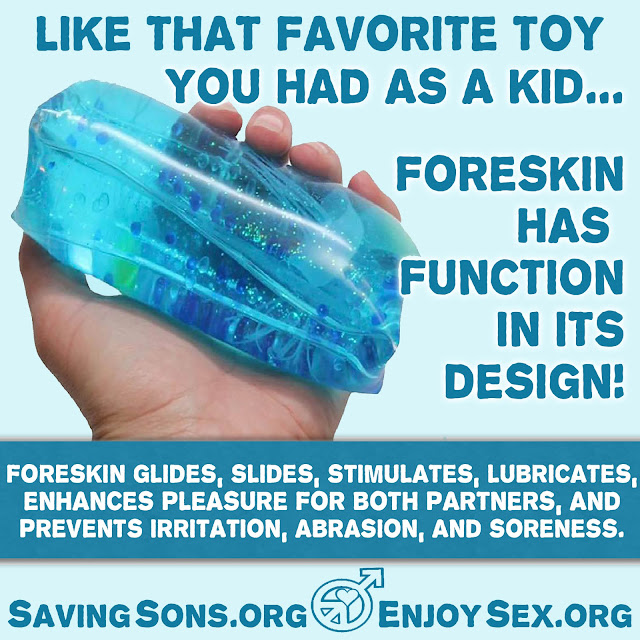 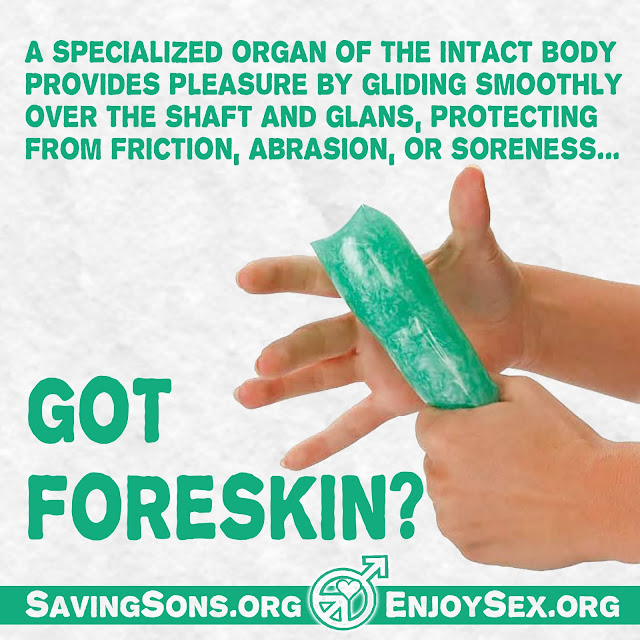