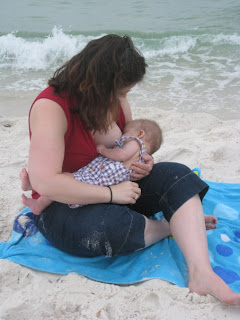 The group of nearly 250,000 members faces threats of removal after a media blitz that chastised the social networking site for its draconian policies toward breastfeeding mothers. The campaign, which garnered national and international attention in over 25 languages from various media outlets around the world, was featured on CNN, CBS News and the Dr. Phil Show among others. Members believe the current threat is directly related to the embarrassment caused to Facebook’s bosses.

Administrators of the group, Hey Facebook, Breastfeeding is Not Obscene! (Official petition to Facebook), were told by the social networking site that the group was in violation of copyright infringement policies. When pressed for details by the group’s admin, Facebook responded by changing the accusation to say the group was posting nudity or sexually explicit material and sending harassing messages to members.

Ms. Joseph says she believes the harassment is due to the social networking site being embarrassed that such a large number of people are against their policies of branding breastfeeding photos as "sexually explicit content."

"We have no idea what they are talking about and they refuse to explain the charges," said Gillian Joseph, an administrator of the group, living in Edinburgh, Scotland. "We checked our pages but cannot see any copyright infringements, and we've certainly sent no harassing messages. Now they are saying it's because we're uploading obscene photos."

The support and advocacy group, which boasts close to 250,000 members from all over the world, wishes to normalize the sight of breastfeeding mothers and children. It currently contains over 4,500 discussion threads on parenting topics, and over 5,700 photos – though many of these have already been removed by Facebook.

"To shut the group down would not only end valuable support, but give a message to the world that breastfeeding babies are somehow obscene. It's just absurd,” said Debra Balcaen, a Winnipeg resident and administrator of the group.

"It is unfortunate and hypocritical that Facebook's administration has targeted this breastfeeding advocacy group for alleged violations when at the same time they happily endorse sexually explicit material from third party applications and paid advertisements."

Initial emails from Facebook were sent on 2/2/10 to the administrators of the group. All responses were handled by Gill Joseph, and the full email exchange can be provided upon request.

During previous campaigns, articles about the group have been featured in The Washington Post and Fox News in the United States, in The Guardian and The Times in the U.K., and in The Globe and Mail and The Ottawa Citizen in Canada.

The group has administrators in Canada, the U.S., UK and Australia who can be contacted on request, but main contacts for media purposes are:

Please note that email may be a better first contact choice, as both women are professionals and mothers of young children themselves. 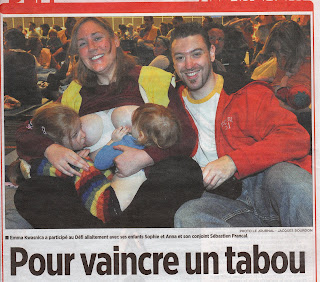 Emma and her husband, Seb, at the Montréal Breastfeeding Challenge in October 2008, with their daughters. Their photo appeared in the Journal de Montréal, a major newspaper in a city of 3.5 million. Emma wonders, "If Montrealers can handle it, then why can't Facebook?"