This full study first appeared in the September 2009 issue of Pediatrics, the scientific journal of the American Academy of Pediatrics.

Car safety seats are one of the most effective ways to protect children from injury and death in the event of a car accident during the first years of life. For the best protection in a crash, car seats require infants to be placed in an upright position. However, this posture can partially compress the chest wall and reduce airway size, resulting in lower levels of oxygen.

The study, “A Comparison of Respiratory Patterns in Healthy Term Infants Placed in Car Safety Seats and Beds,” compared oxygen levels in 200 newborns while stretched out on a safe sleeping surface, positioned in a car bed, or sitting in a car seat. The mean oxygen saturation level was significantly lower in the car seat (95.7 percent) and the car bed (96.3 percent) compared to lying on a safe sleeping surface (97.9 percent).

Previous studies have found similar effects on premature infants. This study confirms that the respiration of full-term infants is also impaired by car seats and car beds.

The study authors suggest these safety devices be used only for protection during travel, and not as replacement for safe sleeping practices or babywearing means.

In other words: leave the car seat in the car.

Wrap/sling/wear your baby when you go places. At home, lay baby down on a safe surface or wear your baby while s/he is napping (safe babywearing in upright positions does not impede oxygen flow, but has been shown to improve it). When lying your baby down, put him/her onto a safe sleeping surface, or snuggle up next to him for a snooze. Do not leave your baby to sleep in a car seat. 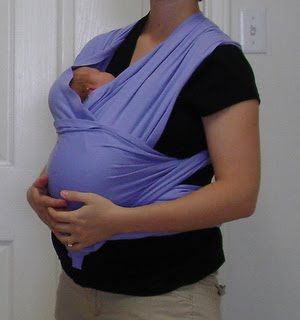 wearing a newborn baby while he sleeps in a Moby Wrap