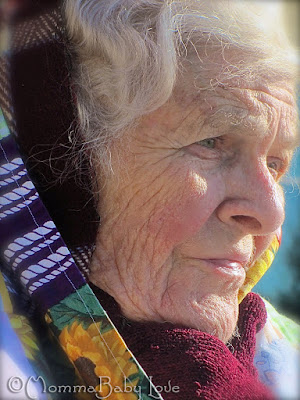 
My own grandmother, at 96 years of age, has quite the stories to tell about birthin' babies and raising kids in 'her day.' She has filled my quest for knowledge with stories of what it was like to mother little ones in times past. Her tales of parenting are enticing, and continuously prompt me to pose further questions... Never is there enough time during our conversations to cover all ground. And there is so, so much we can learn from the generations before us -- both from their successes, and from their mistakes.

At the age of 95, my grandmother read up on the prepuce and circumcision (there are some things that cannot remain un-discussed when you have me as a granddaughter). You may think intactivist issues would be an area a 95-year-old-woman couldn't care less about -- after all, she's not going to be birthing more babes or influencing anyone in this matter. But still, she read, and highlighted, and underlined, and made notes - devouring the information and knowledge that was never provided to her in the 1940s and 50s when she was having children.

She had a change of heart about the matter, indeed. Said that she 'never knew all of this' and that doctors surely should have provided such information to parents at that time... "We were told it was just a small tip of skin and that it did not hurt. They said it had to be done." She continued spreading the articles and books before her on the kitchen table, "I would think this would be something everyone should know about." Ah, yes.

And so, with that, a wise 95 year old woman - mother, grandmother, and great grandmother, became an intactivist in her own way for the first time in her life -- proving to the world that you are never too young, never too old, to become informed and have a change of heart.

This tender video below highlights another older couple - also in their 90s. Fran and Marlo Cowan have been married almost 63 years now, and they, too, have a number of stories under their belt to tell. This video was taken when the couple entered the Mayo Clinic in Rochester, MN and found a piano in the lobby just begging to be played. In an impromptu show, Fran and Marlo entertained others at Mayo that day with their fun rendition of "Old Grey Bonnet."

If nothing else, it will bring a smile to your face.


Update: My grandmother laughed her way to 103 before she flew free from this earth. I will forever miss her fun songs, her giggle, her deep love for her family, and the many stories she would tell. Love you, Grandma.