When Karen was expecting her first baby, she asked her obstetrician if he did routine episiotomies and if he would help her to avoid one, unless medically necessary. "I don't do them routinely," he told her, "but you'll probably need one." When the time came, Karen left the hospital with her new baby and an episiotomy, even though she'd had a normal, uneventful birth.

The American College of Obstetricians and Gynecologists (ACOG) estimates that as many as 90% of women giving birth to their first child in a hospital will have an episiotomy, despite ACOG's official position that "the routine use of episiotomy is not recommended as a standard practice."

Among births occurring at home or at a birthing center under the care of a midwife, the episiotomy rate for first time mothers is estimated at about 10%. Why are these statistics so remarkably different? Do women who give birth in a hospital have a different sort of perineum than those who give birth with a midwife? Hardly. Even if you are having your first baby, there are factors that can help you prevent an episiotomy.

Medical literature first described episiotomies in 1741 as a surgical technique performed to enlarge the vagina so that forceps could be inserted high into the pelvis, thereby assisting in the birth of the baby. At that time it was also widely believed, without any research to support such claims, that episiotomies would prevent gynecological and fetal injuries during birth, such as tearing, damage to the pelvic floor muscles, and fetal brain trauma or injury. While this may have been true for rare instances of unusually long, difficult labor likely to end with such injuries, by the 1930s episiotomies had become routine for all births in hospitals.

Dr. Joseph DeLee, a Chicago obstetrician and the most influential exponent of routine interventions in normal birth, was advocating episiotomies and the use of forceps in his published work as early as 1920. Because of DeLee's authoritative position on this issue and due to the frequency of post-operative complications such as childbed fever and infection, most obstetricians believed that routine interventions should be made during every labor and birthing.

It was also during the late 1920s and early 1930s that, in an effort to end what was perceived to be women's suffering during childbirth, women's rights groups began to campaign successfully for the use of anesthesia for all birthing women. As a result, most mothers giving birth in hospitals were anesthetized with "Twilight Sleep," a technique designed to "streamline maternity's miracle" with a pharmaceutical triple-whammy of morphine, an amnesic drug called scopolamine, and finally a dose of ether or chloroform. This procedure left women unconscious during birth and therefore unable to push their babies out, necessitating routine episiotomies and the use of forceps high in the pelvis.


Beginning in the 1950s "Twilight Sleep" was gradually replaced with spinal, caudal, or saddle block regional anesthetization which allowed mothers to be conscious during birth, but nonetheless left them unable to push effectively due to the numbing effect of the drugs and the standard birthing position, which had mothers trying to push while lying flat on their backs.

Because mothers could now to some extend participate in pushing, obstetricians no longer had to use high forceps or vacuum extraction, resulting in smaller episiotomies. Although criticism of medicated childbirth took root in the 1950s, it was not until the 1970s that the widespread use of medication and interventions in childbirth were called into question. At that time, the popularity of childbirth preparation methods such as Bradley and Lamaze gave rise to a widely supported natural childbirth movement.

Still, the fact that women's bodies were designed to give birth seems to have been largely forgotten. Episiotomies remain a commonplace procedure, though recent research has disproved most of the so-called benefits of episiotomy, while bringing to light a number of risks.

A 1983 review of current medical literature documented that 60% of women with episiotomies reported sever postpartum pain, 25% experienced infection at the site of the episiotomy, and 20% had problems with intercourse for up to three months after birthing. Vaginal swelling was also common. Recent cultural anthropological research into American birth practices by Robbie Davis-Floyd conclude that many women who've experienced episiotomies view it as a kind of cultural ritual "mutilation" introducing th concept that episiotomy involves not only physical risks, but psychological ones as well.

Why do so many health care practitioners continue to perform episiotomies? Despite the research questioning episiotomies, medical school training has historically supported the procedure as a necessary part of most first time births. A practitioner who has experienced episiotomy in his or her own family, or has experienced avoiding one, may view the produce differently, as may the practitioner who has a majority of patients clearly expressing the desire to avoid one. Perhaps, working together, women and their health care practitioners can make episiotomy a procedure of the past. 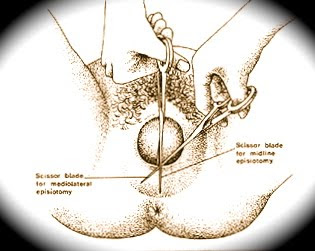 What is an episiotomy?

An episiotomy is a surgical enlargement of the vagina by means of an incision in the perineum, the skin and muscles between the rectum and vagina. It is performed with scissors, either mid-line (straight down) or mediolaterally (on the diagonal). The earlier in second stage labor the incision is made, the larger and more painful it is likely to be. A "pressure episiotomy" is an episiotomy done at the last minute, as the baby's head is crowning. This is the safest, smallest, and generally least painful type of episiotomy.


When may an episiotomy be justified?

Episiotomies are justified in only a few rarely occurring instances. These may include:


How to Prevent an Episiotomy

There are several things you can do to successfully avoid episiotomy. In fact, a combination of factors work together to create a birthing environment in which your perineum can stretch effectively.

Choose a health care practitioner who actively supports avoiding episiotomy. Don't hesitate to discuss episiotomy openly and honestly with your practitioner. Find out exactly how he or she feels about this intervention. Ask what percentage of his or her patients give birth without medication, and of these unmedicated women, how many of them don't have episiotomies. (For the majority of unmedicated women, intervention should not be necessary.) Be sure to ask whether she or he is comfortable and familiar with techniques of perineal massage and perineal support during second stage labor.

The key to avoiding an episiotomy is to first avoid an epidural. Find a birth practitioner who is experienced with natural childbirth, is supportive of your wishes, and is willing to discuss the possibilities for avoiding intervention openly.

Good nutrition is vital to your body's work in preparing the perineum for stretching during birth. Hormonal changes during pregnancy cause the tissues of your cervix and perineum to become extremely thick and elastic. Crucial to this process is an adequate intake of protein, vita- min E, and short-chain fatty acids, which consist of two types of beneficial fats, Omega-3 and Omega-6. Short- chain fatty acids are found in nuts and seeds, cold-pressed oils, all types of beans, and fish such as salmon and tuna.

Perineal massage is a technique that helps to stretch the perineal tissues in preparation for crowning, a similar process to gradually stretching your hamstring muscles over time before attempting a split. An added benefit of perineal massage is that it can prepare you for the powerful sensations of the baby's head crowning, thereby reducing fear. If you have herpes or other vaginal infections, consult your birth practitioner before doing perineal massage.

You or your partner should begin by lubricating two fingers with K-Y jelly, olive oil, or pure vitamin E oil. Make slow, U- shaped downward movements inside the lower part of your vagina, gradually stretching the perineum. Concentrate on relaxing through the sensation. At the time of your baby's birth, your health care practitioner can use the same massage technique as the baby's head crowns. Another technique your health care practitioner can use during birth is perineal support, in which the practitioner uses pressure against the perineum to "splint" it. This alleviates some of the pressure and allows the perineum more time to stretch and relax. 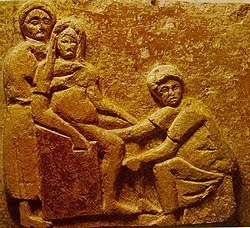 Choosing an effective birthing position can make a remarkable difference in avoiding episiotomy. Squatting is a biomechanically sound position for human childbirth, as it widens the pelvic outlet in a pregnant woman by up to 28%. It also allows for freer flow of circulation, therefore providing good oxygen delivery to the baby; and finally, it shortens and straightens the birth canal and perineum, decreasing pain for the mother. Squatting should be practiced during pregnancy so that the birthing mother is used to and comfortable with the position.

Variations on the "tribal" squat, in which a mother squats on the floor or bed, keeping her weight on her feet, can also be effective, as can the hands and knees position. The most important thing is to avoid the traditional hospital knee or ankle stirrups (on your back) and instead choose the most effective pushing position for you as an individual. Trust your instincts.

Exercise appropriately during your pregnancy with specific training for childbirth. Keeping in great shape safely will give you the strength and stamina to push effectively in second stage labor. Pregnancy-safe aerobic conditioning combined with pregnancy-specific exercises will give you great pushing technique and control. These exercises include pelvic rocking, abductor (legs apart) strengthening, squatting, and Kegels.

Kegel exercises strengthen and condition the pubococcygeous (peG) or "Kegel" muscle, which controls the functions of the urethra, vagina, and rectum. Having a strong Kegel muscle is vital to avoiding an episiotomy, since during crowning, this muscle must stretch to its maximum and then bounce back after childbirth. A weak muscle can be damaged during birth if it's not strong enough to maintain its shape and position during second stage labor. It can be dragged down- ward with the baby and torn or even cut during an episiotomy. A strong Kegel will give you control over your pushing and the body awareness to help prevent a tear.

Avoid an epidural during second stage labor. You may have trouble pushing effectively if you cannot feel your body's natural urges and sensations. In addition, having an epidural will mean the need for leg support in the form of stirrups, preventing you from being able to use an effective pushing position. 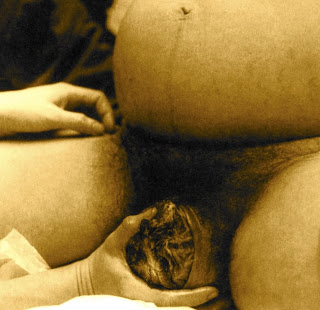 This is a good question, and one that is fraught with controversy. Physicians are often trained to believe that clean, straight cuts done as incisions will allow them to better control the extent of the wound, in addition to making the surgical repair easier. Research has shown that tears occurring naturally in an unmedicated mother happen when the perineum is at its maximum stretch, thereby creating a tear that is not jagged, but quite straight and minimal. Often this type of tear requires a maximum of three to five quick-healing stitches, if it needs any stitching at all.

On the other hand, tearing can be severe for a mother who has had an epidural or an extremely rapid birth, or for someone who is tearing at the top of the vagina, near the urethra. In these cases, an episiotomy may very well be necessary. In other cases, a health care practitioner may put a mother at risk for a severe tear, exacerbated by the incision itself. These situations can be evaluated only at the time of actual birth, and not before.


For more on this subject see:

Article: Getting Through Birth in One Piece

Books: Pregnancy and Birth "Best of the Best" Book List