The Babies Are Coming! 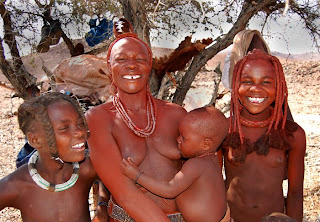 This film - Babies - to be released May 7, 2010 - follows 4 babies during their 1st year of life in four very different locations on earth:

Mongolia (which we all know is ubber pro-breastfeeding!)

Namibia (where parenting is natural and close to the earth, but risk of illness from HIV, malaria, pneumonia, and diarrhea is high)

The United States (where we currently sit behind 44 other countries in our own infant morbidity and mortality rates - and where we continue to fall each year).

I look forward to seeing this film and have to admit my ever so slight jealousy that Alain Chabat (who also thought of the idea) got to see his visions played out on screen before I did! Ah, yes, I guess I am too busy here on the homefront playing Mom to go around filming in various regions of the world. But because Thomas Balmes chose to document this footage (based on Chabat's idea) I am interested to see what he does with it.

I do hope Balmes highlights, or at least mentions, some of the reasons that the U.S. has thee worst rates of infant death and illness of these 4 nations when HIV and malaria are factored for.

I'd like a little discussion as to the reasons that Japan has long time held rates MUCH better than the U.S., and when they started to adopt some of our birth and baby care trends, Japan's numbers became worse (although not by much as they are still 4th best in the world after Singapore, Bermuda and Sweden).

The U.S., on the other hand, has fallen (i.e. reached higher numbers of morbidity and mortality) in the past several years. We have sadly dropped from being ranked 33rd in the world a couple years ago, to 45th in the world (according to 2009 CIA statistics of infant mortality).

Namibia already had high rates of infant death and illness due to perils like HIV, malaria, and U.S. companies' imposed pressure to artificially feed babies amidst poor water conditions - increasing malnutrition and diarrhea. When Americanized birthing styles and mass immunizations (sometimes with good intentions but outdated ingredients or 'left-overs' from the U.S.) started to be imposed on mothers/babies in Namibia, rates of morbidity and mortality started to climb even further. I have not studied this subject enough to know the explanations and solutions, or even to dissect the causes for this occurrence, but it may deserve our attention.

There ARE reasons for morbidity and mortality statistics to exist as they do. I believe it would do us some good to recognize them for what they are -- especially as we live in a nation that likes to think we have it all figured out... obviously we are doing something wrong and the statistics are in our face to prove it, should we ever venture to tune into them.