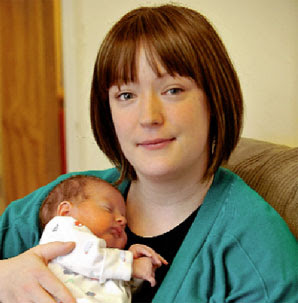 A young mum who was diagnosed with breast cancer while pregnant is appealing against a decision to stop giving donated breast milk to her premature baby.

Dawn Hockey, 28, was 12 weeks pregnant with her second child when she received the devastating news in June this year.

But although Dawn – who is unable to breastfeed until she has finished her treatment – claims medics agreed to provide donor milk until she could feed Alex herself, Stepping Hill Hospital [contact information below] has now refused, claiming it is no longer necessary.

Dawn, who lives with husband Michael, 15-month-old William and Alex at North Road, Glossop, also underwent a single mastectomy while pregnant and is currently halfway through chemotherapy.

She said: "When I was diagnosed the first response from my surgeon was to terminate, but after having three lots of surgery for endometriosis so I could have my children in the first place, there was no way they were taking this baby off me as well.

"I had to stop breastfeeding William which was heartbreaking enough and the agreement was that Alex could be on donated breast milk until I could take over when I finish my treatment in April. But I can’t feed him now, not while I’m on chemotherapy."

"He has been exposed to two doses of chemotherapy in the womb, we don’t know what damage that has done to him, and there are things in breast milk that strengthen your immune system. There are none in formula. This is our argument, and this is what he needs."

Although Dawn’s address means she should be under Tameside and Glossop PCT, she has been treated at Stockport’s Stepping Hill Hospital in the past and is still in their care. She recently transferred to Tameside Hospital – which supports her case – but is waiting for a report from her new pediatrician and says for now all she can do is appeal.

Stepping Hill’s chief executive Chris Burke said: "There is evidence that for sick or extremely premature babies, donor breast milk is of benefit as the first few weeks of life are critical for development of the immune system. However, there is no evidence that there is any benefit in giving donor breast milk to other groups of babies and North West guidelines do not recommend using donor milk for babies over 29 weeks’ gestation. Dawn’s baby was born at 32 weeks’ gestation and therefore there was no clinical reason to continue to provide donor breast milk to a healthy baby which in itself has inherent risks of transmission of infection."

Tameside Hospital chiefs say they support Dawn who also has letters of support from the World Health Organization, UNICEF, two general physicians, and her oncologist.

A spokesman for Tameside and Glossop PCT, which will make the final decision, said: "The baby has now been transferred to another pediatrician and we have requested a report outlining the need to continue on donor breast milk.