If we are entirely against genital cutting of infant girls for religious reasons, then genital cutting of infant boys for religious reasons certainly deserves equal scrutiny and immediate bans by legal measures. Favoring one religion's practice of genital mutilation over another's simply because one is more wide-spread, or more well known in Western nations, makes the barbaric practice no less unethical. Girls and boys deserve equal rights - all humans have the basic human right to genital integrity. 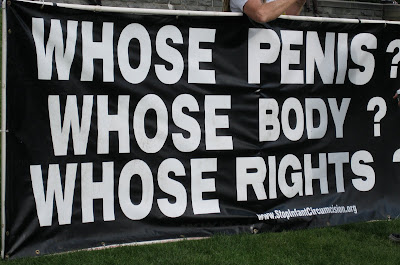 Photo by Danelle with Intact D.C., 2009
By Rebecca Smith
Medical Editor for The Telegraph, UK

Circumcising boys for religious reasons is akin to pulling out their fingernails and could be a breach of the Human Rights Act, an academic has warned.

Dr David Shaw, lecturer in ethics at Glasgow University, argues that circumcising boys for no medical reason is unethical.

He wrote in the journal Clinical Ethics that any doctor who does perform circumcision without a medical reason could be guilty of negligence and in breach of the Human Rights Act as the child cannot consent to the operation and it can be argued it is not in their best interests.

Dr. Shaw wrote: "Imagine a situation where two adherents of a minority religion ask their doctor to pull off their son’s thumbnails, as this is part of the religion in which they want to bring up their son. The pain will be transient, and the nails will grow back, but the parents claim that it is an important rite of passage. I think it is reasonable to say that the doctor would send them packing. In the case of non-therapeutic circumcision, the foreskin will not grow back; why should this procedure be treated differently simply because of the weight of religious tradition?"

The controversial view is likely to cause a storm among Jewish populations who routinely circumcise boys when infants.

He said guidance to the medical profession on the issue from the General Medical Council and the British Medical Association are flawed and should be revised.

He added that the only medical reason for circumcising adult men is that there is some evidence it may prevent HIV in countries where cases are very high but that will not be relevant for doctors working in Britain [or other Western nations].


[End Note: The 'studies' conducted on adult men in Africa in an attempt to show that circumcision reduces HIV transmission have been called into question and found to be grossly unreliable. In all the areas of Africa where men were mass-circumcised as a part of the study, both men and women are now showing HIGHER rates of HIV infection among the circumcised men. Dr. Edell discusses HIV, Africa and circumcision in this video clip.] 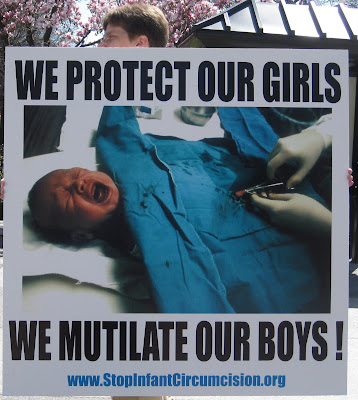