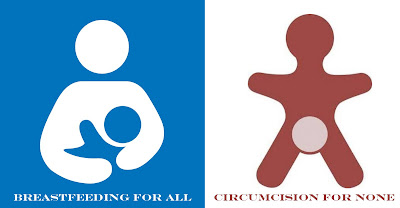 Need another reason to skip infant circumcision? For over twenty years, studies conducted by medical doctors and researchers have documented a connection between circumcision and breastfeeding complications. According to findings, the newly circumcised infant expresses noticeably decreased responses to a mother's attempts at engaging their attention. This "subdued" behavior has been linked by several researchers in separate studies to a subsequent struggle in the achievement of successful breastfeeding. Research has also demonstrated that following circumcision, infants suffer from prolonged periods of non-REM sleep, a symptom that would further contribute to inactive and unreceptive tendencies.

Some of the infants observed in one study were supplemented with formula after circumcision due either to frustration on the part of the mother from failed breastfeeding attempts or because doctors felt the infant was incapable of postoperative breastfeeding. Because infants usually leave the hospital seven to ten hours after the operation (many leave as early as three to six hours post-op) the long-term negative effects of circumcision on breastfeeding is more difficult to determine; however, the observed deterioration in ability to breastfeed may potentially contribute to breastfeeding failure.

Despite the fact that "circumcision is a painful, stressful, exhausting, and traumatic experience for many infants," as many as 45% of doctors ignore the recommendation by medical authorities to use an anesthetic during the procedure. Because conclusive benefits of infant circumcision are not evident, there is no danger in refusing or delaying the procedure. The Work Group on Breastfeeding of the American Academy of Pediatrics officially discourages "stressful procedures" such as circumcision and promotes breastfeeding as "primary in achieving optimal infant and child health, growth, and development."


For more information on circumcision and breastfeeding see: 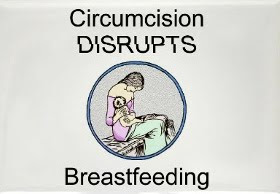 image available at the Intactivism Shop