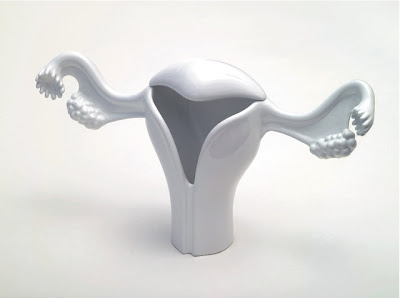 Although my husband laughed when I showed him this picture and told him I'd like one in a slightly reddish-clear shade of blown glass -- I do believe it would fit in perfectly with our Birth & Babies Library [which is quickly becoming a museum of sorts for all things pregnancy-birth-breastfeeding-babies].

I love anything and everything that celebrates the awesome power that is a woman's body. And the uterus is second to none in this category. As the strongest muscle in the human body, the uterus has the ability to grow from the size of a small pear to the size of watermelon. During labor, it contracts powerfully at 100lbs of pressure per square inch! The uterus does 80% of the work in pushing out a newborn baby from within. And even if it is cut open to 'deliver' a baby via cesarean, the uterus heals miraculously fast and is capable to grow, support, and protect a future baby within its' walls just months later.

The uterus is quit the amazing organ! So I kind of dig this vase designed by The Plug & Stephanie Rollin... even if it would be quite the unique conversation starter to have on our dinner table tomorrow for Thanksgiving.

But really, I AM thankful for the uterus!
And you should be too - you wouldn't be here without it. ;)