Circumcision: How Much Does It Hurt?

Reading the article below I had one of those "Well, duh!" moments... I mean, really, what adult would allow the most sensitive 1/3 - 3/4 of their clitoris or penis to be ripped, torn, and sliced apart from their body with just a few Tylenol?! Come on now... And here we are talking about babies -- newborn babies -- who, physiological research shows, have extremely heightened senses and perceptions of touch, feeling, and pain. They must, after all - their eye sight is not that great. They cannot defend themselves. They are helpless newborn mammals relying on their sensation and touch receptors to tell them who is 'mom' and who is not. And above all, they are relying on MOM to protect them from people wishing to do them harm - like those who wish to forcibly strap them down and horrifically amputate healthy, functioning body organs via knife from their tender tiny bodies.

Dr. Mark Reiss, long time physician and member of Doctors Opposing Circumcision, discusses ample research which shows us that even those babies who don't scream and cry while being cut apart - even the 4% who do receive anesthesia - still show significant and detrimental physiological changes in body and brain activity. Those who do not scream bloody murder show (on neurological scans) to be lapsing into a state of neurogenic shock and/or coma (which can sometimes occur immediately). To the untrained eye (i.e. the parent who says 'my baby didn't cry') it appears as though the baby has just fallen asleep... How blind we sometimes are.

Let me pose this question:

How would YOU respond if someone strapped your arms and legs down spread eagle on a table, naked, bright lights, cold air, and started to slice away at your clitoris or penis? What physiological responses would YOUR body and brain go through just to survive this traumatic event?

Babies (shockingly) are human beings too. Born with all the nerves and all the sensation (PLUS SOME!) that you currently have in your body. If you wouldn't let someone take a knife to your genitals, then don't let someone else do the same to your precious little bundle - he is depending on you! 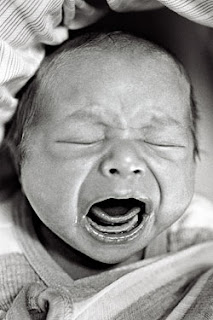 newborn baby boy while being circumcised


The following by Michael Idov

Conventional wisdom once held that because an infant’s nervous system was not yet fully developed, he wasn’t fully capable of experiencing pain. Modern research, however, suggests otherwise.

In a study conducted at Rochester General Hospital in 1994, researchers used heart rate, breathing, and reactions like crying and making eye contact to quantify infant pain. They came to the conclusion that infant Tylenol, the customary pain reliever used in most hospitals, was not nearly enough to do the job.

Three years later, a University of Toronto study suggested that the pain experienced in the course of a neonatal circumcision may even have long-lasting behavioral effects. During a trial of a numbing cream, the scientists discovered that circumcised babies show stronger pain response to subsequent routine vaccination than uncircumcised ones, even after four or six months. (This study employed a technique called neonatal facial coding, which gauges pain from such indicators as “brow bulge,” “nasolabial furrow,” and “eyes squeezed shut.”) The paper concluded that the findings might “represent an infant analogue of a post-traumatic-stress disorder.” The American Academy of Pediatrics has since formally recommended the use of anesthetic in circumcisions.

Advocates of circumcision insist that the above studies rely on circumstantial evidence. They note that many medical procedures are painful, and that infants’ kicking and screaming comes as much from being restrained as it does from the cut.

All that may be true, but the scientific community seems to have reached a new consensus: While the consequences of infant pain are still not fully understood, circumcision hurts plenty.

For statistics on side effects (including death) due to circumcision see:
Cirp.Org/Library/Death