*NOTE: I am NOT advocating for the use of an untested vaccine on children OR pregnant women. I would not use my own children as guinea pigs for a trial run of the H1N1 vaccine. However, parents should be aware of what is being asked of them and their little ones. For more on the 'swine flu' and influenza, see here.

by Maggie Fox for Reuters 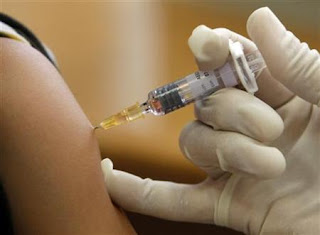 Younger children will need two doses of the vaccine against the new pandemic of H1N1 influenza, U.S. officials said on Monday.

They said tests of Sanofi-Pasteur's swine flu vaccine showed children respond to it just as they do to seasonal flu vaccines, with children over 10 needing only a single dose but children under 9 needing two.

Dr. Anthony Fauci, director of the National Institute of Allergy and Infectious Diseases, said young children will likely need to have their doses 21 days apart. But he said they could receive seasonal flu shots and H1N1 shots on the same day -- something that could ease the logistics of vaccinating children multiple times.

"As we had hoped, in children the 2009 H1N1 vaccine is acting just like the seasonal flu vaccine," Fauci told reporters in a telephone briefing.

Children aged 10 to 17 mounted an immune response that should protect them from H1N1 within 8 to 10 days, Fauci said.

The U.S. Centers for Disease Control and Prevention said 46 U.S. children have died from swine flu, which appears to have first emerged in Mexico in March and which spread around the world to cause a pandemic in only six weeks.

As soon as the new virus was identified, the U.S. government and companies started making a vaccine against it and testing began in August to ensure it was safe and to determine what dose would be needed.

The United States had ordered 195 million doses of H1N1 vaccine from five makers -- GlaxoSmithKline, Sanofi, Australia's CSL, MedImmune and Novartis. With the new orders from Sanofi and MedImmune, that would make more than 250 million doses.

MORE TO GO AROUND

Most countries ordered H1N1 vaccine with the expectation that two doses would be needed, so many now have more than anticipated.

The CDC has designated about 160 million people to be vaccinated first, including pregnant women, people with heart disease, asthma or diabetes and school-aged children.

But that may not mean four visits to a clinic or doctor's office, the CDC's Dr. Anne Schuchat said. "We do expect, based on what we know about vaccines, that it should be fine for the shot to be given on the same day," she said.

It gets a bit more complicated with MedImmune's nasal spray vaccine, she said. Children getting that needle-free vaccine will likely need to get FluMist, the seasonal version, separately from the swine flu formulated nose spray.

H1N1 is now the dominant strain of influenza circulating globally and Fauci said it is possible it may replace the seasonal form of H1N1 also circulating.

"If you look at the history of where new viruses come in, frequently what they do is come back the next year and displace one or even more than one of the circulating strains," he said. "It is a distinct possibility that this might ultimately be incorporated into a seasonal flu vaccine."