Note: The author of this article used a Supplemental Nursing System (SNS) made by Medela. However, all of the adoptive, breastfeeding mothers I have met with have much preferred the Lact-Aid System made by Lact-Aid International and found it worked better for them. If you are thinking of adopting in the future, or need help nursing your baby now, you may wish to look into both systems to see which would best suit your needs. 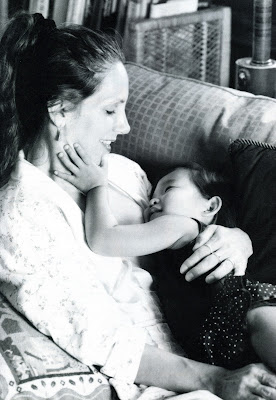 It was Christmas Eve. The fireplace, ablaze with warmth and light, was hung with four stockings: one for my husband, Bill, one for me, one for our nine-year-old daughter, Margot, and one nameless stocking for the adopted daughter whose arrival our family had been anxiously awaiting for months. Although Margot was born shortly before our first anniversary, after eight years Bill and I were still longing for another baby. When we made the decision to adopt, we decided to seek a child from China because we were assured we could adopt a young and healthy infant there.

I had my heart set on something special: I wanted to breastfeed my adopted child. I had breastfed Margot and enjoyed the bonding and nurturing so much that I wanted to share this same closeness with our new baby. I had heard of women nursing adopted babies and hoped this would be possible for me. But how, without a pregnancy, was I to do this?

To induce lactation, the milk ducts of the breasts must be stimulated. This is accomplished ordinarily through the baby's sucking. Stimulation releases prolactin, a hormone that relaxes the mother. As the prolactin builds up in the bloodstream, the body begins to produce milk. Most adoptive mothers do not get a full milk supply, but almost all produce some milk. It is more than likely that a mother who chooses to nurse her adopted baby will need to supplement her milk supply.

An adoptive mother may choose to have some breastmilk already established by pumping her breasts before the baby arrives, as I did. I used a double-electric model, pumping every two to three hours on both breasts for ten to fifteen minutes during the day and once during the night, when possible. Within a few weeks, some milk appeared.

It isn't necessary, however, to pump beforehand to induce lactation; simply putting the baby to the breast every two or three hours will achieve the same results. I had been pumping for two weeks when we received the medical records and a picture of our new daughter, who was three months old and lived in an orphanage in a small city about 400 miles west of Shanghai. It would take at least a month before we were able to make the necessary logistic and legal arrangements to pick her up. This meant that I faced the challenge of breastfeeding a baby who had been institutionalized and bottle-fed for the first four months of her life, but I was not deterred. We named the baby Olivia. She was healthy and beautiful and would soon be in our arms.

After traveling halfway around the world, Bill, Margot, and I arrived at our hotel, ready to meet Olivia. Three days later we received a call saying that our new daughter was, at that very moment, in the conference room on the second floor of our hotel. Rushing downstairs, we first saw little Olivia peeking out from layers of Chinese clothing. She was handed to Margot, whom we had promised would be the first to hold the new baby. We tried to establish eye contact, but Olivia looked away. I stared at her long enough to get a fleeting smile.

We returned to our room to feed our new daughter. In the orphanage she had been fed four times a day, between 6 a.m. and 6 p.m. There were no feedings at night. At four months of age she weighed only 9 pounds. I decided to nurse Olivia immediately to see if she would even accept the breast. Babies have a desire to suck that is just as important as their need for nourishment. To my great relief, when I offered her the breast, she sucked readily.

In most cases, an adoptive mother will not produce enough breastmilk to meet the baby's nutritional needs and will need to supplement her milk supply. To avoid nipple confusion (babies suck differently on a bottle than they do on the breast), the mother can use a breastfeeding aid that provides a supplement while allowing the baby to still suck at the breast. I used a commercial product called the Supplemental Nursing System (SNS). With the SNS, the mother wears a special light plastic bottle around her neck. A thin tube attached to the bottle is taped to the mother's nipple. The baby sucks at the breast and simultaneously receives a supplement from the bottle. The more breastmilk the mother produces, the less supplement the baby takes in from the SNS. An adopted baby will nurse with a SNS even if no breastmilk at all is produced.

When nursing an adopted baby, the mother will need to make use of a SNS for every feeding. In between feedings, one can nurse without a supplement. I offered Olivia a supplement every two hours. Of course, this schedule requires sitting down and nursing many hours a day, but it replicates the normal postpartum period: mothers resting, eating healthy and nutritious food, drinking fluids, and nursing around the clock.

The first time that Olivia nursed with the SNS was a bit confusing. It took some time and experience to coordinate the tubes and flow of milk. After consuming 4 ounces of formula, she vomited. Her caregivers from the orphanage had already warned me that she regularly vomited her feedings. I tried feeding her less formula at each feeding, and this solved the problem.

Eventually, Olivia and I mastered the SNS. She was nursing frequently but, because she had been bottle-fed, used her tongue improperly. Besides causing terribly sore nipples, improper usage of the tongue does not stimulate the milk ducts. The tongue must protrude over the lower gum to milk the ducts of the breast, but Olivia's tongue was curled at the back of her throat. To my distress, my body stopped making milk. A lactation consultant showed me how to use finger-sucking exercises to teach Olivia the correct way to nurse. We continued to use the SNS at each feeding, and, in time, my milk returned.

Just how much milk my body produced is difficult to estimate. Judging from the amount of supplement Olivia consumed, I probably provided about a quarter of her nourishment. Although I had initially hoped to be one of those rare women who produce a full milk supply, I was delighted to be nursing my baby in any way possible. Word spread in our community that I was nursing an adopted baby and needed to supplement. Nine mothers came forth, and over the course of a year donated breastmilk to Olivia. It was a gift of love as well as nourishment. No words can express the gratitude I felt.

Having already nursed a baby, I knew how much babies love to suck. But Olivia was sucking only for nourishment. I wanted her to nurse for pleasure, too, without the SNS. If babies accept and love pacifiers, I asked myself, why wouldn't Olivia suck for pleasure on a warm, soft malleable nipple that emits a drop of sweet milk every now arid then? When she became sleepy after nursing, I would gently pull the tube out of her mouth. She continued to nurse. I would cradle her in the Baby Bundler, a sling that allows skin-to-skin contact, and walk her to sleep, all the while offering her my breast. Gradually she began to accept the breast for comfort alone.

There were other hurdles to overcome. Conditioned to institutional care, Olivia was somewhat aloof and distant. Often, if I held her against my chest, she would arch her back and struggle to get out of my arms. She was so accustomed to being swaddled and left alone to sleep that the rocking, singing, and holding that we used to induce sleep did not work. Bill and I wanted to sleep with our baby, and I felt very frustrated that my mothering style did not suit her.

We struggled to come up with solutions. Bill encouraged Olivia to accept us by lying next to her in bed and gently stroking her arms. I learned to carry her curled up in the side of my arm until she felt comfortable being held against my chest. Eventually she became sensitized to our touch, our rhythm, and our voices. She began to fall asleep at the breast more often, until she came to enjoy it. Gradually the distance she maintained melted away, and she blended more completely into our family. 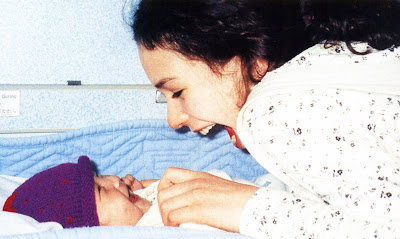 By the time Olivia was a toddler, she ate solids, drank from a cup, and continued to nurse often. Much to my disappointment, however, she still wanted warm milk from the SNS. I wanted her to wean from the SNS so that I would be free from bottles and tubes altogether. One day I inadvertently put donor milk that had a high content of colostrum in the bottle. Olivia tasted it and frowned. This gave me a little idea. I pulled out the tube and gently encouraged her to accept the breast without the bottled milk. "Nurse Momma instead." Within 24 hours she was weaned from the SNS.

Today, Olivia is a bright, affectionate, and loving child with a remarkable zest for life. Despite the problems we had to overcome, it was more than worth it. Because our nursing relationship was lengthy, Olivia has memories of breastfeeding that I hope will carry her through when she processes her experience of being abandoned as an infant. When I hold her in my arms and cover her with kisses, I am amazed to think of what we accomplished. We have a closeness I shall always treasure.

~~~~
For further information about nursing your foster or adopted baby and induced lactation see:
The Adoptive Breastfeeding Resource Website
Dr. Jack Newman and Enith Kernerman: Breastfeeding Your Adoptive Baby or Baby Born by Surrogate
Adoption.com's section on breastfeeding
Induced Lactation
Another mother's experience: My Adoptive Breastfeeding Journey
Dr. Jack Newman Lactation Aid (homemade instructions)
Ask your local La Leche League leaders and/or lactation consultants for names of mothers who have nursed their adopted children.
Books:
Breastfeeding the Adopted Baby, by Debra Peterson
Breastfeeding an Adopted Baby and Relactation by Elizabeth Hormann
Many of the same techniques used to trigger milk supply for working mothers who must be away from their babies all day, every day, are the same gentle parenting measures that will help adoptive moms increase supply as well. For further information on these natural-hormone boosting ideas, see: Balancing Breastfeeding: When Moms Must Work.
For breastmilk donations, look into a variety of resources available.
Additional breastfeeding resources can be found here.
~~~~