How the Stats Really Stack Up: Cosleeping Is Twice As Safe 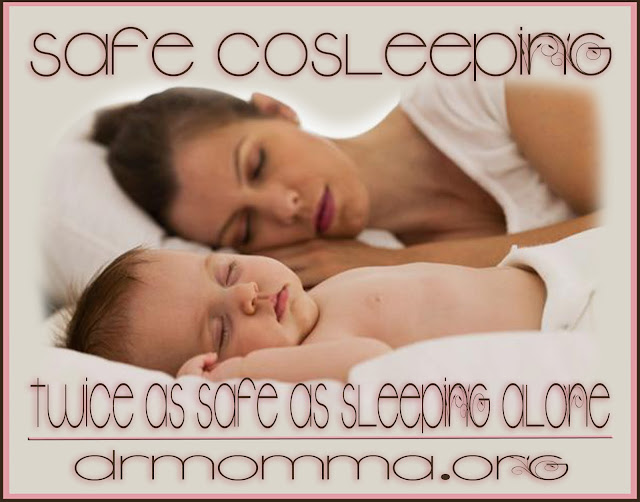 What we need to do is calculate the relative riskiness of an infant sleeping in an adult bed versus a crib. We can do that by dividing a measure of danger for each situation by the prevalence, or frequency, of that situation, and then comparing them. (Oddly, the CPSC never presents relative risks.) Using government figures, we can perform a rough calculation to show that infants are more than twice as safe in adult beds as in cribs. This is aside from the many other advantages of cosleeping or bedsharing, such as increased breastfeeding and physiological regulation, the experience of having slept well, parents' feeling of assurance that their child is well and happy, the enhanced security of psychological attachment and family togetherness, and family enjoyment. (3)

Let's begin by looking closely at the CPSC data. The anti-cosleeping campaign is based on a dataset that contains the 2,178 cases of unintentional mechanical suffocation of US infants under 13 months old for the period 1980 to 1997. CPSC-authored articles about these data reflect only the small portion of deaths that occurred in adult beds. (4) However, these data also have been published with summaries of the cause-of-death codes on all 2,178 cases. (5)

Of these 2,178 infant suffocation deaths, we are certain of only 139 occurring in an adult bed. For 102 of these, we know that a larger person (presumably a sleeping adult) was present, because the cause-of-death code is "overlain in a bed." That does not tell us exactly what caused the death-that is, whether the baby died and then was lain on, or died as a result of being lain on. We can assume that the 37 deaths involving waterbeds occurred in adult beds, since few child waterbeds exist. That gives us a total of 139 infant suffocation deaths known to have occurred in adult beds in these 18 years.

The same data show that 428 infants died due to being in a crib. It is likely that there were preventable risk factors (such as using a crib in need of repair) involved in these crib-related deaths. But that doesn't change our calculations, because the deaths did occur. Similarly, our calculations do not change due to the preventable risk factors (such as intoxication) involved in adult-bed deaths (and other overlying). Note that advocates are raising public awareness to increase the safety of both these sleeping arrangements, with the hope that all these deaths will decrease.

We can't use the other 739 bed- or bedding-related cases in our analysis, because the place of death is not specific enough; these deaths may have occurred in a large adult bed, a single-size adult bed, a child's bed, or a misused crib. Nor can we include the remaining 760 deaths, as we have no idea whether they took place in a sleep situation at all. We also know nothing about the presence or absence of an adult, although a nearby, aware caretaker could have prevented many of these deaths.

So for only 567 (139 plus 428) of the deaths do we know whether they took place in an adult or infant bed. Thus, from 1980 to 1997, 75 percent of the mechanical suffocation deaths of US infants with a known place of occurrence took place in cribs, while 25 percent took place in adult beds.

To estimate cosleeping prevalence, we can turn to the CDC's Pregnancy Risk Assessment Monitoring System (PRAMS).6 PRAMS has been surveying mothers of infants, usually between two and six months of age (but occasionally up to nine months), since 1988. Approximately 1,800 new mothers are sampled each year in each participating state. The sample is rigorously selected to represent essentially every birth in the state, and the response rates are high (70 to 80 percent). Most of the 100 or so PRAMS questions involve prenatal and well-baby care and stressors.

States have the option of adding their own questions and have asked about cosleeping. The basic question asked is, "How often does your new baby sleep in the same bed with you? Always; Sometimes; Never." (Some states add "Almost always.") PRAMS data, therefore, can be used to ascertain cosleeping prevalence in participating states and may be the only data of this kind.

From 1991 through 1999 (the most recent data available) we see that roughly 68 percent (100 percent minus the 23 to 43 percent who "never" coslept) of babies in these states enjoyed cosleeping at least some of the time. Data from the United Kingdom are similar: Helen Ball's Sleep Lab found that around 7 percent always coslept, 40 percent did so for part of the night, and 33 percent never coslept. (6)

Now we can use these figures based on CPSC and PRAMS data to calculate the riskiness of these two sleep arrangements, although it's important to understand the limitations of doing so. For example, these PRAMS data are from only five states (although more will be available in the future), while the CPSC data are from the entire US. The years in which the PRAMS cosleeping data were collected are not the same as those covered by the CPSC dataset, although they overlap. The CPSC covers infants zero to thirteen months, while PRAMS asks about infants two to nine months. The CPSC collects demographic details such as state, income, race, and age of mother (as does PRAMS), as well as time of the death, but they are not easily available to do a more detailed analysis. One or both of these data sources lacks information on impairment of caretaker and other known sleep risk factors, exact sleeping and furniture arrangements during different times in the night, overcrowding and other motivation for cosleeping or crib sleeping, clinical pathology findings, previous health of the infant, etc. Plus, a complete risk analysis should include all causes of infant deaths, including SIDS.

Nonetheless, these data are important population-based sources of information on sleep risks that we would not have otherwise. So let's go ahead and use them to estimate a risk ratio for cosleeping. We take the 25 percent of the suffocation risk in the CPSC data linked to being in an adult bed and divide it by the 44 percent of babies who were actually in adult beds. Then we divide that fraction by a similar fraction for cribs, i.e., 75 percent divided by 56 percent. (If we multiplied each of these fractions by an overall infant death rate, we would have the actual risk for each group.)

This result shows that it was actually less than half (42 percent) as risky, or more than twice as safe, for an infant to be in an adult bed than in a crib. Based upon these calculations using the CPSC's own data, we can say that crib sleeping had a relative risk of 2.37 compared with sleeping in an adult bed.

Therefore, cosleep with impunity - but, of course, be sure to follow safe cosleeping guidelines.

Tina Kimmel, MSW, MPH, is a PhD student in social welfare at the University of California-Berkeley and is writing her dissertation on "The Effect of Welfare Reform on Breastfeeding Rates: Findings from the Pregnancy Risk Assessment Monitoring System." Previously she worked as a research scientist for California's state health department. She would like to acknowledge the state PRAMS epidemiologists who shared their analyzed data for this article: Rhonda Stephens, MPH (Alabama), Chris Wells, MS (Colorado), Ken Rosenberg, MD, MPH (Oregon), Melissa Baker, MA (West Virginia), and especially Kathy Perham-Hester, MS, MPH (Alaska) for her valuable insights. Tina has two children, Rosie (27) and Jesse (21), and one grandchild, Eli (4)-all born at home and all cosleepers.