By Jennifer Thomas
Read more from Thomas at HealthDay 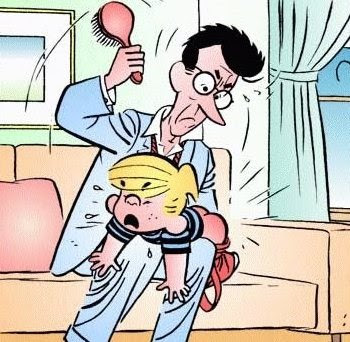 Though the negative effects of spanking were "modest," the study adds to a growing body of literature finding spanking is not good for children.

"Age 1 is a key time for establishing the quality of the parenting and the relationship between parent and the child," said study author Lisa J. Berlin, a research scientist at the Center for Child and Family Policy at Duke University. "Spanking at age 1 reflects a negative dynamic, and increases children's aggression at age 2."

The study is published in the September/October issue of Child Development.

Berlin and her colleagues looked at data on 2,500 white, Mexican American and black children from low-income families. The data included parents' reports about their children's behavior, their use of spanking, as well as home visits by trained observers to document parent-child interactions at ages 1, 2 and 3.

The study found that children who were spanked at age 1 had more aggressive behaviors at age 2 and performed worse on measures of thinking abilities at age 3.

Being spanked at age 2, however, did not predict more aggressive behaviors at age 3, possibly because the spanking had begun at age 1 and by the age of 2 the kids were already more aggressive, Berlin said.

Researchers also looked at the effects of verbal punishment, defined as yelling, scolding or making derogatory comments. Verbal punishment was not associated with negative effects if the mother was otherwise attentive, loving and supportive.

Researchers chose a sample of low-income families because some child behavior experts have argued that when spanking is "cultural normative" -- that is, it's expected for parents to use physical discipline -- the detrimental effects of spanking may be lessened. "We did not find that," Berlin said. "Even in a sample of low-income people where presumably it's more normative to spank your kids, we found negative effects."

"The implication or the suggestion in past arguments is that some kids who are more aggressive or difficult to control might illicit more spanking, but that's not what we found," Berlin said.

Researchers found that black children were spanked and verbally punished the most, possibly because of cultural beliefs about the importance of respecting elders and the value of physical discipline, or because parents feel they have to prepare their children for a racist and potentially dangerous world.

Of all the debates over child-rearing, spanking "definitely touches a nerve," Berlin said.

"It's a parenting practice that has been around for a long time, and one that's also in transition," Berlin said. "In general, the use of spanking is going down. But there is also a contingent of people who really believe in it, who say that's how they were raised and it's a tradition they want to continue."

Elizabeth T. Gershoff, an associate professor in the department of human development and family sciences at University of Texas at Austin, said the study adds to a growing body of research showing negative effects of spanking.

Less is known why spanking could inhibit cognitive development. One possibility is that parents who spank are less likely to use reasoning with their children, something that's good for development, Gershoff said.


DrMomma's Note: When we look at the cognitive functioning of human babies (i.e. those under the age of 36 months), and especially those who are not yet verbal, the brain interprets physical pain and emotional pain in the same way. Both hurt - badly. Aggression against a baby (whether from spanking, leaving a baby in isolation, leaving a baby to cry alone, genital cutting or other sexual abuse, and overall hostility) leads to a spike in cortisol and other stress hormones. When these 'negative' hormones are at an all time high, especially for days on end, it is impossible for the rest of the brain to focus and develop normally.

In addition, while this study neglected to factor in the feeding of babies - whether by breast or artificial feeding means - we know that cortisol spikes happen more often in both babies and mothers when breastfeeding is not a part of the mother-baby relationship. Babies are more likely to be described as 'fussy' and mothers are more likely to be irritated with their infant and/or use physical aggression in handling them. Being held at the breast (especially skin-to-skin) and the act of nursing, keeps hormones in check, releases oxytocin ('the love hormone') and other feel-good endorphins in both mom and baby. In the United States, lack of breastfeeding is correlated with lower socio-economic status, and ethnicity - fewer black mothers nurse their babies than Hispanic or white mothers. This reflects the findings and patterns of spanking in previous studies (sociologically, as breastfeeding decreases, spanking and other physical aggression increases). In addition, neurologically, a lack of human milk leads to lowered cognitive functioning. For all these reasons, it follows that a normal, baby-cued breastfeeding relationship may play a roll in the absence of spanking behavior and a baseline level of cognitive functioning.

The Continuum Concept: In Search of Happiness Lost [book]

Our Babies, Ourselves [book]

The No Spanking Page alternative ideas to spanking


Dr Sears: 10 Reasons Not to Hit Your Child


Healthy Discipline Books and Resource Collection for toddlers and beyond