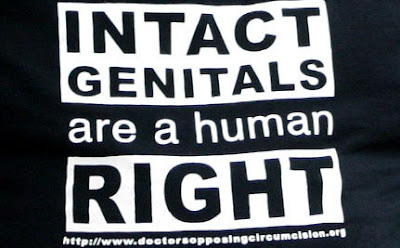 by: Derek Markham
posted on the Fight For Human Rights


The most common surgical procedure in America, circumcision, is unnecessary, yet millions of newborn boys are still circumcised each year.
My oldest son was circumcised at birth, partly because we didn’t know any better, and partly because I wanted him to 'be like me' (”it’s normal, everyone does it”). I decided that I would accompany him and be with him during the process because I needed to know what it entailed, and after witnessing his birth and holding his tiny body to my chest, filled with love and awe at this miracle, I couldn’t let him be taken behind closed doors to have surgery without me.
I’m so grateful that I went with him. Not because I could do anything to comfort him or bond with him, but because my eyes were opened to the trauma inflicted on me and on him (and all other cut men) by the barbaric practice of circumcision.

It was a horrible thing to watch.

His little legs, instead of being tucked up under him as in the womb, were stretched out straight and strapped to the table. Then the doctor casually began the process by fitting the circumcision guide over the tiny newborn penis, making small talk with me while my son wailed in protest at being strapped down to a cold plastic table.

As soon as the doctor began cutting his foreskin off, my son's screams reached peak volume and all I could do was hold his hand and try to comfort him with my voice. But I didn't feel like I could stop the doctor halfway through, so he finished as my son went into shock, his tiny body limp and with a traumatized look on his face. (See this circumcision video).

I still have nightmares about that, and wonder what the psychological toll is for a newborn baby boy during and after circumcision. His most sensitive parts were removed in a traumatic surgery the day of his birth, and it must color his perception of his genitals for the rest of his life.

So why do we still routinely circumcise newborn boys?

It turns out that a number of myths prevail in the minds of those advocating circumcision, myths that are false. And those parents who don't question the myths will usually end up having their son circumcised.

Some myths behind circumcision:

Myth - Circumcision is routinely recommended and endorsed by doctors and other health professionals.
Fact - No professional medical association in the United States or anywhere else in the world recommends routine circumcision as a medically necessary procedure. The American Medical Association calls it "non-therapeutic." At no time in its 75 years has the American Academy of Pediatrics ever recommended infant circumcision.

Myth – Circumcising newborn baby boys produces health benefits in later life.
Fact – Despite common perception, there is NO conclusive link between circumcision and better health. In fact, performing medically unnecessary surgery on a baby boy's genitals creates immediate health risks. Circumcision-related risks include infection, hemorrhage, scarring, loss of part or all of the penis, and even death. These dangers exist in even the best clinical settings.

Myth – Male circumcision helps prevent HIV.
Fact – Only abstinence or the use of condoms can prevent the spread of sexually transmitted diseases, including HIV/AIDS. Moreover, condom usage protects women as well as men. Even if circumcision were effective for preventing disease, removing part of a baby boy's penis at birth to prevent the potential for disease in the future makes no more sense than "routinely" removing healthy gall bladders at birth to prevent the potential for gall stones in later life, or removing healthy teeth to prevent dental caries.

Right now, a move is being made by the Centers for Disease Control (CDC) to recommend circumcision for all newborn boys based on flawed studies that ignore the risks and ethics of circumcision.

Intact America wants to make sure that won't happen, and are gathering petition petition signatures and sending this letter to the CDC:

"As the foremost expert on public health in our country, the Centers for Disease Control (CDC) has a responsibility to share the truth about public health issues that can affect millions of Americans.

Newborn male circumcision is the most common surgical procedure in the U.S. - yet this painful and unnecessary surgery carries serious risks, including hemorrhage, infection, surgical mishap and death.

The role of circumcision in preventing sexually transmitted diseases (STDs) and other health claims has been investigated by public health researchers and remains highly debatable. Only safe sexual practices, such as the use of condoms and abstinence, can prevent STDs, including HIV/AIDS. Circumcision cannot be responsibly recommended as a way of preventing disease."

Help today by signing the petition: Circumcision is a Painful, Costly and Unnecessary Procedure